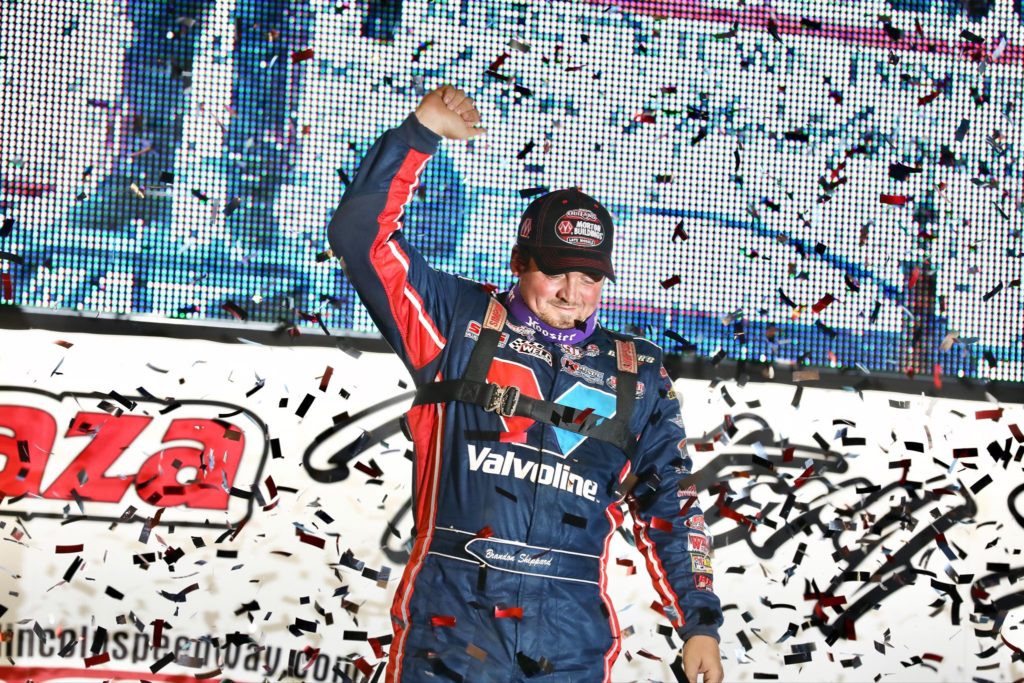 From the “Land of Lincoln” to Lincoln Speedway, Brandon Sheppard just keeps on winning no matter where he goes.

After a torrid stretch of four wins in six nights with the DIRTcar Summer Nationals, the New Berlin, Ill. native kept his reign of dominance alive on Thursday night when the World of Outlaws Morton Buildings Late Model Series kicked off a three-race Pennsylvania swing at Lincoln Speedway.

Winning his Team Drydene heat race and controlling all 50 laps of the feature, Sheppard delivered another untouchable performance aboard the Rocket1 Racing No. 1 Valvoline machine. The 27-year old sensation is now up to a series-high 12 victories on the 2020 campaign and continues to etch closer to the most wins in World of Outlaws Late Model series history (Josh Richards, 77) with his 67th career win in the $12,000 Billy Vacek / Huey Wilcoxon Memorial presented by Viper Motorsports.

“This was a really fun track, Lincoln Speedway puts one heck of a race,” Sheppard, who won in his first-ever appearance at the Abbottstown, Pa. 3/8th-mile, commented in victory lane. “I could race every day of the week right now if they’d let me. This thing is so much fun to drive. We’ve just been so good, it’s hard to miss any of these races. I’m glad to be back out here on tour, especially at new places like this. I had never been here before, so I like checking new tracks off my list.”

While Sheppard commanded the top spot from the drop of the green flag, it was an all-out war for position behind him. In total, four different drivers occupied the runner-up spot over the course of the 50-lapper with all fighting valiantly to derail “The Rocket Shepp,” but none able to accomplish the difficult task.

After pole sitter Dan Stone gave chase in the opening laps, The Bluegrass Bandit Darrell Lanigan entered his Barry Wright ICON No. 29V into the mix and looked to be a real challenge with lap traffic into play. The three-time series champion cut Sheppard’s lead down until the first caution on lap 23 opened the door for a handful of stoppages that halted all momentum for the Union, Ky. driver.

A slew of mid-race cautions offered intense restarts left and right while Lanigan faltered and a pair of Drydene Performance Products entries rose to the occasions. Trading the second spot multiple times, Ricky Weiss of Headingley, Man. and Rick Eckert of York, Pa. went back-and-forth until a lap 37 red flag for an upside down Jason Covert (he was okay) gave “Scrub” the best shot anyone had at taking down the Rocket No. 1.

“I knew he would be good here,” Sheppard said of racing Eckert to the finish. “When he got to second, I was just concentrating on hitting my marks and doing my job. I knew the top was slowing down in turns one and two, but I think I kept charging the entry too much until I figured out how to handle it there at the end. I was just waiting to move down off the cushion. I knew I would have to at some point, but you just don’t know when to make the move when you’re out front leading by yourself.”

Coming down to an eight-lap dash to the checkered between Sheppard and Eckert, fans watched intently as “Scrub” gave B-Shepp a real run for his money down the stretch. Pulling alongside the door of the No. 1 and showing his nose several times, Eckert was right there within striking distance, but struggled to find the momentum to actually pass the current series points leader. While lap 50 came and went, the sand in Eckert’s hourglass ran out and Sheppard scored the win before the No. 0 could make a bid for the lead.

“We dug ourselves in a hole, but boy we rebounded there at the end,” said ninth-starting Eckert. “Hats off to this track crew, they did an amazing job. You could race all over this place, it’s little, but somehow feels almost five lanes wide. Those restarts were real exciting. He took my line down there in three and four, so I thought I’d try to take his away on the other end, but I should’ve just followed him and set him up somehow. I was trying to get close enough on the last lap to slide him, but just couldn’t pull it off.”

Chasing Sheppard and Eckert to the stripe for his first World of Outlaws podium in over a month was Ricky Weiss aboard the Drydene Performance Products No. 7. Sitting second in the series standings, the Canadian ace found a new pep in his step with a third-place effort that came with a resilient fight for the frontrunners.

“I really felt like our car was good enough to make it all the way to the front,” noted Weiss afterwards. “If Brandon made one little, that’s all it would’ve taken and we were right there with him. The race track turned out really nice though. Rick and I had a great battle there before that red flag. I figured out how to diamond down the exit and I thought that was gonna be the ticket, but the track changes so much. I’m proud of this team and proud to be back on the podium.”

Cade Dillard of Robeline, La. followed that trio to the line with a fourth-place effort, further securing the third-place points position for him and his MB Customs No. 97. Closing out the top five at Lincoln was Chase Junghans with a stout 15th-to-fifth run in his Rocket Chassis No. 18 Shop Quik entry.

Current World of Outlaws Late Model Rookie of the Year leader, Ashton Winger, finished sixth in his debut at the track. Trever Feathers of Winchester, VA scored a career-best finish of seventh in the 50-lapper. Darrell Lanigan ended up with an eighth-place result after challenging for the lead in the early stages. Ross Robinson of Georgetown, DE was Thursday’s Hard Charger with a remarkable 26th-to-ninth bid after having to take a provisional. Dan Stone of Thompson, PA rounded out the top ten after slipping from the pole position.

The World of Outlaws Morton Buildings Late Model Series continues the Pennsylvania weekend with a Friday night appearance at Mechanicsburg, PA’s Williams Grove Speedway. On Saturday night, the weekend concludes with a trip to Eriez Speedway in Erie, PA. Tickets will be available for purchase at the gates both nights.