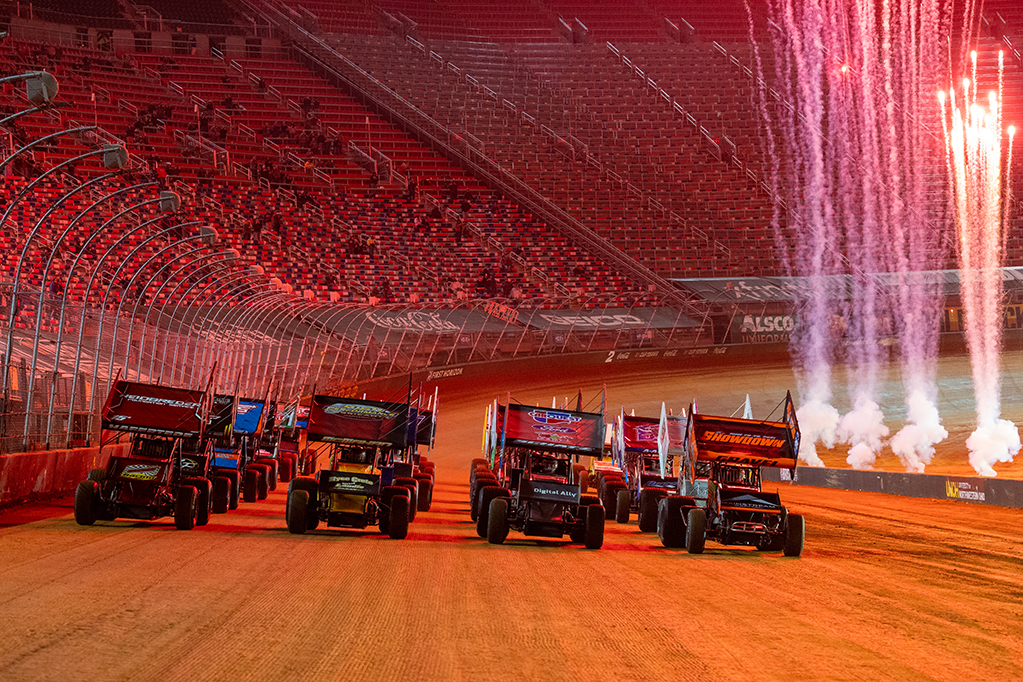 The World of Outlaws NOS Energy Drink Sprint Car Series is coming off a huge weekend at Bristol Motor Speedway, but the fun is only beginning.

This weekend, The Greatest Show on Dirt prepares for a triple-header at two different tracks in two different states. One track is one of the most exciting, intense bullrings on the schedule; whereas the other is hosting their grand re-opening and their first World of Outlaws show in 35 years.

It all starts on Thursday, April 29 at the 1/4-mile Jacksonville Speedway in Jacksonville, IL. On Friday and Saturday, April 30 & May 1, the Series transitions to Odessa, Missouri’s I-70 Motorsports Park, which hosts the FVP Platinum Battery Showdown.

Here are some of the most noteworthy storylines to follow this weekend:

WE’RE JUST GETTING STARTED: Last weekend’s Bristol Throwdown gave the World of Outlaws Sprint Cars a stage unlike anything else. The hype, excitement, and engagement around the return to Bristol Motor Speedway for the first time in 20 years was off the charts. However, that was only the beginning to a huge remaining portion of the 2021 schedule.

68 races remain, several of them being the largest the sport of Sprint Car racing has to offer. We’ve got two $175,000 paydays at the King’s Royal at Eldora (OH) Speedway in July, the 60th running of the Knoxville Nationals at Knoxville (IA) Raceway in August, THE SHOWDOWN week in June where one driver could leave Huset’s (SD) Speedway and Jackson (MN) Motorplex with a total of $180,000, and there’s so much more in between. The Series will travel from Pennsylvania to Washington and California to North Carolina while bringing The Greatest Show on Dirt to fans worldwide on DIRTVision.

“BIG SH*T IN A SMALL BOWL”: There is no greater contrast on the World of Outlaws Sprint Car Series schedule than transitioning from a 142 MPH average speed on Bristol’s 1/2-mile on Sunday to banging it off the fence at one of the smallest bullrings at Jacksonville Speedway.

Drivers are faced with the challenge of forgetting their smooth, crisp attitude on the daunting high-banks of Bristol and remembering how to get their elbows up and race 5-6 cars ahead at a time when racing through lap traffic. Jacksonville Speedway promoter Kenny Dobson said it best, comparing the 1,400 lb, 900 HP Outlaws at the 1/4-mile Jacksonville to “big sh*t in a small bowl.”

In three previous events at Jacksonville: Christopher Bell scored his first-career win driving the Fox Brothers #53 in 2014, Joey Saldana and the Roth Motorsports #83 outlasted Aaron Reutzel for victory in 2016, and Carson Macedo survived Sheldon Haudenschild to take the win in 2019.

NEXT CHAPTER AT I-70: After a 35-year absence, the World of Outlaws Sprint Cars are finally returning to Odessa, Missouri. The revamped and re-established I-70 Motorsports Park comes back on the map with their grand opening this Friday and Saturday, April 30 – May 1 with the FVP Platinum Battery Showdown.

I-70 hosted 19 events from 1981 to 1986 – with Steve Kinser & Sammy Swindell each winning more than five – but the track was converted to asphalt before closing in 2008. Now, it’s back, and set to rejuvenate the Sprint Car scene in Missouri. For teams like Jason Johnson Racing of Rocky Mount, MO and Mason Daniel Racing of Carrollton, MO, it’s another of several home races for them.

ON TOP OF THE WORLD: After his weekend sweep worth $35,000 at Bristol Motor Speedway, David Gravel and the Big Game Motorsports #2 cleaned up every ounce of confidence available on the World of Outlaws Sprint Car tour right now.

Through the first 13 events this season, Gravel had 12 top-ten finishes, but only one victory and one podium. That all changed as the Series returned to its first 1/2-mile venue since opening at Volusia, a type of racing that Gravel thrives on. He’s now won the most features on big tracks with 10 1/2-mile victories since 2019. Which is crucial considering some of the largest paydays of the season come at 1/2-miles like Knoxville, Eldora and Williams Grove.

SHARK STRUGGLES: Just three weeks ago, Logan Schuchart and his Drydene Performance Products #1S were the closest challenger to Brad Sweet atop the championship standing, after all Schuchart started the season with 11 top tens in 11 races. However, since heading east, they’ve struggled with consecutive finishes of 22nd at Kokomo, 19th at Tri-State, and 20th & 19th at Bristol, sending him spiraling from second to sixth in the points.

However, if you dig deep, it’s all circumstance. They haven’t been bad, just unlucky and misfortunate. Jacob Allen, who hasn’t recorded a top-ten finish since he ran seventh & eighth in the first two races at Volusia, has led laps and contended at the front in races since then. Schuchart would’ve won $25,000 at Bristol if it was a 23-lap affair, as he dominated the Feature before a mechanical issue eliminated him from the race.

The Hanover gang will look to get back on track and end their unlucky streak with three chances to park it in victory lane this weekend.

For Schatz and his Tony Stewart/Curb-Agajanian Racing, Carquest, Ford Performance #15, he’s finished third, fourth and fourth consecutively at Jacksonville. After a tough stretch through March and early April, the Fargo, ND native got back into a rhythm at Bristol with back-to-back top-five finishes to rekindle some momentum.

Sweet and his Kasey Kahne Racing w/ Mike Curb, NAPA Auto Parts #49 has improved one spot over every single visit to the Jacksonville, IL facility. He started with fourth in 2014, then third in 2016, and second in 2019. If the trend continues, we’ll see The Big Cat in victory lane come Thursday night.

HOME WIN FOR FVP: Friday and Saturday’s trip to I-70 Motorsports Park comes in the form of the FVP Platinum Battery Showdown. In attendance driving the FVP Parts #21 will be Brian Brown of Grain Valley, MO hoping to give his sponsors a victory in their own event.

Thursday, April 29 at Jacksonville Speedway in Jacksonville, IL
Friday-Saturday, April 30-May 1 at I-70 Motorsports Park in Odessa, MO

Around the Turn: Following this weekend, the World of Outlaws NOS Energy Drink Sprint Car Series returns to The Big E with Let’s Race Two scheduled for Friday & Saturday, May 7-8.