WHAT TO WATCH FOR: I-55 next stop in World of Outlaws’ RETURN to RACING

After a successful return at Knoxville Raceway, the World of Outlaws NOS Energy Drink Sprint Car Series is geared up for the Dydene Double Down Invitational at Federated Auto Parts Raceway at I-55.

The Fri., May 22 and Sat., May 23 events will see a limited number of fans in the stands – for the first time since February – and, like every race, will be broadcasted live on DIRTVision presented by Drydene. Hot Laps will start at 6 p.m. (CT) and racing is scheduled to start at 7:30 p.m. (CT) both nights.

The doubleheader event will see a 62-car field of the best Sprint Car drivers in the world compete to win $6,000 Friday night and an astonishing $20,000 Saturday night. Both races will be a testament to why the World of Outlaws is “The Greatest Show on Dirt.”

Here are the top storylines to follow throughout the two nights:

BACK TO BACK ATTEMPT FOR GRAVEL: With the eyes of the world on him, yet again, at Knoxville Raceway, David Gravel made history on May 8 by winning the Series’ first RETURN to RACING event with no fans in attendance. It was the Watertown, CT driver’s 52nd career World of Outlaws win, moving him past Jeff Swindell to rank 15th on the all-time wins list. 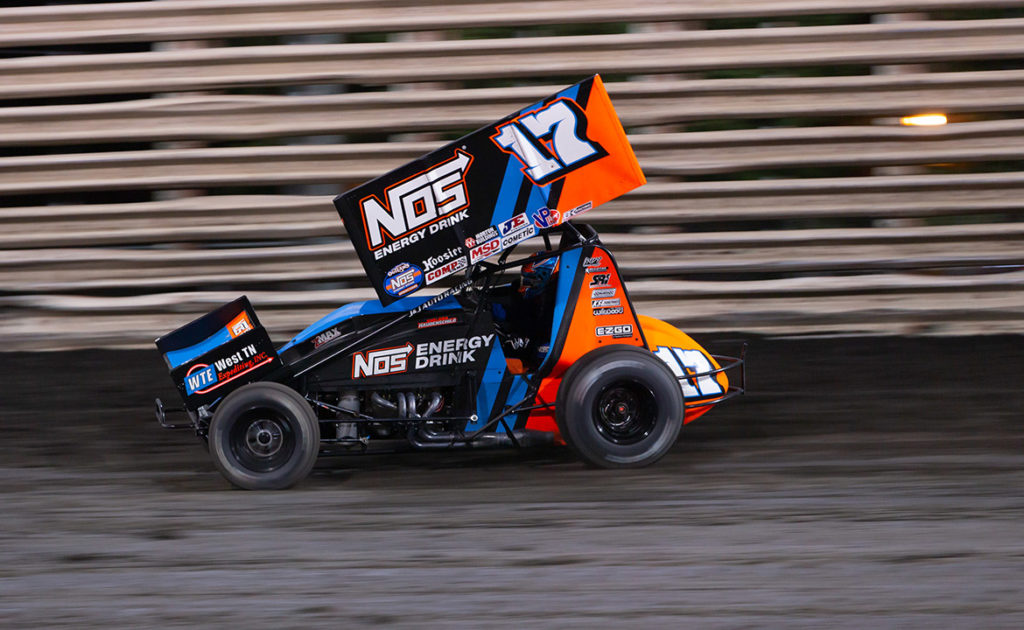 He and his Jason Johnson Racing team will look to, again, make history this weekend by parking their #41 car in Victory Lane at I-55 – this time with fans to in the stands to celebrate with them. Gravel has one win at I-55, which came in 2016.

HAUDENSCHILD THE IRONMAN: Sheldon Haudenschild, of Wooster, OH, made history of his own last year during the Ironman at I-55 with a performance that may not be matched for years, if ever again. In the 55-lap caution free race, Haudenschild led the final 45 laps, won by 10.3 seconds over 10-time Series champion Donny Schatz and lapped up to fifth place.

In his six starts at the track, Haudenschild has finished outside the podium only twice. Driving for NASCAR-star Ricky Stenhouse Jr.’s Stenhouse Jr.-Marshall Racing team, Haudenschild will be on the hunt to score another win in his NOS Energy Drink #17 car. 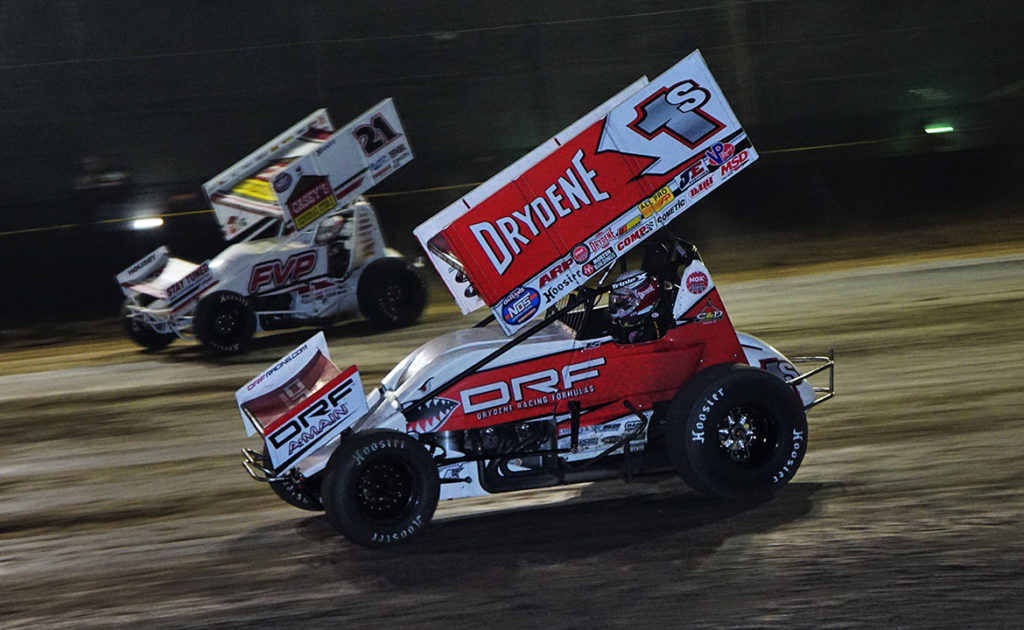 SCHUCHART ON TOP: In the four races this year, Hanover, PA’s Logan Schuchart is the only driver to score a top-five finish in all of them. With a win already at Volusia Speedway Park and a third-place finish at Knoxville, Schuchart is currently the points leader for the first time in his career.

Going into the doubleheader at I-55, Schuchart leads reigning champion Brad Sweet by 10 points. He struggled at the Missouri track in his first 10 starts there, picking one top-10, but has improved immensely in the past two years with his Shark Racing team. He has three top-five finishes in his last four starts –including his 2018 Ironman 55 win in his Drydene #1s car.

SWEET LOOKING FOR TWO: Reigning Series champion Brad Sweet, of Grass Valley, CA, won his first I-55 Feature last year. He and his Kasey Kahne Racing team will be on the hunt for another this weekend after a disappointing ninth-place finish at Knoxville Raceway. A win at the track this weekend would not only be his second there, but also his second of the year. He won at Volusia Speedway Park in February in his NAPA Auto Parts #49.

Sweet has a solid record at the 1/3-mile track. In 16 starts, he’s only finished outside the top-10 three times. He was also the winningest driver on 1/3-mile tracks last year with wins at I-55, Lake Ozark Speedway and Beaver Dam Raceway. 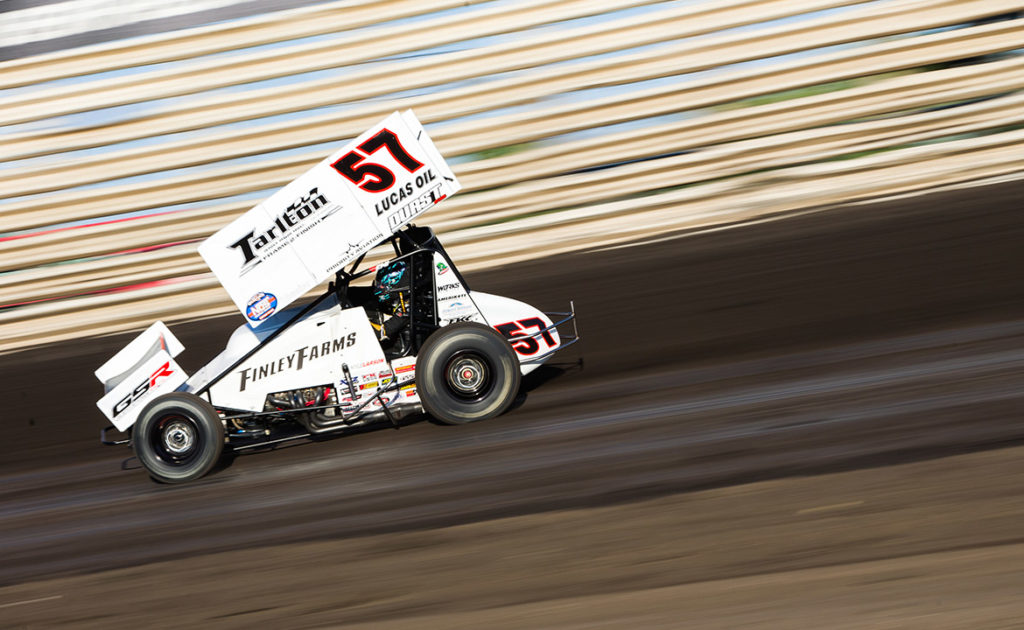 FIRST FOR KAHNE AND LARSON: Racing-stars Kasey Kahne, of Enumclaw, WA, and Kyle Larson, of Elk Grove, CA, will attempt to make their first ever World of Outlaws starts at I-55 this weekend. Larson has competed in all four Series races this year, while Kahne made his first World of Outlaws return in more than a year at Knoxville Raceway.

However, Kahne didn’t transfer to the Feature at the Knoxville RETURN to RACING event, finishing 11th in the Last Chance Showdown. Larson did transfer and finished 10th, after starting 18th – he currently sits 16th in the point standings.

NEW WINNING POTENTIAL: With drivers like Carson Macedo, Jacob Allen, Kraig Kinser, Kyle Larson and Brian Brown still eyeing their first win of the season, a victory by any of them this weekend could see two recorders extended. There have been four different winners in four races this year and five different winners in the past five World of Outlaws races at I-55.