TITLE MATCH AT THE GROVE 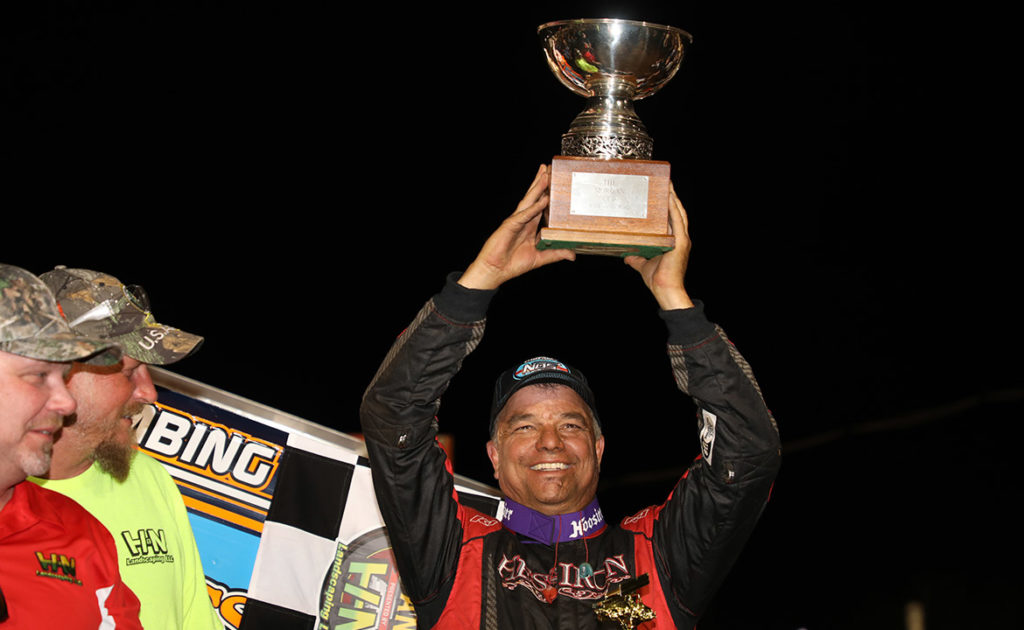 The battle for the Morgan Cup at Williams Grove Speedway Saturday night turned into the title match of the century between the World of Outlaws and PA Posse.

Dewease added another win to that list Saturday night, defeating Schatz to claim the Morgan Cup and his 17th career World of Outlaws victory. The Tony Stewart/Curb-Agajanian Racing driver didn’t make it an easy fight, though.

Schatz got the first punch, jumping to the lead at the start of the race. From there, Schatz set a pace the No. 69K couldn’t match.

Dewease contributed that to his setup, stating it takes five or six laps for his car to get going. Because of that, he said he anticipated Schatz would get the jump on him. He knew the race he needed to run.

“The pace we were trying to run, we were going to be hard on tires at that whole 30 laps,” Dewease said about Schatz’s early run. “But hell, I wasn’t too easy with them.”

Schatz’s early lead didn’t last long, though. On Lap two, Logan Schuchart stopped on the front stretch due to an ignition box issue. The caution allowed the two front runners a quick rest to gauge their early run.

When the green flag flew again, Schatz landed another jab, jumping back to the lead. Dewease kept pace with him, though.

“I was shocked how good I hung with him there on the bottom,” Dewease said. “I thought we’d be alright if I could get by him (Schatz). He knows how to get around here when it’s slick.”

Like Dewease predicted, once he got in six consecutive laps, his car took off. While Schatz rode the high side, Dewease found enough grip on the bottom to wear out Schatz’s lead. By that time the two leaders entered lap traffic, which proved to be an advantage for Dewease.

Schatz struggled to navigate around lap traffic, allowing Dewease to plant the attack he needed on Lap 17 to charge by the No. 15 car and take the lead.

“It just came down to getting through lap traffic,” Schatz said. “I got to the 70 car and I didn’t push the issue, to go across the race car and go in front of him and I didn’t do it. It got me in a funk for a few laps and Lance got by. I got myself back going, but it was too late.”

Dewease then cruised to his second win in four days, after winning Wednesday’s night race at Lincoln Speedway in Abbottstown, Pa. That night he heard the chant, “Posse! Posse! Posse!” in Victory Lane. Then heard it again Saturday night as the PA Posse fans were jubilant to retain the iconic Morgan Cup.

“This rivalry is pretty intense,” Dewease said. “It goes back a long way. We’re some of the few areas that can consistently win against these (Outlaws) guys. We were very fortunate to get it done tonight and keep the cup for another year. Beating Donny is always special because he gets around this place so good.”

While Schatz accepted his defeat, having to settle for second, he laid down a further challenge for the PA Posse fans.

While Schatz and Dewease put on a show at the front of the field, California-native Giovanni Scelzi was the show of the race behind them.

“Just qualified bad, and when you do that it puts you behind the eight-ball,” Scelzi said. “We just kept trucking in the Feature and kept going and going and going. I wish we had a yellow. I think we had something to get back in the top-five.”

Scelzi won his first Series victory at Williams Grove last year, becoming the youngest ever World of Outlaws winner at 16 years old. However, he’s not sure why he meshes with the Pennsylvania track so well.

“I just seem to have some natural speed,” Scelzi said, “I don’t know where it comes from. Seems to be a place I’m comfortable at.”

Both Schatz and Dewease – who credited each other as being exceptional drivers – said they’ve found the set up their comfortable with, leading to another potential title match when the Series returns to Williams Grove Speedway in July.

The World of Outlaws will continue its Northeast swing Sunday, May 19, at Weedsport Speedway in Weedsport, NY.