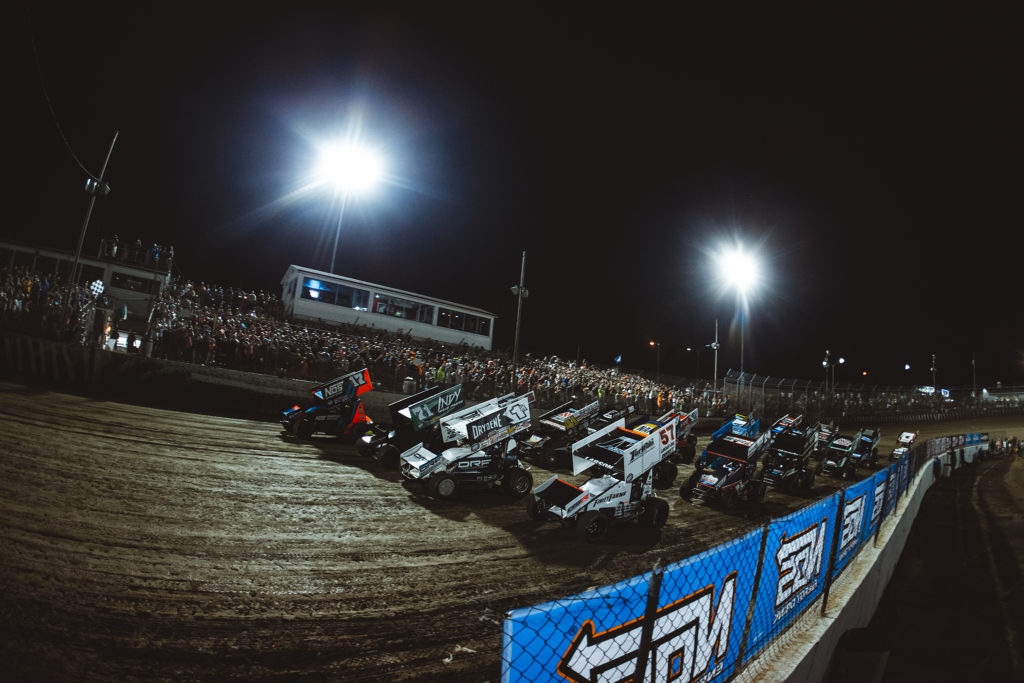 The Ironman 55 is not only a test of man, but his machine as well.

Since 2009, this race at Federated Auto Parts Raceway at I-55 has challenged the stars of the World of Outlaws NOS Energy Drink Sprint Car Series for everything they are worth.

It’s 55 laps of grueling, intense action on a 1/3-mile bullring in the heat of the Missouri summer. Not exactly for the faint of heart.

Next month on August 6-7, the 13th annual Ironman 55 commences again with The Greatest Show on Dirt storming into Pevely, MO for a weekend.

Coming amid the Month of Money, a $20,000 check awaits one man who conquers all at I-55. On top of the money, you get all of the momentum leading into a potential $200,000 payday at the 60th running of the NOS Energy Drink Knoxville Nationals pres. by Casey’s General Stores on August 11-14.

Although he’s never topped the 55-lap Ironman edition, Brad Sweet of Grass Valley, CA certainly enters as the early favorite for the 2021 running.

The two-time and defending World of Outlaws champion is leading the points with 12 victories under his belt and a third-straight title in his sights. Driving his Kasey Kahne Racing, NAPA Auto Parts #49, Sweet has mastered Missouri lately, sweeping all four events the Show-Me State this spring.

Included in that sweep was back-to-back wins at I-55 on April 2-3. Already at four-career wins, he’ll enter the August doubleheader with a chance to become the winningest driver in World of Outlaws history at the Pevely 1/3-mile through 61 total events.

Arguably the most exciting driver in the field is Sheldon Haudenschild, who executed one of the most dominating victories in Series history at the 2019 Ironman 55.

Driving the NOS Energy Drink, Stenhouse Jr. / Marshall Racing #17, Lil’ Haud was fueled up and fired up with his own load of Human Horsepower. In a non-stop, green-to-checkered 55-lap dash, Haudenschild lapped 19 of his 23 competitors and completed the race in just over 11 minutes.

His final margin of victory to second-place was 10.308-seconds. The crowd was in awe.

The Wooster, OH native returned in 2020 and ran second to Kyle Larson, but he also won the preliminary show to become the 15th multi-time World of Outlaws winner at I-55.

Entering the Month of Money, Haudenschild has collected four victories and led 173 laps.

Another five full-time drivers have winning experience to rely on when it comes to the Federated Auto Parts Raceway at I-55.

Logan Schuchart, who scored the first Crown Jewel of the season ($50,000 at Jackson Nationals) last month, is also an Ironman 55 champion. The Hanover, PA native topped the 2018 edition aboard his Shark Racing, Drydene Performance Products #1S. He’s already a three-time winner this season and looking for more momentum as he climbs into the top five in points.

10-time champion Donny Schatz collected two of his 300 career World of Outlaws wins in Pevely. He won once in his own Schatz Motorsports #15 in 2006 and again in 2015 aboard his current ride in the Tony Stewart Racing #15.

An additional two former Ironman 55 champions in Rico Abreu (2016-17) and Kerry Madsen (2014) are expected to join the World of Outlaws next month and chase another title.