THE BACK NINE: Epic Points Battles, Big Races On Tap For Exciting Final Half of 2020 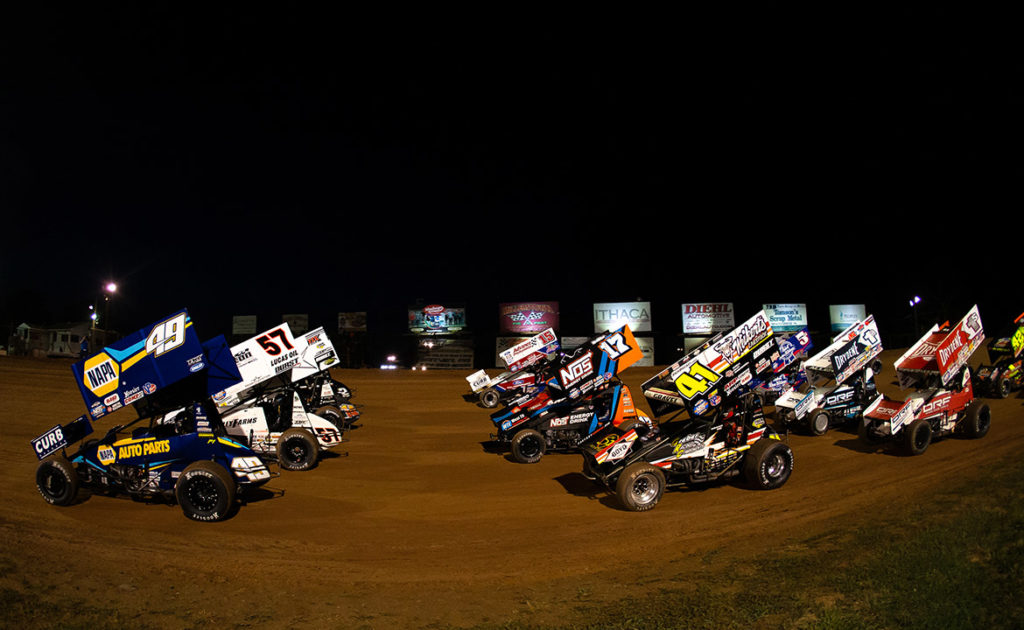 The first half of the World of Outlaws NOS Energy Drink Sprint Car Series 2020 season presented a plethora of memorable moments and exhilarating races that led to 10 different winners, so far. And the back half of the season is shaping up to be equaling thrilling with the championship points battle far from predictable.

Only 100 points separate the top five in in driver points and the top six in team points, heading into the back half of the season this weekend at Wayne County Speedway on Sat., Aug. 1 and Plymouth Speedway on Sun., Aug. 2.

Reigning Series champion Brad Sweet, of Grass Valley, CA, and his Kasey Kahne Racing team currently lead the field atop of the standings with seven wins, so far, in this season. He learned valuable lessons from his championship last year, he said, and is trying to use them to secure another.

“We just want to win,” Sweet said. “I do want to win the points. I’d be lying if I said I didn’t. I think last year when I got focused on the points too much, I didn’t win the races like we could of. We lost a little focus. We’re trying to learn from that this year.

“We’ve already proven that we can win a championship. We don’t have to prove that this year. We want to win races and get the absolute best out of this NAPA Auto Parts car each and every night. I think we’re doing a good job. We had a dry spell there. Some bad luck. This team has gone through a little adversity. It’s trying on us. As long as we can keep overcoming it, be up here on the podium and get back to our winning ways I think the points will take care of themselves.”

The last two weeks showed how quickly the points scenario can change through the field.

Sweet began July with a 114-point lead over Logan Schuchart, of Hanover, PA, after sweeping the doubleheader weekend at Cedar Lake Speedway. One week and three DNFs in a row later, he found himself two points ahead of 10-time Series champion Donny Schatz, of Fargo, ND. Then, when the Series entered its first Pennsylvania swing of the year, Schatz was on track to run away with the points lead himself – just a couple of weeks after being more than 100 points back from the lead.

The he and his Tony Stewart/ Curb-Agajanian Racing team picked up their third win of the season at Lernerville Speedway and reclaimed the points lead for the first time since the DIRTcar Nationals in February. With a seventh-place finish at Lincoln Speedway and his sixth runner-up finish of the year during the Summer Nationals opener at Williams Grove Speedway, he continued to extend his lead.

However, a mechanic issue for Schatz during the final night of the Summer Nationals shook up the points standings yet again. Sweet reclaimed the lead and Schatz fell back to third behind Logan Schuchart.

This year is shaping up to be another career season for Schuchart and Shark Racing. The Drydene-backed driver currently has five wins this year – including the Jackson Nationals – and has remained in the top-three in points throughout the season. His previous best finish in the standings was fifth last year. Teammate Jacob Allen is also having a solid year with four top-five finishes in the first half of the season – including a recent fifth-place run at the Summer Nationals – after securing just two top-fives in 2019.

While he’s in the middle of a tight battle for the championship, Schuchart said he and the team are still learning and working on being consistent every week.

“We started off the season strong, but they were at racetracks we already felt confident at,” Schuchart said. “We’re still learning and getting better and building confidence. I hope can come back to some of these tracks and take what we’ve learned and use it.”

Schatz called 2020 a “developmental year” for he and his Tony Stewart/Curb-Agajanian Racing team as they continue to work on perfecting the new Ford FPS 410 engine. In the early half of the season the team struggle to find consistency, but, minus a mechanical issue at Williams Grove, their performance has improved with multiple podium runs.

Lately, he’s been smiling more when he gets out of his CARQUEST Auto Parts #15, he said, but there’s still more work to be done to clinch his 11th World of Outlaws title.

“Ultimately, we want to win a championship,” Schatz said. “That’s what we’ve wanted to do for the last 15 years. But the point we’re at with the development with the new Ford engine, being down for a couple of months really put us in a downward spiral for a little bit. We had a couple of rare terrible weeks where we couldn’t change things fast enough. But everybody worked hard. Everyone on this team has done a phenomenal job of getting us caught up in a short amount of time and we still have a lot to be learned.

“It’s been a lot more difficult balance that I really expected. I think everyone has such high hopes that unless you’re winning races every night, you know, that’s what’s expected. If you’re not doing that, everyone’s kind of down in the dump. I think this year is a developmental year to be in the position we’re in now. We’re happy to be there. We’re on the better side of it. We could be on the outside a long ways looking in right now and we’re not. We’ll make the best of it from here on out. If it’s a championship, great. If it’s not, well, we’re going to do our best to not let that happen and slip away again.”

Schatz is also three wins away from a career milestone of 300 Series wins.

Rounding out the top-five in points are 2019 Rookie of the Year Carson Macedo and Sheldon Haudenschild. Macedo is 70 points back from Sweet – but is tied with Sweet and Schuchart for the most top-10s this year at 23 – and Haudenschild is 100 points back from the lead. Before suffering a rear end issue during the last race at Williams Grove. Haudenschild was on a hot streak of 18 top-10s in a row.

Both drivers have one win, so far.

David Gravel, who missed a race at Volusia Speedway Park during the DIRTcar Nationals has made his way to sixth in points – tied with Daryn Pittman as they are both 148 points back from the lead. However, by missing the race, Gravel isn’t in contention for the championship. His Jason Johnson Racing team is, though.

JJR is currently only 26 points back out of the team points lead – tied with TSR. They’ve been able to remain in contention with Parker Price-Miller filling in for Gravel at Volusia and claiming three wins with Gravel, so far, this year. The team championship title battle will not be one to ignore this year.

While they contend for a championship title, Mason Daniel and Wayne Johnson are in their own close title hunt. The two Kevin Gobrecht Rookie of the Year contenders are separated by 10 points with Daniel currently holding the advantage.

The final 27 races also include some of the biggest events of the year. The Ironman 55 at Federated Auto Parts Raceway at I-55 will be on Aug. 7-8. The following week will host “The One and Only” at Knoxville Raceway Aug. 13-15, which includes the $50,000 to win Brownells Capitani Classic presented by Great Southern Bank.

Williams Grove Speedway will hold the prestigious Champion Racing Oil National Open on Oct. 2-3 with $65,000-to-win on the line the final night. And about a month later the 2020 season will conclude at The Dirt Track at Charlottle for the Can-Am World Finals Nov. 5-7.

All 27 remaining races pay points, making every race just as important as the next.

The COVID-19 pandemic may have put a couple month pause to the Series at the beginning of the year, but it hasn’t stopped the excitement and epic battles The Greatest Show on Dirt is brewing for the final half of the season.

If you can’t make it to the track, you can still watch every race live on DIRTVision.