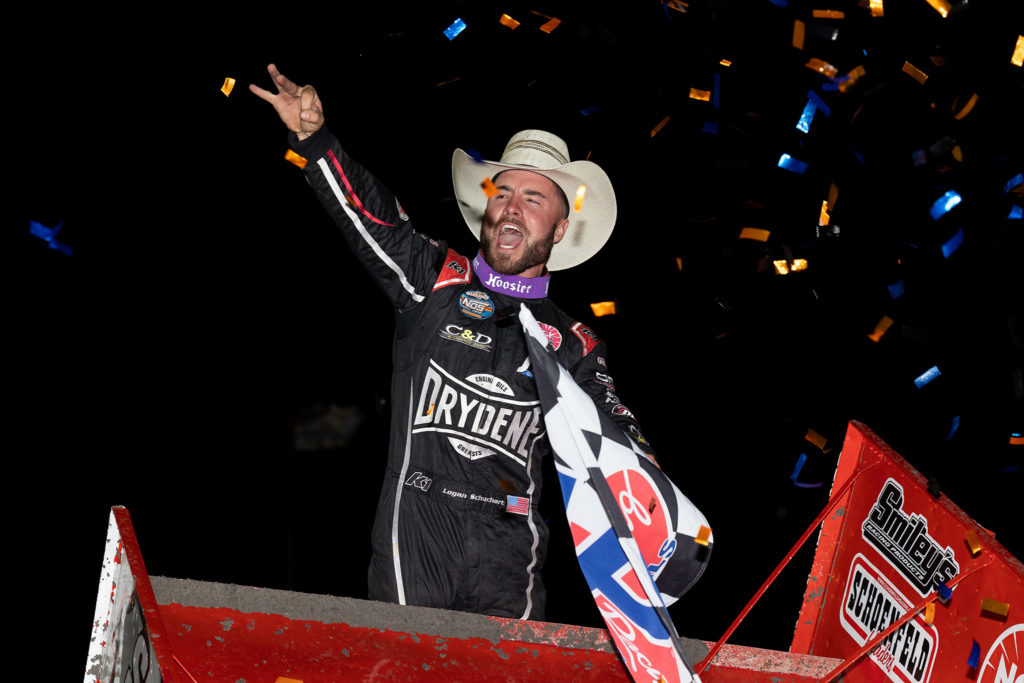 As a little boy, Logan Schuchart was always in awe of his grandfather. The trophies, the stories, and the legend of “Scruffy” Bobby Allen drew that Hanover, PA native to follow his family’s footsteps down the path of Sprint Car racing.

He wanted to be just like grandpa, and now he really is.

All 30 of Logan’s victories since 2016 have come behind the wheel of the Shark Racing #1S, a heartwarming rags-to-riches operation fielded by his grandpa and fueled by pure passion for the sport and never-ending love for his family.

“He’s my mentor, he’s my hero, he’s the guy I’ve looked up to since I was a little kid,” Schuchart spoke on his grandpa. “I always wanted to be like him when I was growing up, I mean he was a legend. To reach 30n wins and tie him at a track like Devil’s Bowl with so much history is just awesome. This is a special one.”

“I’m so proud of that boy,” Bobby Allen said of his grandson. “I want to see him win another hundred races.”

Charging from eighth to first to score the Texas Outlaw Nationals, Schuchart joined icons Sammy Swindell and Mark Kinser as the only three men to ever win three-straight at Devil’s Bowl Speedway in World of Outlaws competition.

Ascending forward in rapid succession, Schuchart drove by Sheldon Haudenschild for third on Lap 19, then whipped by Carson Macedo for second on Lap 23, and already snookered Ayrton Gennetten one lap later to take command on Lap 24.

“That’s the thing about this Drydene crew, we never give up,” Schuchart said. “I was running third when I glanced at the board with I think 21 down and knew it was time to go. I was waiting for those guys to make some mistakes while they were racing each other. I got caught in the wrong spot last night, but we’re back in victory lane tonight.”

The victory marked seven on the season for the Drydene Performance Products #1S and extends a resurgent late-season run with four of those W’s coming in the last 13 races. It’s a momentum-building win for a team that doesn’t show stellar numbers on paper but knows they’ve made progress in 2021.

A $20,000 score in Texas adds to other accolades such as the $50,000 Jackson Nationals victory, DIRTcar Nationals championship, Gold Cup title, and 4-Crown Nationals win, among others this season.

In Schuchart’s success came Ayrton Gennetten’s grief. The 22-year-old Missouri native earned the pole position in only his 28th career start with the Series and proceeded to lead the opening 23 laps. Willing to accept and fend off several challenges by Macedo, the budding pilot appeared poised for a first-career win until the #1S came to life in the late stages.

By the checkered flag, Gennetten slipped back to finish a career-best fourth in his first-ever appearance at the Mesquite, TX 1/2-mile.

“It was pretty cool,” Gennetten noted. “Not a lot of people expect you to lead laps, especially that many. It’s something you work for and dream of competing for World of Outlaws wins as a kid. I wish we could’ve capitalized, but there’ll be the next time.”

Rounding out the podium behind Schuchart and ahead of Gennetten was Carson Macedo in second aboard the Jason Johnson Racing #41 and Sheldon Haudenschild in third in the NOS Energy Drink, Stenhouse Jr. Marshall Racing #17.

Closing out the top-10 at Devil’s Bowl was Donny Schatz in fifth, Brad Sweet in sixth, James McFadden in seventh, Sam Hafertepe Jr. in eighth, David Gravel in ninth, and Giovanni Scelzi in tenth.

UP NEXT: The World of Outlaws NOS Energy Drink Sprint Car Series will conclude the 2021 season next week with the return of the NGK/NTK World Finals at The Dirt Track at Charlotte on Thursday-Saturday, November 4-6. Fans can BUY TICKETS HERE.