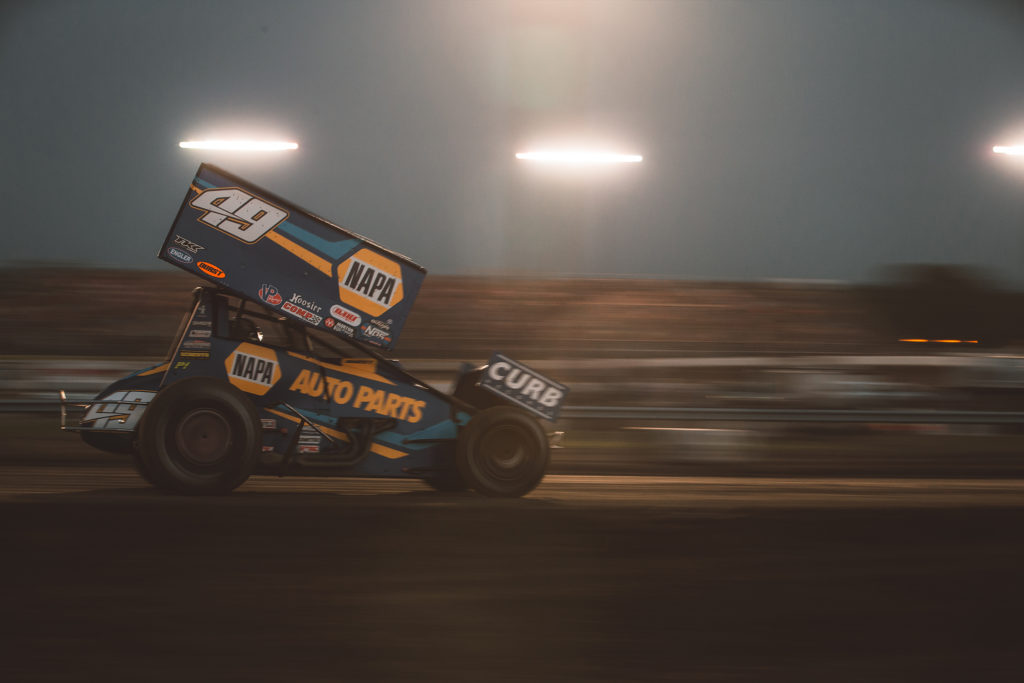 After an April doubleheader was rained out, the newly-formed Halloween weekend took shape to keep the Oklahoma and Texas tracks on the World of Outlaws NOS Energy Drink Sprint Car Series schedule amid a packed 80-race season.

Marking the penultimate weekend before the NGK/NTK World Finals consumes The Dirt Track at Charlotte, this October 29-30 doubleheader could be crucial in the championship chase as the numbers between Brad Sweet and David Gravel continue to grow closer.

Saturday’s stop at Devil’s Bowl in Mesquite, TX brings back the Texas Outlaw Nationals, a $20,000-to-win special for The Greatest Show on Dirt.

For Brad Sweet, who continues to pursue his third consecutive Series championship, the rescheduled weekend is a welcomed sight as The Big Cat thrives at both venues. His only appearance at Lawton resulted in a second-place finish, and the Grass Valley, CA native has 10-straight top-10 finishes at Devil’s Bowl along with a 2017 victory at the 1/2-mile.

The Kasey Kahne Racing, NAPA Auto Parts #49 currently leads the standings by +120 points with another five races until the Series heads back to Oklahoma on October 29.

Giving chase to Sweet, and recently cutting the lead down, is David Gravel and Big Game Motorsports. The first-year pairing has instantly meshed with crew members Cody Jacobs, Scott Vogelsong, and Trey Bowman helping propel Gravel and the Tod Quiring-owned operation to a 10-win season.

The Watertown, CT native was third at Lawton in 2020 but hasn’t been as hot as Sweet when it comes to Devil’s Bowl. In the same 11 starts at the track, Gravel has produced only three top-five finishes, but on the bright side did match his career-best of second last year.

When it comes to Devil’s Bowl, Logan Schuchart has been the man to beat lately. The Shark Racing, Drydene Performance Products #1S has won back-to-back shows at the track and is on his own streak with three wins in the last six Outlaw races.

The only other full-timer with an Outlaw win at Devil’s Bowl is Donny Schatz, who has taken the Tony Stewart/Curb-Agajanian Racing #15 to two victories at the Mesquite oval.

At Lawton, almost all of the Outlaws are on equal footing with only one recent appearance coming in 2019. That race, the first at the track since 1985, was won by Daryn Pittman and the Roth Motorsports #83 squad.

Oklahoma City’s Wayne Johnson has the most laps at the Oklahoma 1/4-mile, racking up several wins in the ASCS ranks at his local track.

As for Kasey Kahne himself, he’ll make his first-ever appearance at Lawton and return to Devil’s Bowl for the first time since nearly winning an All Star Circuit of Champions show in 2020. The former NASCAR Cup Series star continues to compete full-time in the Roth Motorsports #83 as he chases his first-career World of Outlaws win.

If you can’t make it to the track, you can watch Every Lap LIVE on DIRTVision – either online or through the DIRTVision App.

WHAT TO WATCH FOR: Penultimate Weekend Takes Outlaws to Lawton & Devil’s Bowl