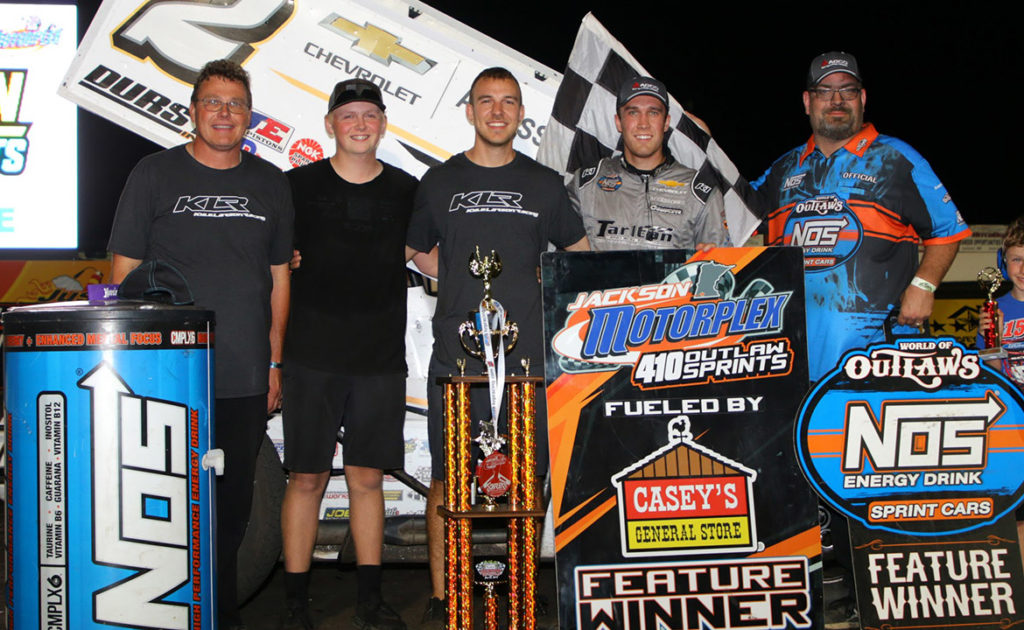 You couldn’t see it, but Carson Macedo was standing up in the seat of his Kyle Larson Racing No. 2 car for all 30 laps of the Feature at Jackson Motorplex Friday night.

Or at least, that’s how it felt to the rookie driver after holding off veterans Daryn Pittman and Logan Schuchart to claim his third World of Outlaws NOS Energy Drink Sprint Car Series race.

“I knew I needed to stand up in the seat and make it happen,” Macedo said. “These Outlaw races are hard to win and you don’t get those opportunities that often to be up front and be there to capitalize on a win.”

The record book will officially show Macedo led all 30 laps. However, the sweat drenching down his forehead and the lack of breath in his speech know better.

Macedo started on the pole of the Feature, by virtue of winning the DIRTVision Fast Pass Dash after Dash leader Donny Schatz blew a motor. When the green flag hit the air, Macedo and Pittman drag raced side by side down the front stretch. Macedo launched his car under Pittman into turn one, sliding ahead within inches of his bumper.

Macedo then sped away, leaving about a three-car gap between he and Pittman.

By Lap seven, Macedo’s pace put him in lap traffic. Behind him, Pittman and Schuchart wrestled for second-place. Schuchart tried to slide in front of Pittman off turn two, but carried too much speed and exited the corner sideways, allowing Pittman to dart back by.

The top three remained unchanged for the next five laps with Macedo cautiously navigating his way through lap traffic. Within those five laps, Pittman closed to about a car length distance from Macedo, while Schuchart stocked them both. The veterans were ready to steal the rookie’s win.

With 15 laps to go, Schuchart powered his Drydene No. 1s around the outside of Pittman in turn one. Then next lap, he attempted a slide job underneath Macedo in turn one, but the Chevrolet Accessories No. 2 car had a strong enough run on the outside to get beside Schuchart before he could slide up in front of him.

When they crossed the line for 13 laps to go, Macedo was given 14 seconds to breathe with no attempts for a pass. But Schuchart was still there. Lurking. Waiting.

With 12 laps to go, Macedo couldn’t sit. Schuchart threw another slide job at him in turn one. This time, it worked. The Shark Racing car cleared Macedo exiting turn two and pulled away down the backstretch.

Macedo was determined to not let the win slip away. With a Hail Marry dive into turn three – closing about a three-car length gap – Macedo sped by Schuchart on the bottom of the track and reclaimed the lead on the exit of the turn.

They charged by the flag stand with 11 laps to go and Schuchart threw his car back underneath Macedo into turn one. They slid through the corner side by side, but Macedo had the advantaged against the cushion and powered to the lead down the backstretch. Behind them, Pittman won his own battle against Ian Madsen to remain third.

“Once I did get by Carson, I was maybe a little too conservative,” Schuchart said. “I had one more shot after I passed him, when he passed me back, to try to throw one more slider on him. I was a little too hesitant to let it go up and I feel like I could have. Once he went by, I feel like he went by in a slower motion, a little bit further than I was expecting him to.”

Six laps went by with Macedo continuing to balance maintaining the lead while negotiating lap cars. He put a comfortable gap between he and second-place, which became a three-way between Schuchart, Pittman and Madsen.

With three laps to go, Pittman slid by Schuchart for second and put together one last effort to run Macedo down. But it wasn’t enough. Macedo cruised to the win during night two of the Jackson Nationals.

“I knew that if we could get in clean air and make good clean laps and get through traffic well we could run OK,” Macedo said.

Pittman finished second and Schuchart held on to third – a big improvement from his 18th-place run during Thursday’s opening night race for the Jackson Nationals.

Pittman’s second-place finish was his fifth top-five in-a-row – after finishing fourth Thursday night. It’s a positive trajectory toward his quest to return to Victory Lane.

“If we keep running, top-three, top-five every night, god, you got to think wins will come,” Pittman said. “We’re close. I think we were closer to winning tonight than we were last night, so I’m happy with the direction we’re going.”

Strong runs from Pittman and Macedo – who finished eighth Thursday night – during the two preliminary opening night Jackson Nationals races have garnered them enough points to lock themselves into Saturday’s DIRTVision Fast Pass, along with David Gravel and Thursday night’s winner Brad Sweet. The remaining four Dash starters will be determined by Saturday’s Heat races.

When it comes to Saturday’s 40-lap $41,000-to-win Feature, Pittman said he thinks he and his team are as good as anyone competing.

For Macedo, Friday night was all about his third Series win. The Lemoore, Calif.-native’s first two Series wins came at Silver Dollar Speedway in Chico, Calif. With his win in Jackson, Minn., people can now stop asking him when he’ll win at another track.

“A couple of people said, ‘We need to see you win an Outlaw race somewhere other than Chico,’” Macedo said. “So, it feels good to do that. This is my third time ever racing at this track.”

His relief and triumphant joy were clear for everyone to see when he went from “standing in his seat” to standing on the back of his car, arms in the air and a joyous yell loud enough to be heard through his helmet.