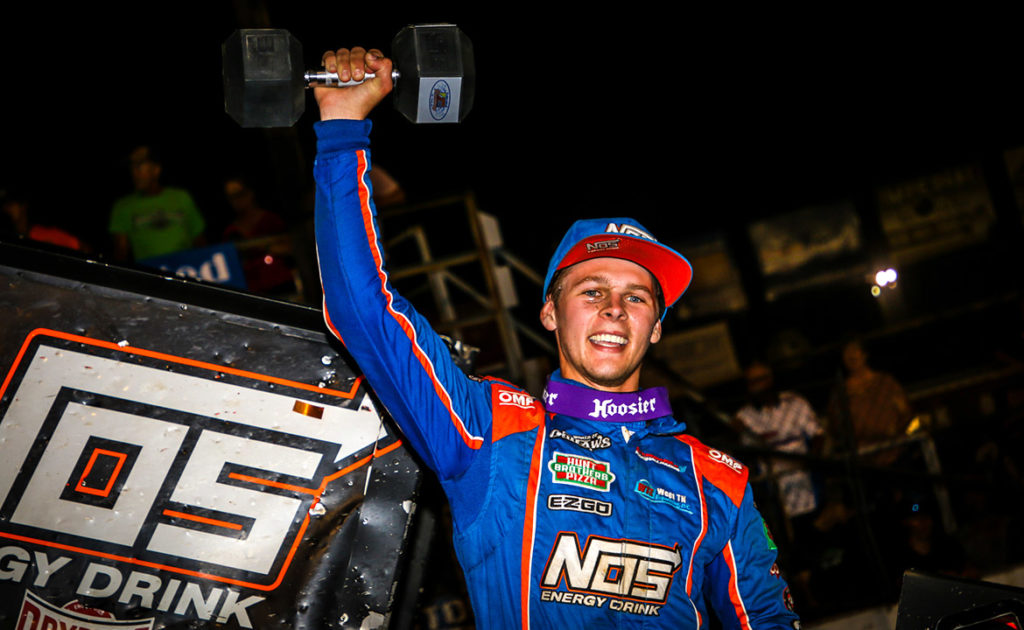 Ironman; a title earned, not given.

On the 70-degree night with 90% humidity, Haudenschild led 45 of the 55 laps in the caution free Feature, sprinted to the finish with an unprecedented 10.3 second lead over runner-up Donny Schatz and lapped up to fifth-place – including Series points leader and Friday night’s winner at the raceway Brad Sweet.

“That right there was just a great car, me feeling comfortable and having a lot of fun,” Haudenschild said.

The fun started for the Wooster, Ohio-native and his Stenhouse Jr.-Marshall Racing team Friday night with a runner-up finish to Sweet in the Night Before the Ironman 35-lap event. Haudenschild then backed up his performance with a second-place finish in his Drydene Heat race, coming to the finish side-by-side with Daryn Pittman. He then charged from fifth to the win in the DIRTVision Fast Pass Dash – a victory he initially didn’t want.

“I wanted to win the Heat race to get a better draw,” Haudenschild said. “Once I didn’t win the Heat my mindset kind of changed starting in the back of that Dash. I really didn’t want to win the Dash. I was thinking a third-place start would be good to see what they (the leaders) were doing.

“But after the track prep, I think winning the Dash was a good move.”

The entire 1/3-mile track was worked on before the 55-lap Feature, creating a new tacky racing surface.

When the 55-lap Feature went green, Schatz rocketed around the outside of Haudenschild on the exit of the first corner to take the lead. Tim Shaffer did the same the next corner, moving Haudenschild to third.

Five laps into the race – which saw lap times in the low 11 second bracket for the majority of it – Schatz caught lap traffic. At the same time, Haudenschild found his rhythm and charged his way back by Shaffer for second.

Then, in the time it takes to snap your fingers, the NOS Energy Drink No. 17 was on Schatz’s bumper. No matter where Haudenschild placed his car on the track he found grip. The 10-time Series champion was prey with no protection.

On Lap 10, Schatz covered the high side into turn one, while Haudenschild launched his car to the middle lane. Haudenschild’s tires held the better relationship with the clay surface and powered him by the Toco Warranty No. 15 car.

“I was really worried once [Shaffer] and Donny got by me,” Haudenschild said. “I didn’t quite know what to do. Once we got into traffic, I had the mindset I was going to get around them and run consistent laps.”

From there, Haudenschild showed his strength. Showed his endurance. And showed his will power. He was the man without fear. His charge through lapped cars looked more like a game than a challenge. Whether it was a slide job to drive by several cars at a time or going three-wide between two lapped cars, Haudenschild didn’t hesitate to make the move.

Once he lapped his way to the top-10, Sweet gave him his biggest challenge of the night. The two dueled for laps, with Sweet aggressively charging his way back by Haudenschild several times to remain on the lead lap. However, no one could match the No. 17 car.

Haudenschild eventually slid his way by Sweet with 17 laps to go and continued his hunt through the field. Schatz and Pittman’s battle for second-place was quickly going from being a battle behind Haudenschild, to one in front of him.

The two series champions dueled for the position throughout the race, but Schatz prevailed with Pittman never finding a strong enough run to get by the reigning champion. However, with Haudenschild out of sight, they thought they were potentially battling for the win.

“I thought I actually won; I couldn’t see him,” Schatz said. “I thought maybe he had run out of fuel or pulled off or something. I can’t believe it went green to checkered.”

He added all he could do was commend Haudenschild on his performance and applaud him.

“That was a whoopin’ right there,” said Schatz, who is now two points behind Sweet in the Series point standings.

Pittman also stated he thought he was battling Schatz for the win at the end. He was happy with the result, though, after a few weeks of undesired finishes.

“Really, it wasn’t that physical at all,” Haudenschild said. “Keeping your mind right, making smart moves. I looked up at the board on Lap 51 and I probably shouldn’t have, ‘cause I think I did make one mistake after that. When the board is right in front of your face it’s hard not to. Especially in this long of a race. I was trying to play it cool and wanted to get it over with. Fifty-five laps is a long race.”

At the end of those 55 laps, though, celebration. After climbing to the top wing of his Sprint Car, spewing NOS Energy Drink all around Victory Lane, Haudenschild was greeted with congratulatory remarks and a hug from his hero – his dad.

“It was pretty awesome,” Jac Haudenschild said about his son’s win. “He lapped me a couple of times, so I know he must have been going pretty good.”

Haudenschild’s victory earned him a $20,000 payday and his second win of the season – seventh career World of Outlaws win overall. After some struggles in the first half of the season – missing five Features – he and his team have been building momentum in the summer months.

“It’s huge,” Haudenschild said about the win. “Just to get it for our guys. Build a little bit of confidence. Put another win on the calendar and just keep working on it. I feel like we still have work to do on different kinds of tracks. Definitely this track is kind of my style.

“It’s been a little bit of a struggle the beginning of the year. We’re not quite where we want to be win wise, but we’re working at it and I feel like we’re doing it at the right time.”

He’s leaving Missouri not only with the confidence of another win, but the prestige of a new title.

Sheldon Haudenschild is the new Ironman.

The World of Outlaws NOS Energy Drink Sprint Car Series from Wednesday, Aug. 7, to Saturday, Aug. 10 will be at Knoxville Raceway in Knoxville, Iowa for the NOS Energy Drink Knoxville Nationals presented by Casey’s General Stores. Get tickets and more information.