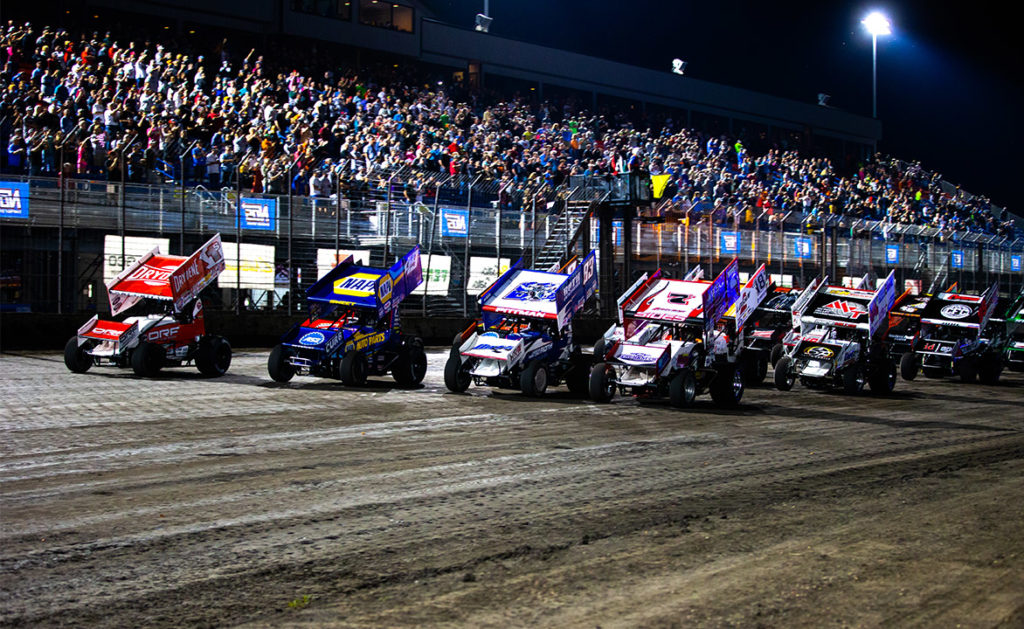 Tonight, points are obsolete. Caution is an unknown concept. Winning matters more than it has all year for the World of Outlaws NOS Energy Drink Sprint Car Series.

More than 40 of the best Sprint Car drivers in the world will compete for the 42nd Annual AGCO Jackson Nationals title at the Jackson Motorplex with $30,000-to-win on the line – the biggest Sprint Car purse to date this year.

Two-time and defending AGCO Jackson Nationals champion Brad Sweet and Logan Schuchart each won a preliminary race Friday evening, placing them in the top four in points with Daryn Pittman and David Gravel for the weekend. Those four drivers are locked into the King of the Hill Dash, which will line up the first four rows of the 35-lap Feature.

There will be four Qualifier races – lined up by where drivers rank in points after the first two preliminary nights, minus the top four. The winner of each Qualifier will also go to the King of the Hill Dash. The top four will transfer to the Feature and the rest will make up the C-Main and Last Chance Showdown.

Once the field is set, fans at the track and around the world watching on DIRTVision will get 35 laps of The Greatest Show on Dirt around the 4/10-mile track.

Sweet, the reigning Series champion, has again been one of the most dominate cars this year. His win at Jackson Motorplex Friday evening was his fifth World of Outlaws win of 2020 and third consecutive 410 Sprint Car win at the track. A poor qualifying effort on Thursday put him behind in points, but “The Big Cat” and his Kasey Kahne Racing team have a strong package. They’re the only team to finish inside the podium in the two preliminary races.

“The NAPA Auto Parts guys have worked hard all week to get ourselves out of that bad qualifying effort,” Sweet said. “Now it’s all about [Saturday]. There’s a big prize on the line and I think we’re in contention. That was half the battle.”

While Schuchart didn’t finish inside the podium both Features on Friday, he did finish inside the top-five in both and put on a dominating performance in the second preliminary race by winning with a close to five second lead. Aside from a couple of finishes outside the top-20, Schuchart and his Shark Racing team have been on par with Sweet for most of the season. He enters the night as the points leader.

Ten-time Series champion Donny Schatz and his Tony Stewart/Curb-Agajanian Racing team found speed again during the second preliminary race with a fifth-place run – his first top-five and top-10 in four races. While he ranks 18th in points after the first two races and will have to try and race his way into the King of the Hill Dash, Schatz is well versed in how to claim an AGCO Jackson Nationals title. He won his first title at the track in 2018.

Pittman, Gravel, Sheldon Haudenschild, Parker Price-Miller and Jacob Allen have also shown speed throughout the weekend. Pittman led laps Friday night before Schuchart passed him and he had to settle for second. Gravel, Haudenschild and Price-Miller have been consistent inside the top-10. And Jacob Allen had an impressive run during the second round of competition Friday night. He earned Quick Time and charged from 21st to ninth in the Feature.

With more than 40 drivers vying for the illustrious title, the 42nd Annual AGCO Jackson Nationals is shaping up to one of the most exciting events of the season, so far.