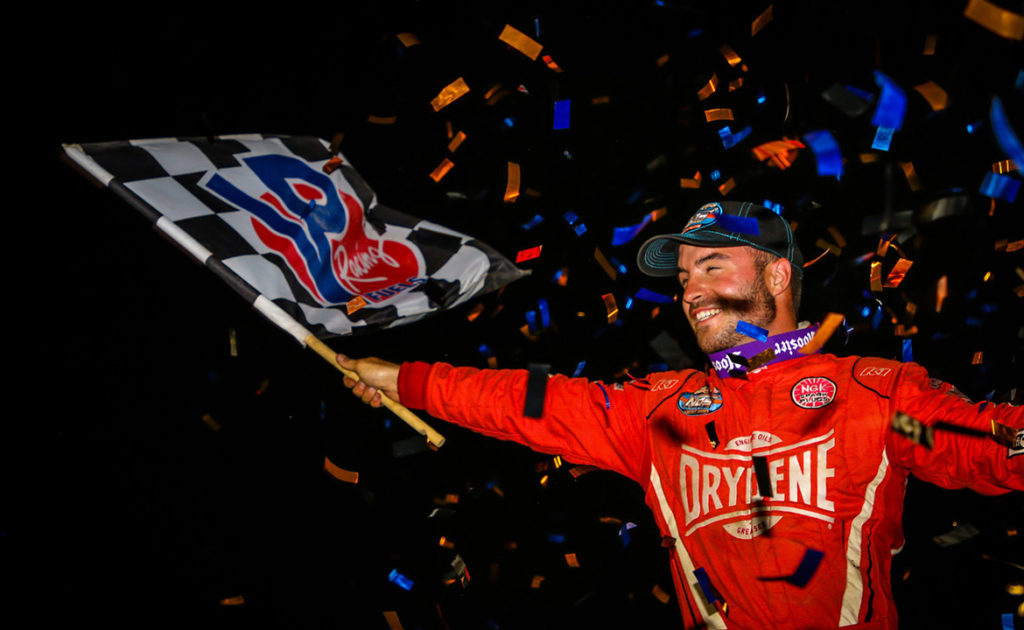 For the Pennsylvania-native that number always stopped at four. He’s had seven second-place finishes since his fourth win of the year in June. Always close. But never quite enough.

Until Friday night at Skagit Speedway. Schuchart claimed his first victory at the 3/10-mile speedway and the illustrious fifth win of the season.

“Having my grandfather by my side since the beginning, he’s the main part of why this team is where it is, and really everyone together, but he’s the boss, the man in charge,” Schuchart said. “The most Outlaw wins he had in a year was five, so that was my main goal at the beginning of the year to at least get that. It’s pretty cool to do that with him and the rest of our team.”

Schuchart and his Shark Racing team at first looked destined for another runner-up finish as the night progressed. He finished second to Kraig Kinser in his Drydene Heat race and then second to Kinser again in the DIRTVision Fast Pass Dash.

While Schuchart was hungry for another win this year, Kinser had his eye on his first victory since 2017.

In the Heat race and the Dash, Kinser got the jump on Schuchart at the start both times, able to clear the Drydene No. 1s down the backstretch and pull away to the win.

When the 30-lap Feature went green, Schuchart was ready. He stayed side by side with Kinser into the first turn. Kinser, on the bottom, edged Schuchart on the exit of turn two, but the Shark Racing driver had the better run on the outside and powered by the Mesilla Valley Transportation No. 11k for the lead.

Both drivers contributed the feat to larger fuel loads for the Feature.

“I got on the gas, got a little high, it really wasn’t that bad down the straightaways, but when I got into one it wouldn’t turn, I had to slow down too much and he ripped the top on me,” Kinser said.

Schuchart pulled away by several car lengths, but a caution two laps into the race brought Kinser back to his tail tank. On the restart the Pennsylvanian picked up where he left off. He rocketed in front of Kinser by almost two car lengths before entering turn one and then ran away with the lead.

Kinser said he couldn’t hang with Schuchart in traffic.

Schuchart caught the back of the field by Lap six, but the slower cars didn’t hinder his performance. He maneuvered around them with ease, never losing his quick pace. However, in the closing laps, Schuchart said he felt like he fell off a little bit.

“For the first half, three-quarters of the race I could run up on any car that is in front of me and run a different line and go right by them,” Schuchart said. “There at the end I caught up to Shane (Stewart), but I wasn’t gaining anymore. It’s hard to tell how close Kraig is. You’re just running your own race at that point.”

At the end of the 28- lap run to the finish, Schuchart crossed the finish line with a 4.6 second lead over Kinser.

“I’ve wanted to win here for a couple of years now, since we’ve been coming here,” Schuchart said.

While Schuchart celebrated breaking his streak of second-place finishes, Kinser was celebrating his runner-up finish. It was his fourth top-five of the year and first podium finish of the year, too.

“Struggled a little bit the last couple of weeks, but this feels pretty good,” Kinser said. “Obviously would’ve liked to have gotten the win, but just the way it goes. I’m happy we had a quick car from the time we unloaded to the checkered flag.”

Rounding out the podium was former full-time World of Outlaws driver and Burlington, Wash.-native Jason Solwold. He was also fast all night, making the Dash and then holding onto the third-place spot throughout the Feature.

“We definitely came out of the box good,” Soldwold said. “Third quick and third in the main event there, not too bad.”

Shane Stewart earned the KSE Hard Charger award by charging from last on the grid – 18th – to 13th. It was a small victory after flipping on the opening lap of his Heat race – that resulted in him throwing a few jabs at Carson Macedo, who had made contact with him.

David Gravel and his Jason Johnson Racing were the best out of the box to start the night by setting a new track record of 10.578 sec. – Gravel’s 14th Quick Time of the year. He broke his streak of consecutive podium finishes since winning the Knoxville Nationals, though, with a sixth-place finish. However, he was still able to gain points on 10-time Series champion Donny Schatz – who finished eighth.

Schuchart – 298 points behind Schatz – knows it would be hard to get in the mix with the top three in points, but has his eye on fourth-place, currently held by Daryn Pittman. He’s currently 34 points behind him.

“We’re kind of close to Daryn there in points, it would be nice to see if we could get him,” Schuchart said. “My best finish in points is sixth, last year. We’re fifth right now, I’d like to get to fourth and stay consistent. Keep learning as a program.

“We had two new guys with Ron Helmick and Ben Whitman this year and they’ve improved tremendously since they’ve started. I just want to improve the team and keep building this team from what it was five years ago and keep heading in the right direction.”

Tying records with Bobby Allen is a good start.

The World of Outlaws NOS Energy Drink Sprint Car Series will return to Skagit Speedway on Saturday, Aug. 31, for the final night of the Series’ doubleheader at Alger, Wash. Track. For tickets call (360) 724-3567.

As always, if you can’t be there in person, you can watch all of the action LIVE on DIRTVision.com.