Schatz Sweetens the Season with Win 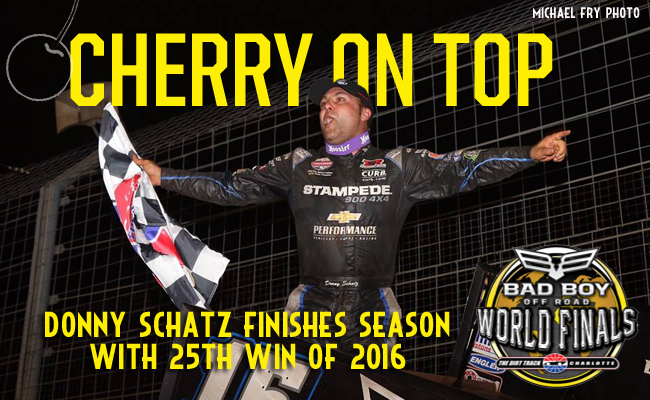 Schatz Sweetens the Season with Win

CONCORD, N.C. – Oct. 29, 2016 – Donny Schatz orchestrated the celebration of his 229th career trip to victory lane differently Saturday night at The Dirt Track at Charlotte. The 20-year World of Outlaws Craftsman® Sprint Car Series superstar – as usual – hoisted the flag into an erupting confetti machine after the Bad Boy Off Road World Finals. But the thousands of fans erupted too when he casted the VP Racing Fuels checkered flag into the stands among the falling confetti.

Another extraordinary component to Schatz’s night-cap was his reflection on the other 24 wins during the season. Each victory added value to his season – alongside the 60 top-five’s and 77 top-10’s in a season with some-90 points races. Collectively, his consistent success throughout the rigor of one of the most premier national tours led to a dominant 314-point spread in the series’ points race. With the points lead, Schatz officially captured his eighth series championship; Schatz has won a championship in 40 percent of his seasons with the Outlaws.

“I know fans would have loved to see it go down to the wire,” said Schatz about his championship campaign. “It’s hard to say in this sport when you take 92 events coast-to-coast you have during the season. We left Florida to start this season 100-plus points in the hole. We had to win. We dug out of that hole –a 100-point deficit to a 300-point deposit with four DNFs along the way. To me, it was one of the hardest fought comebacks that we’ve had, and I’m really proud of my guys for that. After that, it says there’s nothing my guys can’t do.”

Like Schatz alluded to, he and his Tony Stewart Racing team encountered adversity at DIRTcar Nationals at Volusia Speedway Park. Though he captured his first win of the season on the second night of the three-day event, Schatz did not make the feature in the opener and concluded the event placing outside of the top 10. For the reigning series champion, who won 31 races in 2015, he felt the pressure early-on.

“On paper, we won a lot of races and had no DNFs,” said Schatz recollecting on 2015. “The hardest thing you can ever do is come out of a hole. We came out of that hole, and had consistent top-five and top-three finishes. But, there were also some things we left on the table. We left a championship out of Knoxville [Nationals], but this championship somewhat makes up for that.”

This year’s championship and a victory at the highly-regarded King’s Royal at Eldora (Ohio) Speedway were two redeemable up-sides to the season. To him, those moments are still “hard to put into perspective.” In the 10-month span of preparation and competition, Schatz’s successes have yet to resonate with him. Though it will take Schatz some time to absorb the total success of the year, his triumph for the finale of World Finals was felt immediately in victory lane.

Schatz, who started fifth for the 30-lap feature, used his momentum from the previous night toward his 2016 season send-off. Schatz was honored with the KSE Hard Charger award the previous night, climbing 10 spots to a third place finish. Starting nine spots better than Friday’s feature, Schatz was in a better position to contend for the win.

Platinum driver David Gravel, who won his heat race and the Craftsman® Club Dash earlier in the program, was seeking his 10th win of the season; by doing so, he would have joined Schatz as the only two drivers in the series to record double-digit win totals. Gravel led the field into the green flag. From there he alternated from the top in turns one and two to the bottom in turns three and four to maintain the top spot.

The first of four cautions on the second lap not only diminished Gravel’s buffer, but also regrouped the field. On the restart, Schatz charged forward. He picked-up his podium spot then, thereon setting his sights on quick-timer Greg Hodnett and Gravel ahead of him. Schatz eventually used lapped traffic to take over the second spot on the backstretch. More importantly, a trend was developing: Schatz used the breaks in momentum from the cautions to his advantage.

The race’s second caution on the 13th lap again regrouped the field; the top-three was beginning to separate by half-second intervals before the yellow flag waved. His strategy of using cautions came into play three laps later when it paired him with Gravel. Gravel defended his top spot on the restart and more importantly in turns one and two. However, the following lap reopened the door in Schatz’s favor. Schatz, unable to get under Gravel the first time, made a successful move the second time around before another caution on the 15th lap.

Halfway home, Gravel dipped below Schatz in an attempt to reclaim the lead. But, a strong restart from Schatz made it an ill-attempt. Gravel stayed on pace with Schatz thereafter, maintaining a sub-second distance away from him. The race’s final caution with nine laps remaining gave Gravel another opportunity to strike.

Gravel, taking the same approach, tried to leverage his racecar underneath Schatz’s in turns three and four. However, Schatz’s raw speed kept the battle at bay; he led Gravel by 0.472 seconds with eight laps to go. Within those laps, Platinum driver Joey Saldana sealed the deal for third. Saldana started seventh in the feature.

“As the run went on, the more and more [Schatz] slipped off turn four,” said Gravel, explaining his strategy. “The bottom was definitely better there later, but I just could not keep up on the restarts. He just checked-out on the restarts, and I just couldn’t close the gap.”

While Schatz and Gravel protected their spots for the rest of the feature, Hodnett sought revenge. In the closing laps, Hodnett was able to reclaim the final podium spot. Even so, seven Outlaws finished inside the top 10. Schatz ultimately won the race by a 0.788-second margin.

“Joey races really hard, but I could squeeze in under him a couple of times enough to get out front,” Hodnett said. “But I’ll tell you what, hats-off to Schatz, Gravel and those guys. All these guys are really tough, and just to be able to half-ass compete with them, I’m just really proud of it. Would have liked the turn out to be better, but we’ll be back God-willing to see what we can do in front of these great fans.”