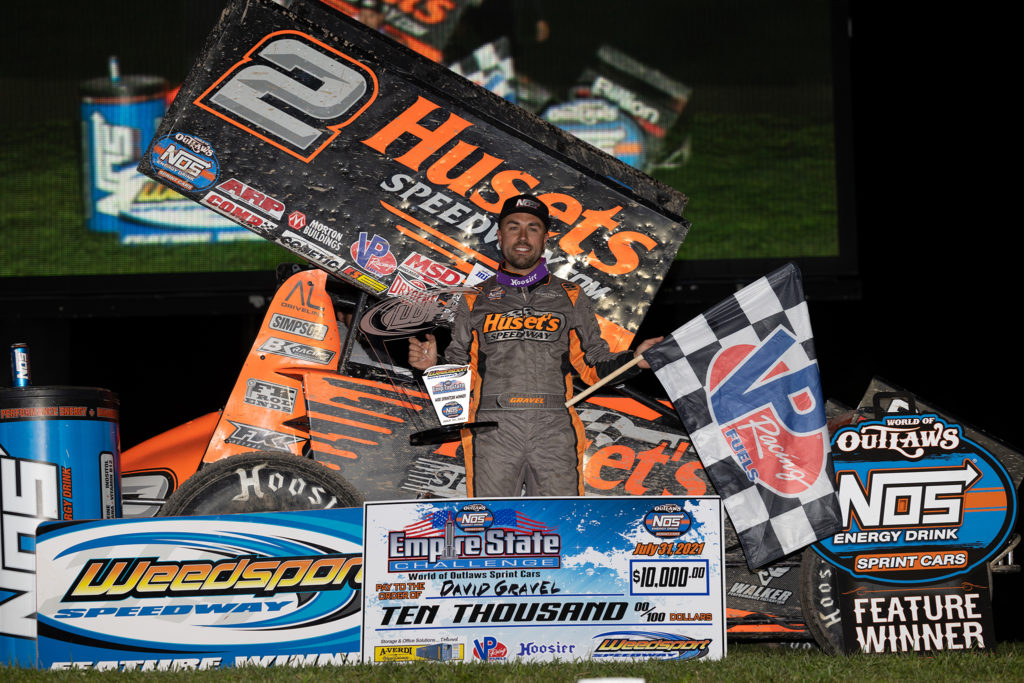 Another Victory Stripped from Dominant Haudenschild with Lap Traffic Collision

For the second straight night, New York fans were treated to late-race drama with The Greatest Show on Dirt.

Sheldon Haudenschild essentially had the win in the bag as he set a torrid pace through lap traffic, but a collision with James McFadden sent his NOS Energy Drink #17 spinning from the lead with only two laps remaining.

David Gravel inherited the race lead and took full advantage of the situation. The Watertown, CT native survived a green-white-checkered restart with Donny Schatz and Brad Sweet on his heels to win the Empire State Challenge at Weedsport Speedway.

The sudden victory was reminiscent of what happened at Attica Raceway Park in May when Haudenschild fell victim to lap traffic trouble and gifted Gravel another win. Ultimately, Saturday’s incident gave the Big Game Motorsports #2 their seventh win of the year and Gravel the 65th win of his World of Outlaws NOS Energy Drink Sprint Car Series.

Unfortunately for Sheldon, it was another case of what could have been. The Weedsport loss was the sixth occurrence this year of Haudenschild leading in the final 10 laps, but failing to appear in victory lane. The argument could easily be made that the Wooster, OH native would be the winningest driver on tour in 2021 if lady luck cooperated.

“He was running a wild pace up there and really living and dying by the top,” Gravel said on Haudenschild. “Those lappers finally moved up and took his lane away, then he just got into the back of them. I don’t think I would’ve won, but I felt like I could keep him kind of close. I was better on the bottom of turns one and two, but he was full send and bangin’ it off the wall on the other end. That’s just such a hard pace to keep.”

Before Haudenschild and Gravel swapped fortunes, Oklahoma City’s Wayne Johnson was the story of the night early on. The Two-C Racing pilot set a season-best qualifying effort (4th), won his first Drydene Heat Race of the season, made his first DIRTVision Fast Pass Dash of the season, earned a season-best starting position (5th), and ultimately tied his season-best Feature finish.

However, it was 10-time Series champion, Donny Schatz, on the pole position of the 30-lap NOS Energy Drink Feature. Looking to snap an 18-race drought since his 300th career win at Dubuque, Iowa last month, the Fargo, ND native flexed his muscle in the early stages as he built a large lead and raced into lap traffic.

The top-five of Schatz, Gravel, Haudenschild, Sweet & Macedo ran patiently through the first half, but the pace ratcheted up once the cross flags waved. On Lap 19, Haudenschild built his momentum and rocketed by Gravel to take second. He wasn’t done, though. Three laps later, he stormed right by Schatz to take command of the lead on Lap 22.

It took only a handful of circuits for Haudenschild to build a massive lead, but at a moment’s notice, it was all gone. Receiving the two-to-go signal, the #17 collided with McFadden’s #9 on entry to turn one, and suddenly the win was stripped away as Haudenschild went spinning to a stop.

The first and only stoppage of the race created a green-white-checkered finish with Gravel gifted the race lead. He lined up with Schatz and Sweet right on his tail tank, but never wavered once in the final two laps. The #2 pulled away once the green flag dropped and pulled away to win it by 1.738-seconds.

“I know it’s been over a month since we won, so this one was much needed,” Gravel admitted. “I just love winning here in New York, too. These fans in the whole northeast are awesome. Our t-shirt trailer was busy all day. I can’t thank these fans enough.”

Capitalizing on the restart, Brad Sweet snuck by Schatz to put the Kasey Kahne Racing, NAPA Auot Parts #49 in second-place.

“I’ll take it,” Sweet said. “I think we had a fourth-place car tonight, but Sheldon had his trouble and we got Donny on the bottom there. This place is tricky. I’m looking forward to these next few weeks with some more big races coming up.”

After leading the opening 21 laps, Donny Schatz slipped back to third as he earned his 15th podium of the year aboard the Tony Stewart/Curb-Agajanian Racing, Ford Performance #15.

“We just needed to better,” Schatz mentioned. “You’re not gonna be that bad at the end of the race and end up winning. I guess we lucked into a third-place tonight.”

Carson Macedo and Jason Johnson Racing extended their streak to 16 consecutive top-seven finishes with a fourth-place run at Weedsport. Rounding out the top-five on Saturday night was Logan Schuchart, who set Slick Woody’s QuickTime in the Shark Racing, Drydene Performance Products #1S.

UP NEXT: The 14th annual Ironman 55 awaits the World of Outlaws NOS Energy Drink Sprint Car Series next weekend on Friday & Saturday, August 6-7 at Federated Auto Parts Raceway at I-55. Following that, we’re off to Iowa for the 60th NOS Energy Drink Knoxville Nationals pres. by Casey’s on August 11-14.