Schuchart earned his eighth career win of the year at Eldora, doubling his win total from the start of the season
By Nick Graziano September 28, 2019 at 8:19 am |

Logan Schuchart entered Friday’s race at Eldora Speedway with an attitude. He felt like the half-mile speedway owned him.

He finished second for the third time in-a-row during the May event at the track. During the four July races there he finished third, third, fourth and second at the Kings Royal.

Schuchart craved a second win at the iconic track – his first came in 2017. He was a shark that sensed blood in the water. No one was going to keep him from his target. He and his Shark Racing team made sure of it.

Aside from Hot Laps, which were ran twice due to a two-and-a-half-hour rain delay before Qualifying, Schuchart won everything he could involving a sprint car Friday night. He set Quick Time, won his Drydene Heat race, drew the pole for the DIRTVision Fast Pass Dash, won the Dash and led all 30 laps in the World of Outlaws NOS Energy Drink Sprint Car Series Feature – earning his eighth victory of the season.

“This is definitely one, coming to Eldora, is one I always look forward to,” Schuchart said. “It’s been really good to us. We just haven’t been able to win one. So, to end our season at Eldora and win one is cool. Especially since I’ve had so many good runs and haven’t won one since 2017. It’s cool to win at this place any chance you get.” 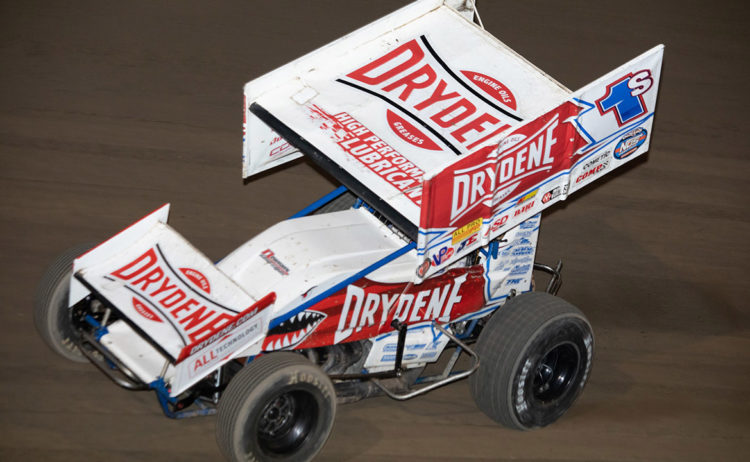 While the Hanover, Pa.-native dominated the BeFour the Crowns Showdown, a Texan made him work for it. Aaron Reutzel – coming off a podium finish with the World of Outlaws at Jacksonville Speedway and setting the quickest lap in the second round of Hot Laps – hunted Schuchart throughout the Feature, in search of his first Series win at the speedway.

Schuchart launched ahead of the field on the initial start of the Feature with second-place Carson Macedo on his tail and Reutzel making his way to third. Before any of them could build momentum, the red flag came out before the completion of the first lap for Wayne Johnson flipping in turn three.

When the race restarted, Schuchart again shot to the lead with Macedo in pursuit. However, Reutzel put an end to Macedo’s chase in the first corner. He darted to the high side in turn one and charged off turn two with the ferocity of a speeding bullet, pulling alongside Macedo down the backstretch.

Macedo, a rookie, and Reutzel, a part-time driver in the Series, raced wheel-to-wheel for a lap before Reutzel outran Macedo into turn three and stole the runner-up spot on the second lap. Schuchart was half of a straightaway ahead of Reutzel. However, that gap vanished a few seconds later.

Another red flag came out for Brady Bacon wrecking in turn four on Lap two. It was the last time the field had to slow for an accident, though.

On the final restart of the night, with 28 laps to go, Schuchart pulled ahead of Reutzel by about two car lengths into the first turn and grew his lead to more than a second shortly after. By Lap nine Schuchart found himself in heavy lap traffic. Exactly what Reutzel needed.

As the Drydene No. 1s navigated its way through a maze of cars, the Folkens Bros. No. 87 of Reutzel crept closer every lap. Near the halfway point of the Feature, Reutzel found himself feet away from Schuchart’s bumper. But before he could attempt a pass, Schuchart found clean air and pulled away from him again.

The two drivers were an accordion for the remainder of the race. Reutzel would close on Schuchart and then Schuchart would pull away.

“At one time I thought we were going to be able to pass him,” Reutzel said about racing Schuchart. “Where I was making time around the bottom, that kind of went away for me. I started searching around and found sliding myself was pretty good. I got back to him one time, we got to a lap car that was trying to unlap himself or something and I was never able to get by that lap car and just kind of sat there the rest of the race. My car started to go away a little bit at the end, so that was the end of that.”

Having raced with Reutzel before and knowing his style, Schuchart anticipated where he thought the Texan might run and made sure he didn’t leave a door open for him.

“I was trying not to get held up too much or bonsai too many lap cars,” Schuchart said. “I figured if I did do that, he’d be close. I knew he would be, most likely on the top. Aaron is very fast, but a lot of the races that he wins he’s on the top. I was running through the middle and felt like I was slowing down a little and tried to get back to the top as quick as I could to not give him a chance to zoom around the outside of me.”

Schuchart’s plan worked. He held off Reutzel – who had to hold off a fast approaching Sheldon Haudenschild in the closing laps – and won his second career World of Outlaws race at Eldora Speedway.

“To have a year like this. To win races with the World of Outlaws is very, very tough,” Schuchart said. “To win eight of them and get another one here at Eldora, it means a lot to myself. I know it means a lot to everybody else.”

Before the start of the season Schuchart had eight career wins over a five-year span. Now, he’s doubled that statistic in one season. He and his Shark Racing team definitely have an attitude this year. An attitude to win. 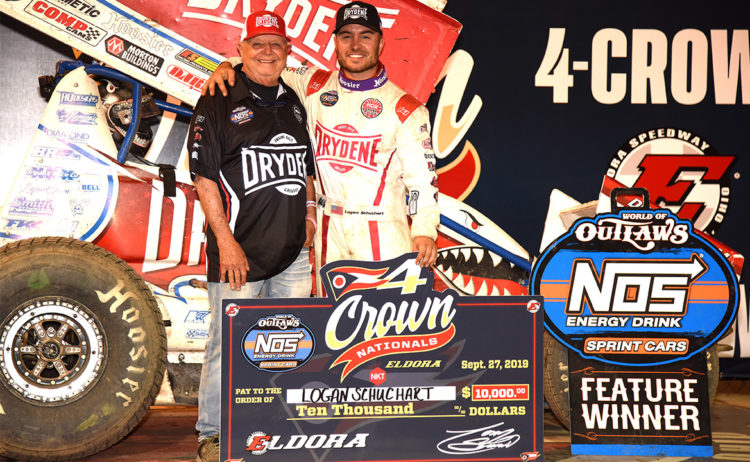 He wasn’t the only driver with a big night at Eldora. Brad Sweet earned the KSE Hard Charger award by starting 17th and finishing sixth, and he took the points lead from 10-time Series champion Donny Schatz – who finished 17th. Sweet now leads Schatz by four points.

The World of Outlaws NOS Energy Drink Sprint Car Series on Saturday, Sept. 28, will return to Lernerville Speedway in Sarver, Pa. for the Commonwealth Clash. Get tickets and more information.