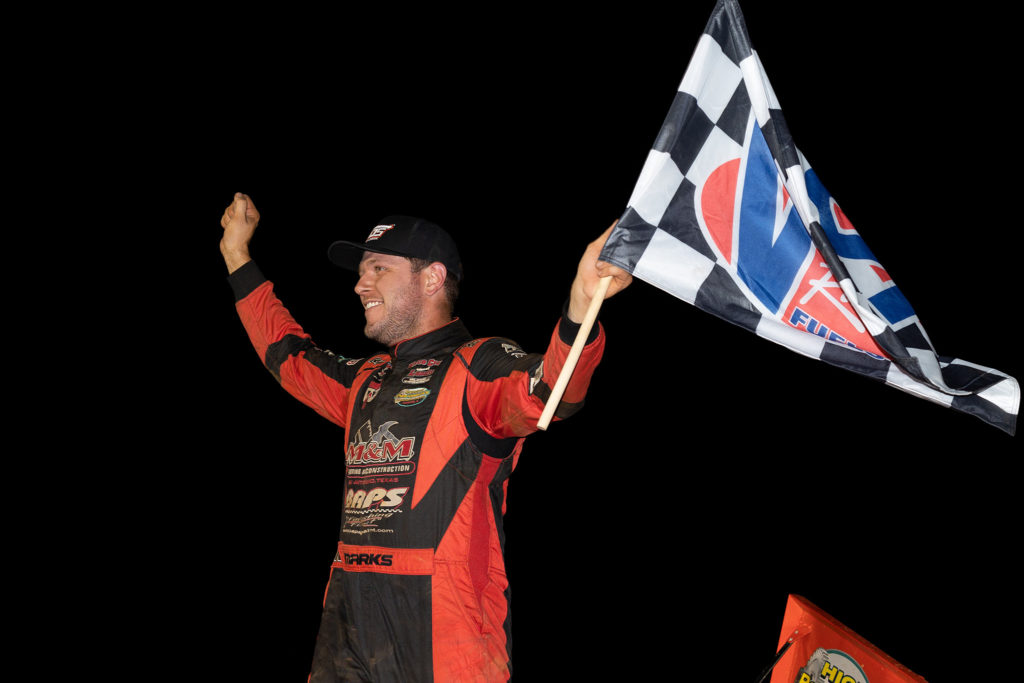 798 days later, the PA Posse have finally tasted Outlaw glory again on their own porch.

After going for 0-for-16 over that stretch, The Myerstown Missile stepped up and put an end to the streak during Saturday night’s $20,000/Win Champion Racing Oil Summer Nationals at Williams Grove Speedway.

Brent Marks‘ sixth-career World of Outlaws NOS Energy Drink Sprint Car Series victory came as one of the more exciting finishes in recent memory at the Mechanicsburg 1/2-mile. A tricky and technical surface combined with challenging lap traffic situations created an intense fight for the lead late in the going during the 30-lapper.

Donny Schatz commanded the opening 20 circuits aboard the Tony Stewart/Curb-Agajanian Racing #15, but Marks hounded him from the start. He finally put the #19 to the point on Lap 21, but quickly received a hellacious challenge from Friday’s victor, Sheldon Haudenschild in the NOS Energy Drink #17.

Marks received a trio of mega slide jobs from Haudenschild but had a counter for every move thrown his way. He separated himself in the closing laps and officially scored his 11th career Williams Grove win with a 0.903-second margin of victory.

“That was pretty intense,” Marks mentioned. “The track was tricky and the lap cars made it tough. We had a lot of close calls out there, but we survived and pulled it off. The track really threw us for a curveball, it was drier than we expected. We made the right calls, though. That was a ton of fun racing with Sheldon and Donny like that.”

Starting fourth aboard the BAPS Paints, M&M Painting & Construction #19, Marks was on the outside of an all-Posse row two with 103-time Williams Grove winner Lance Dewease to his inside with the Kreitz Racing #69K. In front of them, it was an all-Outlaws front row with Sheldon Haudenschild and Donny Schatz pacing the field.

Schatz, who has won at Williams Grove more than any other track in his World of Outlaws career, looked poised for win #22 when his Ford Performance, Carquest #15 quickly built a huge lead. However, Marks would soon enter the picture.

Traffic on Lap 5 allowed Marks to catch the 10-time champion for the lead, and he would hound him for the next 15 laps. The duo played a cat and mouse game while slicing through the backmarkers until Marks built a big enough run down the front stretch to launch a turn one slider for the lead at Schatz.

Marks led at Lap 21, but Haudenschild followed him around Schatz and threw out his own attempt at the top spot. With Marks tight and over the cushion, Haudenschild launched his own turn one slider on Lap 22 and cleared Marks for the lead, but made contact with lapper Freddie Rahmer, who rolled to a stop.

The only restart of the race with eight laps remaining established a shootout between Marks and Haudenschild. Sheldon came firing back with a move into turn one, but Brent calmly crossed him over and retained the lead. The next time by, it was the same thing. A huge slider from Sheldon, but a precise counter from Brent to whip the #19 back to the point.

Over the final five laps, Marks maintained a steady pace on the cushion and walked away with his second World of Outlaws NOS Energy Drink Sprint Car Series victory of the 2021 season. Another important notch to Brent’s belt with a hopeful full-time return to The Greatest Show on Dirt looming in 2022.

On this night, though, the Myerstown, PA native was happy to call it a much-needed win for the PA Posse.

“We broke the streak of the 4-0 Outlaws, so for tonight, I guess you can call us Posse,” Marks joked.

“We had to fight for that one,” Haudenschild noted. “Nothing to hang our heads up, Brent ran a great race. He was able to enter turn one so fast that forced me to run it too hard into the bottom and he was able to square me up every time to pass me back.”

After leading the opening 20 laps, Fargo, ND native Donny Schatz slipped back to complete the podium in third place.

“We just needed to be better,” Schatz said. “I was struggling more and more with every lap. I think we were fortunate to hang on to third.

Carson Macedo and Lance Dewease, who ran 1-2 in a fight for the win at Williams Grove in May, finished fourth and fifth this time at the 1/2-mile.

Closing out the top-10 at the Summer Nationals was the #39M of Anthony Macri, the #9 of James McFadden, the #2 of David Gravel, the #83 of Aaron Reutzel, and the #5W of Lucas Wolfe.

UP NEXT: The World of Outlaws NOS Energy Drink Sprint Car Series will return to the state of New York for the first time in three years next weekend. The doubleheader takes The Greatest Show on Dirt to Ransomville Speedway on Friday, July 30, then to Weedsport Speedway on Saturday, July 31.