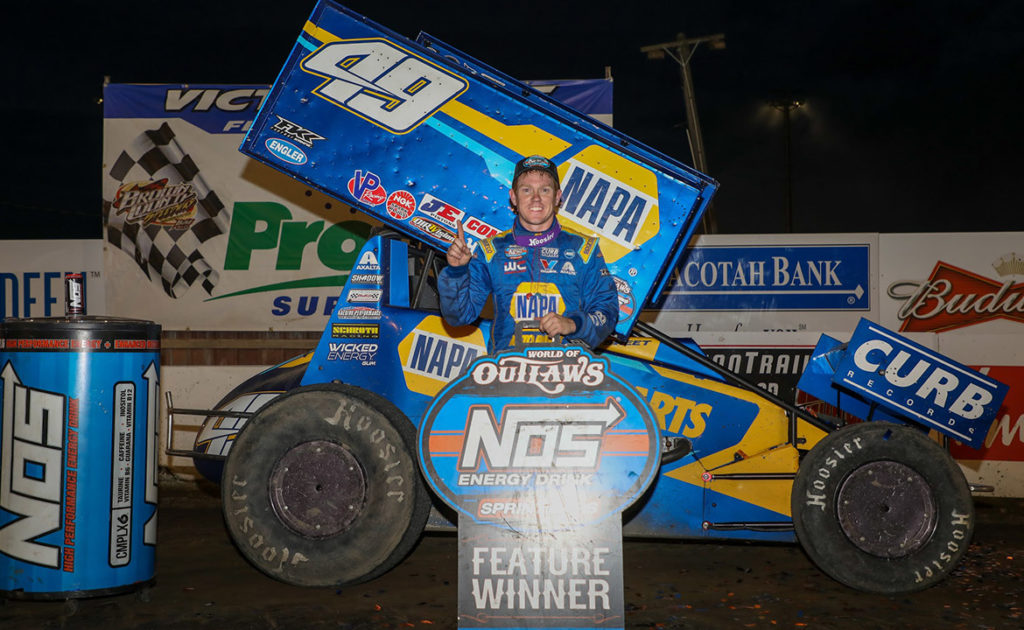 That’s because he used it to his advantage to win six of the last eight races – including Wednesday night’s World of Outlaws NOS Energy Drink Sprint Car Series Feature at Brown County Speedway in Aberdeen, S.D.

However, with a fifth-place starting position and several cautions, it took Sweet about half the race to make his way to second and catch leader Logan Schuchart.

His trek to the front it took patience. And a few key adjustments by his Kasey Kahne Racing crew before the 35-lap Feature.

“We were awful in the Dash and the NAPA Auto Parts guys made a great adjustment for the [Feature] and we had a really good car,” Sweet said.

Sweet started the night as the quickest car in Hot Laps and won his Drydene Heat race. The Dash was a drastic change of pace for the Kasey Kahne Racing No. 49 team, though. Sweet finished fifth out of six cars – falling from a third-place starting position.

Then the adjustments, and patience.

Schuchart jumped to the lead at the start of the Feature, but had pressure from Kraig Kinser for the position. Their runs were cut short with a caution on the first lap for Paige Polyak spinning in turn one. Before they could battle for the lead again, there was another caution. This time for Jac Haudenschild going off track – an issue several drivers had throughout the night.

When the race went green, Kinser fell victim to 10-time Series champion Donny Schatz and Sweet, who passed Kinser for second and third, respectively. The trio of Schuchart, Schatz and Sweet remained in that running order until Lap 15.

With 20 laps to go, Sweet dove to the bottom of turn three, while Schatz ran high – the line just about every car was on – and slid up in front of the Fargo, N.D.-native to take second-place. He was now in a position to learn. To stalk. To hunt.

Lap traffic was a benefit to Sweet in previous races, helping him catch the leader. However, with multiple cautions for cars either spinning or going off track, Schuchart had little traffic to deal for the majority of the Feature. He never fumbled on the restarts, either. The rear tires of the Drydene No. 1s held on to clay surface with the grip of a shark biting into its prey, launching Schuchart to a multi-car length lead every time.

On the final restart with 19 laps to go, the race went green flag to checkered flag. Schuchart again launched to the lead and cruised around the high side of the track, while Sweet and Schatz followed in his footsteps.

With about 10 laps to go, Schuchart found himself having to navigate through heavy lap traffic. That brought Sweet and Schatz back into the battle for the lead. Sweet’s patient was paying off.

Four laps later, Schuchart slid off the bottom of the track while trying to pass a slower car. His loss of momentum allowed Sweet to dart to the inside of the Shark Racing car. The duo drag raced down the front stretch of the quarter-mile track, neither willing to succumb to the other.

On their charge into turn one, Sweet used the middle lane to his advantage, powering by Schuchart for the lead and running away with it for the remaining five laps.

“I think he (Schuchart) thought he could get that lap car and it just allowed me to get the run,” Sweet said.

Sweet went on to see the duel checkered flags waving over his car for the eighth time his year – and the 42nd time in his World of Outlaws career.

“I was just trying to be patient there,” Sweet said. “Sometimes it’s good to be second again. Logan wasn’t sure what to do with the lap car. I knew there was no way to pass him. The rubber was starting to move down the race track and it was tricky to hit.”

Schuchart, who led 30 laps, puts the blame on himself for letting the win slip away.

“I just got a little over anxious,” Schuchart said. “It was a bad deal on my part. I thought I had to pass a lap car and I didn’t. But I’m happy to be up here running second.”

While Schuchart was still satisfied with his podium finish, Schatz, who ended up third – his second podium finish in-a-row – was left still looking for more.

“We’re close, but close only counts in horseshoes and hand grenades, and we’re not doing either of those, so we’ll keep digging and trying to get the wins,” Schatz said.

At this point last year, Schatz had double digit wins and the points lead. Currently, the Fargo, N.D.-native has three wins and sits second in points – now 78 points behind the KKR No. 49 car. Sweet is on an impressive run of 13 top-five finishes in-a-row and is already nearing his 2018 win total of nine victories.

“I’ve had years when we only win five races in a whole season,” Sweet said. “I know how special it is when you get on a roll like this… This is what we’re meant to be doing out here. It’s fun to win these races. I’m not going to take it for granted and we’re going to keep working hard.”

The World of Outlaws on Friday, July 5, and Saturday, July 6, will be a Cedar Lake Speedway in New Richmond, Wis. for the FVP Platinum Battery Showdown.