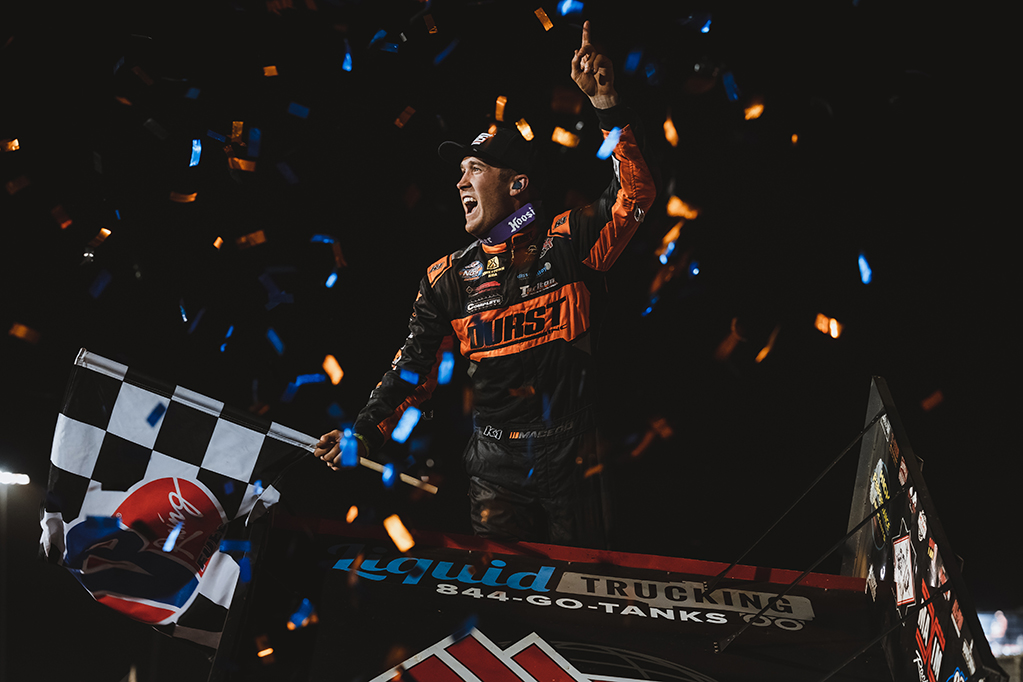 It came down to the last corner, but once again the World of Outlaws defeated the PA Posse.

This time, though, it was a first-time Central Pennsylvania Outlaw winner with Carson Macedo breaking through to deny local legend Lance Dewease of his 100th career Williams Grove Speedway victory.

The Lemoore, CA native commanded all 25 laps of Friday’s Morgan Cup opener, but it wasn’t without heavy challenges from the Fayetteville, PA superstar.

Dewease, driving the iconic #69K owned by Don Kreitz Jr., stalked Macedo’s Jason Johnson Racing #41 all throughout the NOS Energy Drink Feature. They raced through lap traffic and Dewease closed the gap enough to try a slider for the win in the last corner, but it fell just short as Macedo planted the throttle and whipped around him.

Winning by 0.361-seconds, Macedo clinched his third victory of the 2021 season and his ninth-career win with the World of Outlaws NOS Energy Drink Sprint Car Series.

“This feels amazing,” Macedo blurted out standing in Williams Grove victory lane. “I just won my first World of Outlaws race at the Grove; something I never thought I would do. To have Lance run second, you know he’s one of the best ever here, and probably all-time. What a night.”

Macedo’s path to victory lane could easily be credited to his phenomenal starts all night long at the Mechanicsburg, PA 1/2-mile.

He aced the outside of turns one and two time and time again, beating Brad Sweet then Sheldon Haudenschild in his Drydene Heat Race to claim a redraw position. From there, he drew second and beat Lance Dewease on the outside once again in the DIRTVision Fast Pass Dash.

Starting from pole position, Macedo won the battle into turn one and never relinquished the lead from there.

Dewease, who started outside pole and ran second for the entirety of the race, came close in the latter stages with the aid of lap traffic, but just couldn’t get past the #41. Macedo’s victory denied Dewease of his 100th career Williams Grove win.

“It’s all about clean air right now with this track,” Dewease noted afterwards. “I tried real hard to make ground, especially through turns one and two if I could hit the strip in the middle just right, but it was tough to do consistently. I’d catch him in traffic, but he’d get a lapper and that would mess me up. I clipped the front end on the berm coming to the checkered and it killed my shot to get in front of him.”

Finishing in the final podium position was Brent Marks of Myerstown, PA. It’s his third podium appearance in the last four events since bringing his own #19M operation back to the World of Outlaws races.

“Those guys were just too good tonight,” Marks mentioned. “It would’ve been nice to get bottled up near the end with a restart, but we just didn’t get it. We probably needed to go further with the setup. I thought it would curb up in turns one and two, but it went away and that hurt us.”

Closing out the top-five on Friday night was former Williams Grove winners James McFadden in fourth aboard the Kasey Kahne Racing #9 and Aaron Reutzel in fifth aboard his Roth Motorsports #83.

UP NEXT – The World of Outlaws NOS Energy Drink Sprint Car Series will wrap up the Pennsylvania swing against the Posse tomorrow on Saturday, May 15 with the Morgan Cup finale at Williams Grove Speedway.