Brad Sweet saw the collapse of a fruitful performance in less than a second during Wednesday night’s World of Outlaws NOS Energy Drink Sprint Car Series Feature at Willamette Speedway.

With lap cars slowing the Grass Valley, Calif.-native’s progress, David Gravel threw a slide job underneath them all into turn one and exited the corner with the lead. After leading 25 of the 30 laps, Sweet was forced to watch defeat drive away from him.

He wasn’t willing to settle for second, though. Not now. Not this late in the season.

The next time into turn one Sweet wasn’t forgiving with the throttle. Or his car. He dove to the bottom of the corner and slid the NAPA Auto Parts No. 49 car up across the track, directly in front of Gravel, nearly making contact with the Jason Johnson Racing No. 41 car.

But it was the winning move. Sweet led to the end, picking up his first Willamette Speedway victory and 13th World of Outlaws win of the year – 47th career victory overall. 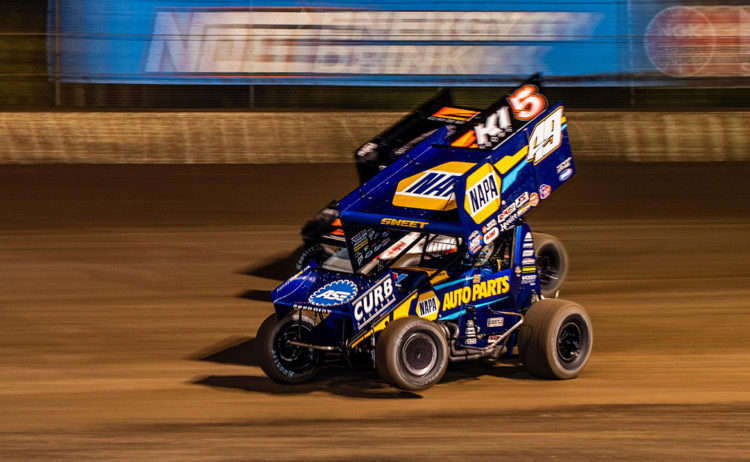 “I’m just glad I led the last one,” Sweet said. “I about gave it away in lap traffic. It’s nice to get this NAPA Auto Parts car back in Victory Lane. We’ve had a great season. When you have a great season and you go on a little winless streak it kind of feels like the world is ending.”

The winless streak was eight races – about a month’s time. Many drivers are on longer winless droughts, but in those eight races Sweet lost the points lead to 10-time Series champion Donny Schatz and struggled to find the podium at times – an uncommon characteristic for he and his Kasey Kahne Racing team.

The pairing looked back in traditional form at the Oregon track. Sweet started the night by setting Quick Time – five hundredths of a second off the track record he set in 2016. He then finished second in his Drydene Heat race and won the DIRTVision Fast Pass Dash.

Sweet jolted to the lead at the start of the 30-lap Feature, but Gravel never let the “Big Cat” out of his sight. The Watertown, Conn.-native stayed within a second to half of a second gap behind Sweet throughout the race.

Lap traffic came into play on Lap seven, but every time a slower car would obstruct Sweet’s run around the high side of the track – allowing Gravel to close on him – Gravel would also face the same issue once having to deal with the lap car himself.

However, with five laps to go, Sweet found himself stuck behind the slower cars of Brent Marks and Jessie Attard going into turn one. The two cars blocked the top lane, forcing Sweet to hammer the brakes and kill his momentum into the turn. That allowed Gravel to dive into the turn and exit off the bottom with the lead.

“I miss judged how slow that fifty-three (car) was going,” Sweet said. “Brent got kind of tangled up with him and I basically had to stop. I was stopped up by the cushion and I knew I was in a bad spot. It wasn’t surprising to see David go by there.”

With the hunger and determination to win again, Sweet said Gravel left the door open the next time around and he threw the power slider at him to take back the lead. Gravel tried to throw another slide job at Sweet with three laps to go but couldn’t slide up in front of the No. 49 car in time. Sweet went on to claim the victory.

Looking back on the race, Gravel has an idea of what he could have done differently.

“Maybe just throw a bomb on him like he gave me back there,” Gravel said. “It’s just one of those things that you’ve got to put moves on guys to win these races. I was just a little nice. He put a big boy move on me and I should’ve done the same back.”

While Gravel and Sweet dueled for the lead, Ian Madsen found his way back to a podium finish – finishing third – and picked up the KSE Hard Charger award by racing from his sixth-place starting position.

“It’s been quite frustrating as of late because we’ve had a lot of car speed, just not luck on our side,” Madsen said. “Just to get on the podium is awesome, especially starting a couple of rows back like we did.”

Schatz finished fourth, allowing Sweet to gain eight points on the reigning champion and continue to keep the battle for the championship tight – now 28 points separating them with 21 races to go this season.

The win couldn’t have come at a better time for Sweet, too, with the Series spending the next five races in his home state of California.

“It’s a good win for us,” Sweet said. “We needed a little confidence booster. These races aren’t easy to win. Even though sometimes they’re easier than others. Tonight was no easy task, even though we started on the pole. The track wasn’t super conducive to passing. But it all comes down to lap traffic and I think years of experience has helped me figure out how to finish these things off.” 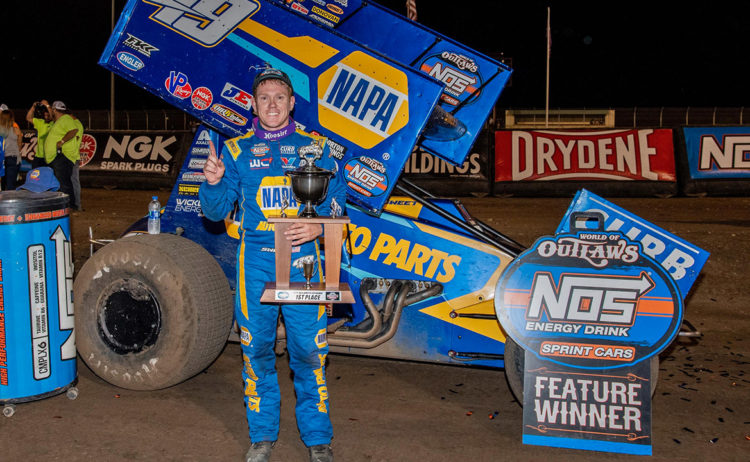 The World of Outlaws NOS Energy Drink Sprint Car Series on Friday, Sept. 6, and Saturday, Sept. 7, will be at Silver Dollar Speedway in Chico, Calif. for the Gold Cup Race of Champions. Get tickets and more information.