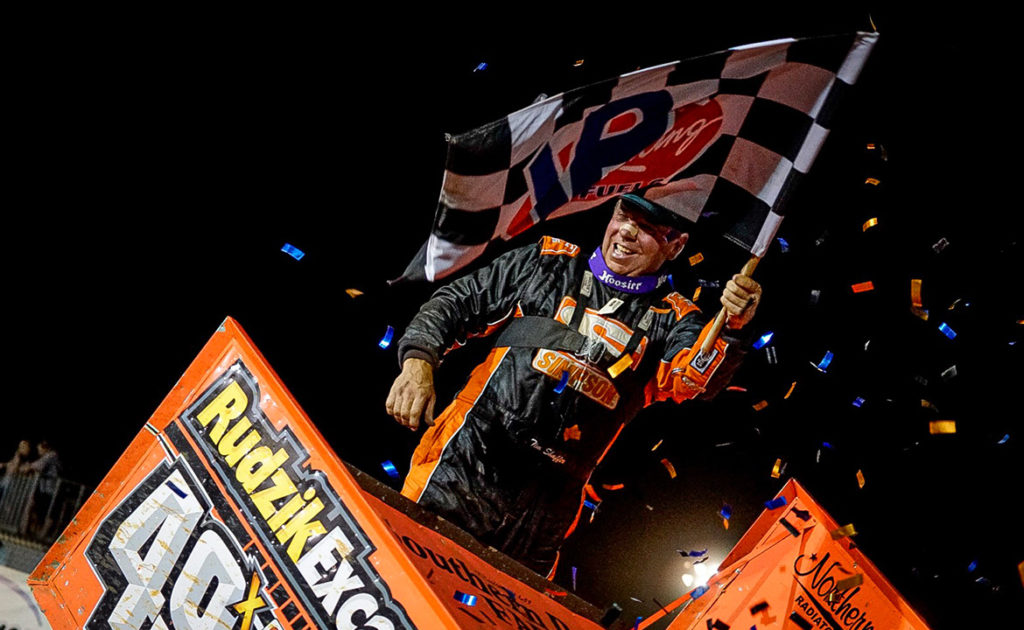 Crew members from the Roth Motorsports team jumped into Tim Shaffer’s trailer and scurried to the sweat drenched driver.

With his arms out and a smile just as wide, Shaffer embraced the two crew members and thanked them for helping him get back on track.

The Aliquippa, Pa.-native had just left Victory Lane at Williams Grove Speedway for the second time in his World of Outlaws NOS Energy Drink Sprint Car Series career – first time since 2001. The win was also his second Series victory of the year – the first was at Las Vegas in February.

“They’re hard to get,” Shaffer said about winning in general. “This place is really special. I hadn’t realized how long it had been since I won here. It goes back to a great car, great engine, great team. It’s funny, we struggled this year. We started good, struggled mid-season and it seems like we’re coming back to life.”

What the Roth Motorsports crew did to help Shaffer had nothing to do with car set up, the engine or tires. They simply helped him have fun again.

“Basically, they’ve been hanging out at my house and having fun,” Shaffer said. “Running go-karts and just having fun again. It’s neat to have friends like that. They enjoy racing and love it as much as you do and get to have fun with other things instead of being around racing all of the time, and we had a blast.

“You kind of loosen up. We came here already in a good mood, having fun, and it’s carrying on.”

That showed in Shaffer’s performance throughout the night. He finished second to Brad Sweet in his Drydene Heat race but tested Sweet for the lead in the early stage of the eight-lap race. Shaffer then went on the win the DIRTVision Fast Pass Dash from the pole and the Feature, leading all 25 laps.

However, Watertown, Conn.-native David Gravel – who was coming off a win at Lernerville Speedway and eight top-five finishes in a row, with seven of them being podium finishes – did not let Shaffer cruise to the victory.

In the early stage of the Feature, Shaffer powered around the high side of the track with a blistering pace that left about a straightaway distance between he and second-place Freddie Rahmer. His pace also put him in lap traffic by Lap five on the half-mile speedway.

Rahmer held on to second-place for the first 11 laps before 10-time Series champion Donny Schatz dove underneath the PA Posse member in turn three and powered by him off turn four. The next corner, Gravel charged around the outside of Rahmer and stole third-place.

Gravel worked on Schatz’s bumper for the next few laps until the caution came out for Daryn Pittman having a flat right front tire.

The group of 25 cars lined back up two-by-two for the restart. Shaffer crept the field around turns three and four before mashing the throttle and launching back to the lead down the front stretch. Behind him Schatz and Gravel raced side-by-side through turns one and two – Gravel low, Schatz high. The high side had been the fastest way around all night, but Gravel made the bottom work and darted to second off the corner.

The track widened as the race progressed. Shaffer stayed high, testing the limits of the cushion. Gravel, however, was perfecting the bottom line. The Jason Johnson Racing No. 41 car worked its way to within striking distance of Shaffer and waited for an opportunity to pounce.

There were no mistakes, though. Shaffer was smooth around the top and aggressive with laps cars. If there was an opening, he threw his Rudzik Excavating No. 49x into the gap without hesitation. There was no time to be cautious. Gravel was coming, and he knew it.

“I seen the board that the 41 got by [Schatz] on that yellow,” Shaffer said. “I said ‘Oh, he’s hunting me down.’ I was just trying to make good laps and I knew we’d be hard to beat.”

With Shaffer not making any mistakes, Gravel knew he had to do something drastic if he wanted another Williams Grove victory.

Coming to the white flag, Gravel rocketed his car underneath Shaffer into turn three – closing about a four-car length gap. The momentum slid his car up the track and he went side-by-side with Shaffer, about a foot a part, through turn four. Shaffer held his line – and his eyes closed, he said jokingly. That hindered Gravel’s charge and forced him to fall in line behind the orange and black No. 49x.

“I was close, I didn’t see him there for a second,” Gravel said. “I obviously just gave him a little bit of room to get back by me. If it was twenty or fifty grand (to win) I probably would have slid up here. But it was a good night. We were fast all night long. I feel like we were the only car to run on the bottom of the race track.”

Shaffer pulled away with the lead and the $8,000 win at the opening night of the Champion Racing Oil Summer Nationals doubleheader – his 27th career Series victory.

With Schatz – second in points – finishing third and Series points leader Brad Sweet finishing seventh, Gravel bested the top two in points for the second straight night and continues to inch his way into the championship battle. He is now 102 points behind Sweet and 88 points behind Schatz.

The reigning champion has also closed the gap to Sweet, now 14 points behind him.

Shaffer isn’t running for points. He’s racing to have fun. He’ll have even more fun if he can get back-to-back wins at Williams Grove Speedway and collect Saturday’s $20,000 winnings. But for now, with the support of fellow racers and friends, he’s just relishing in what he does.

The World of Outlaws NOS Energy Drink Sprint Car Series on Saturday, July 27, will return to Williams Grove Speedway for the final night of the Champion Racing Oil Summer Nationals. Get tickets and more information.