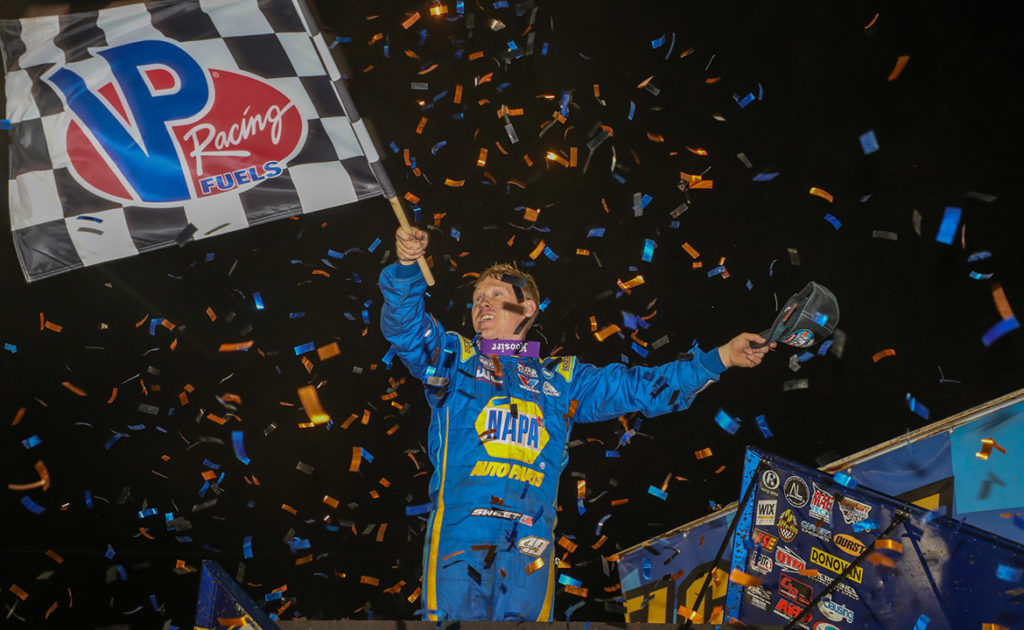 When the checkered flags waved over a victorious Brad Sweet at Knoxville Raceway Saturday night the time was close to 1 a.m. Central Time, due to Mother Nature’s evening splash of rain.

Exhaustion had no presence on Sweet’s face, though. Sweat and a big grin, yes. Maybe even a hint of relief. But no fatigue. For the Grass Valley, Calif.-native, his fourth win of the World of Outlaws NOS Energy Drink Sprint Car Series season was just another day in the office.

“We live a recluse life out here on the Outlaw tour where you pretty much train yourself to not get out of bed before 10 or 11 (in the morning) because all the work has to be done at night time,” Sweet said. “This is pretty normal for us. Once you get in the seat of the race car, it’s just like any other night.”

While he cruised to the victory in the closing laps of the 25-lap Feature with no pressure from behind, the laps prior forced Sweet to earn the win.

In a rare start at Knoxville Raceway, polesitter Lance Dewease out dueled Sweet for the lead at the start of the Feature and pulled away by three car lengths. The Fayetteville, Pa.-native led the first 13 laps of the Feature – a drastic turn of events after Dewease failed to transfer to Friday night’s Knoxville Feature.

“We made a lot of changes,” said Dewease, who finished sixth. “I really screwed up in time trials (Friday night) and didn’t run the right laps and corners. I knew tonight we were going to make that up, as far as me, personally. And they got the car a lot better from the drop of the green.”

As laps clicked off during the Feature Dewease said he got too loose, and Sweet passed him for the lead with 12 laps to go.

Sweet only led the next two laps, before Logan Schuchart, who also got by Dewease, caught the NAPA Auto Parts No. 49 car.

Continuing to run the bottom of the track, Sweet bounced off the inside berm in turn one, slowing his momentum and allowing the Drydene No. 1s of Schuchart to charge by him on the outside. Sweet wasn’t ready to let Schuchart drive away, though.

The two drivers traded lanes going into turn three; Sweet high, and Schuchart low. Sweet stayed within a car length of Schuchart exiting turn four and threw his car underneath him going back into turn one. His attack didn’t work. Schuchart powered off turn two, maintaining the lead.

Sweet, still resilient, kept Schuchart in sight. In their return to turn three, Schuchart went high and Sweet back low. This time around, the advantage went to Sweet. He found enough grip to get side-by-side with Schuchart down the front stretch and dart by him for the lead in turn one.

Schuchart made one final attempt to pass Sweet exiting turn two, looking to his inside, but Sweet shut the door going into turn three. Schuchart was then left to fend off Daryn Pittman for second-place.

“He made me work for it,” Sweet said about Schuchart. “About all I had there to beat him.”

Once Sweet reclaimed the lead, he maintained it for the final seven laps, riding the bottom of the track – the key to his victory.

“When the track’s fast like that it’s tricky,” said a nearly out of breath Sweet. “Everything happening way faster than you want it to. And you still have to try to hit that narrow bottom. That was the key tonight.

“I figured a few things out in the [Feature] and got the bottom to work. I still missed it about 50 percent of the time, So, we still got to get a little bit better. But I think we were better than most tonight.”

Sweet’s fourth victory of the season now ties him with Schuchart for the most wins this year. The win also helped Sweet extend his points lead over second-place Donny Schatz. The 10-time Series champion finished 15th, creating a 40-point deficit between he and Sweet.

While Schuchart missed out on his fifth win of the season, he still sees his performance as a positive to build off of.

“This [Brad Sweet team] won the Knoxville Nationals last year and we ran them down and passed them,” Schuchart said. “That’s something to be proud of.”

Pittman ended up third, after starting 10th. It was his second podium finish in-a-row at Knoxville – a track he didn’t feel like he was good at.

“Maybe I don’t suck here after all,” said Pittman with a smirk. “My car was really good. It was good last night. We really thought about some things that we needed to be better from last night.”

Sweet’s Knoxville victory is his 38th career Series victory and his eighth top-five finish in-a-row. With tricky track conditions and late nights yet to create any fatigue for Sweet and his Kasey Kahne Racing team, they’re poised to build upon their recent momentum.

“We’ve been on a stretch of good runs, just want to keep it going,” Sweet said.