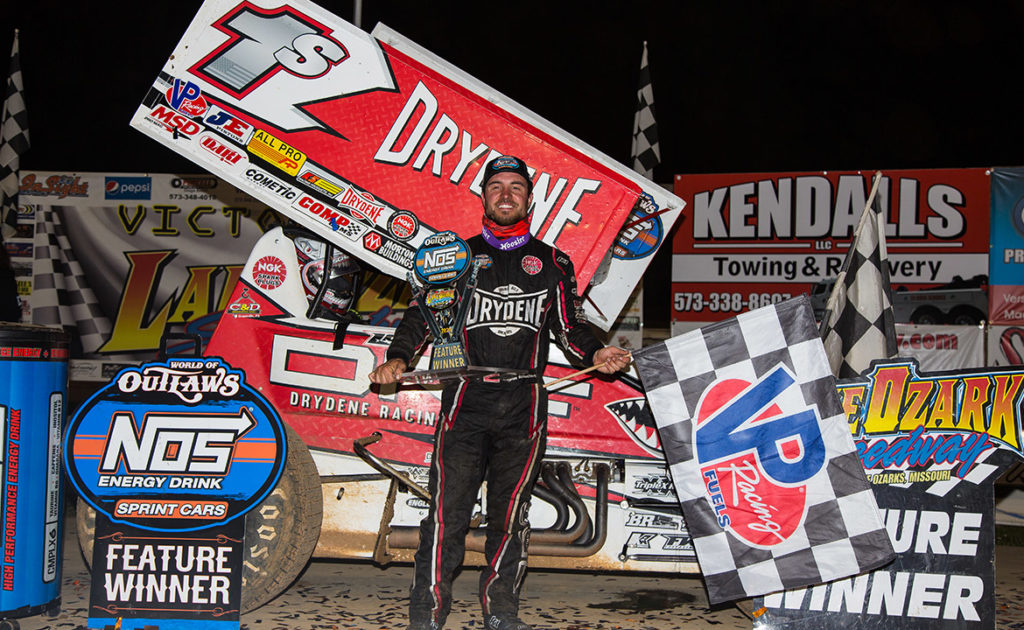 Logan Schuchart won his second race of the 2020 World of Outlaws NOS Energy Drink Sprint Car Series season in the same fashion he won his first – having never won at the track before, nor led a lap there.

On Friday night, that track was Lake Ozark Speedway. The Hanover, PA driver and his Shark Racing Team dominated the night, leading all 30 laps en route to his 18th career Series win – tying Brad Doty for 28th on the all-time wins list. In February, he pulled off a similar feat to win at Volusia Speedway Park.

“I think it’s just learning and learning,” Schuchart said about his strong start to the season. “You see teams do well early and then struggle in the summertime or toward the end of the year. I feel like we’re clicking right now, and everyone is working on the same page. We’re going back to some of these racetracks that we’ve had some bad runs at in the past, but we’re qualifying well and running good in the Heat races. We’re just putting the whole night together.”

He’s still yet to finish outside the top-five this season and is now the second driver to have multiple wins – the other being reigning champion Brad Sweet. And with Sweet having to use a rare provisional to start the Feature – finishing eighth – Schuchart now holds an 18-point lead over the Kasey Kahne Racing driver – his biggest margin since taking the top spot for the first time in his career after Knoxville.

The night looked like it might go to his Shark Racing teammate and uncle Jacob Allen, though. He powered past Sheldon Haudenschild to win his Drydene Heat Race and then outdueled Schuchart for the lead in the DIRTVision Fast Pass Dash.

The two occupied the front row for the Feature – a family battle the limited crowd in the stands and thousands watching on DIRTVision were eager to see.

Schuchart edged ahead of Allen on the initial start, but Allen fought to stay next to him as hard as he could without running into his fellow Drydene car. With the advantage of the momentum he could carry off the corner running the top line, Schuchart cleared Allen for the lead at the conclusion of the first lap.

Allen – whose best finish at Lake Ozark is 11th – was putting on one of his best performances at the 1/3-mile track, keeping pace with Schuchart in early laps of the race. On a restart with five laps completed, Allen got the jump on Schuchart and pulled ahead to the lead. However, when he ventured into Turn 1, he hit a rut, bicycled and flipped. He was OK, but his night was over, finishing 25th.

He took to Twitter after the race and said, “I want to win more than anything, I don’t get down on myself about if the cards don’t play out right. I always am trying to get better after every race to see what I can do to be more ready for the next time! I feel proud to be able to compete for wins with the Outlaws.”

With Schuchart still holding the lead, Haudenschild was the next contender to try and dethrone the king shark. But Schuchart was too strong. He pulled away to a half a straightaway lead over the NOS Energy Drink #17 car.

Lap traffic came into play at the halfway point of the race, hindering Schuchart’s speed. Haudenschild then saw the Drydene #1S back up to him every lap. The half-a-straightaway gap dwindled to about a car length. Haudenschild could smell redemption after flipping while leading last week at Federated Auto Parts Raceway at I-55.

Schuchart showed poise and patience with the slower cars, though. He never forced the issue on a pass. He went where they weren’t and methodically worked his way by.

Then, with eight laps to go, Haudenschild got crossed up in Turn 2, nearly spinning. He made the save and held onto second, but Schuchart was gone – about a full straightaway ahead.

With no pressure from behind, Schuchart cruised to his first win at Lake Ozark Speedway.

“I didn’t feel very good at certain times, but we just worked our way through traffic,” Schuchart said. “I figured Sheldon would be up top, bouncing against something but there wasn’t a whole lot up there. You kind of just had to hit the holes and the ruts the right way and get yourself through them.”

While he didn’t pick up the win, Haudenschild’s second-place run was a boost for he and his Stenhouse Jr.-Marshall Racing team.

“My guys have been working really hard,” Haudenschild said about his Ricky Stenhouse Jr. owned team. “We had a rough week last week, so to get on the podium this week feels good for them.”

Ten-time Series champion Donny Schatz and his Tony Stewart/Curb-Agajanian Racing team also had a solid recovery from last weekend – where he also had to use a rare provisional to start the Feature – by finishing third.

“We just need to get qualified better, so we don’t have to pass so many cars,” Schatz joked after the race. “These (TSR) guys are solid. It’s a challenge trying to get a good balance with all of this horsepower. Ford does a good job. Sometimes too good of a job. We’re working on that, trying to get caught up and tonight was a big step in that.”

Sweet found himself barrel rolling in Turn 3 after contact from Anthony Macri in his Heat Race, which put him in the back of the Last Chance Showdown. He was unable to make his way into a transfer position in time and used a provisional to start at the rear of the Feature. He charged from 25th to eighth, earning the KSE Hard Charger award for the night. His teammate and car owner Kasey Kahne set Quick Time at the beginning of the night and finished 12th in the Feature, two spots behind last Saturday’s winner, Kyle Larson, who was 10th.

Schuchart will have a chance to sweep the weekend on Sat., May 30 for the final night of the doubleheader event at Lake Ozark Speedway with $10,000-to-win on the line. Tickets for the event are sold out, but you can watch all of the action live on DIRTVision.