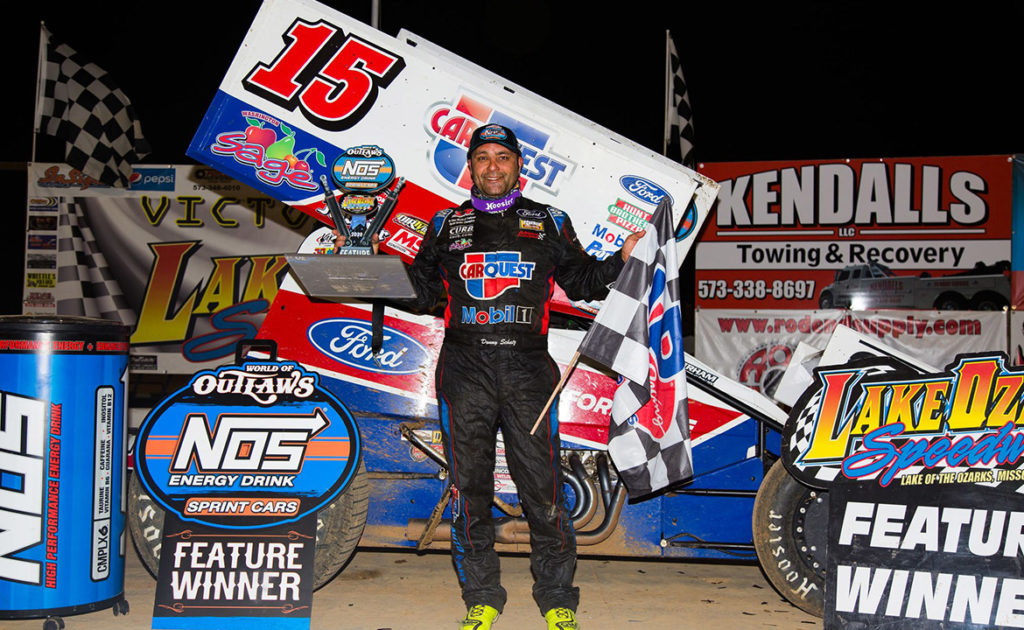 After more than 1,700 starts with the World of Outlaws NOS Energy Drink Sprint Car Series and 10 championships, Donny Schatz is still learning.

Every race provides a new hurdle to leap and a new challenge to conquer. Saturday night at Lake Ozark Speedway, that challenge was Kyle Larson.

The two titans of Sprint Car racing waged a war of slide jobs and chance in their quest to claim the $10,000 top prize on the final night of the doubleheader event. Schatz had to throw everything his Tony Stewart/Curb-Agajanian Racing #15 car could handle to deny Larson his second World of Outlaws win in a week.

After 35 laps of fierce competition between Schatz and Larson and swapping the lead multiple times at the halfway point, Schatz learned there was only one final option to claim victory with a lap to go. 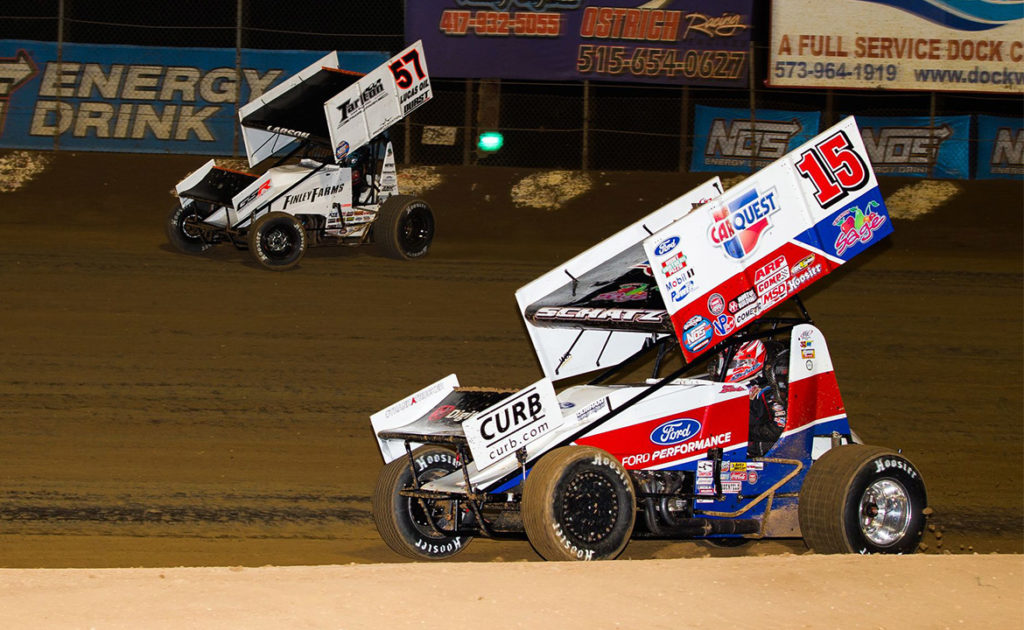 “I decided I was just going to send it,” Schatz said about his winning move. “He would have done the same thing. I got a run on him there in (turns) one and two. We went into (turn) three and I just went. … I was stuck pretty decent. Happy to get the win. It’s about time here. Feels like it’s been forever.”

After sliding by Larson for the lead off Turn 4 with the white flag in the air, the Fargo, ND driver claimed his second win of the season and became the first driver to win multiple World of Outlaws races at the 1/3-mile track.

“I’ve been out here 24 years,” Schatz said. “Every night is a learning experience still. You just have to take what you learned day in, and day out and just make a decision. At this point it is just instinct. The hard part is getting these cars right, the way you want them to stick with the tires and all of that. My guys, incredible what they’ve done all weekend.”

Larson appeared to have everything in place throughout the night to win at Lake Ozark in just his second Series start at the track. He went out first for qualifying. Set Quick Time. Won his Drydene Heat Race. Won the DIRTVision Fast Pass Dash. And then gapped the field by close to a full straightaway at the start of the 35-lap Feature.

Schatz was a quiet threat all night, making his way into the Dash and earning a fourth-place starting spot for the Feature. He made quick work of Shane Stewart and Kraig Kinser in front of him to move into second by Lap 4. Larson was out of sight. But when he hit lap traffic a few laps later, he was invincible no more.

Committed to the bottom, Schatz hacked away at Larson’s lead and darted underneath him on the exit of Turn 2 by the halfway point. He led the next four laps before getting held up by a lap car and allowing Larson to steal the lead back.

While still focused on making another attack at Larson for the lead, Schatz now had to also worry about holding off reigning champion Brad Sweet behind him. In doing so, Larson began to distance himself from Schatz.

The win was in Larson’s hands. While holding Sweet behind with one hand, Schatz tried to reach for Larson with the other, looking underneath the #57 car each corner, but was never close enough to put fear in Larson’s hopes.

However, a late caution, creating a green-white-checkered finish, gave Schatz one last attempt to try something. Anything from what he’d learned. With a run off Turn 2 that kept him in tow with Larson down the backstretch, Schatz “sent it.” He dove underneath Larson going into Turn 3 and cleared him off Turn 4 to drive away with the victory, leaving the two California drivers behind him to round out the podium. 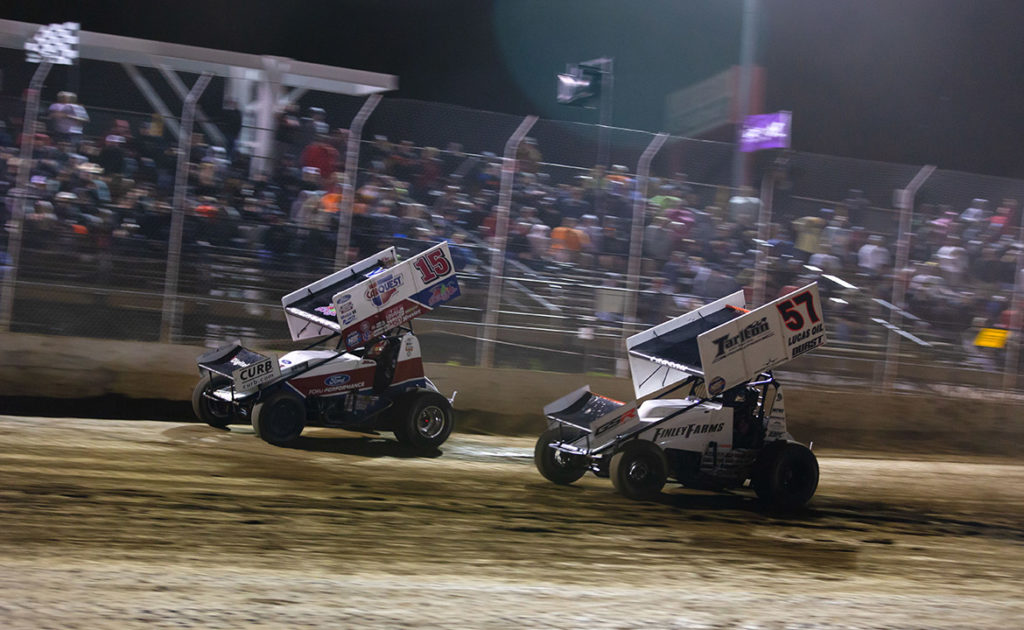 “Obviously, it would have been nice to get the win,” Larson said with a heavy breath after his runner-up performance. “I figured Donny would have ripped the middle. On the restarts before he would almost clear me anyway here in (turns) three and four. So, I should have just known to protect and block his momentum.”

His brother-in-law and Kasey Kahne Racing driver Brad Sweet finished third – after starting ninth. He continues to sit in the runner-up spot in the championship points, but with points leader Logan Schuchart finishing sixth, Sweet is now 12 points behind him.

Schatz is still third in points – 28 points behind Schuchart – but relishes his victory. He won the season opening race at Volusia Speedway Park in February and hadn’t finished in the top-five since then until this weekend. He is now only four wins away from 300 career World of Outlaws wins.

“I’m very satisfied,” said an elated Schatz about his victory. “It’s a crazy time in the world. All we can do is do our part to be good people. We’re back racing. That’s the important part for us. That’s who I’m made of. Glad to be here. Glad you [fans] are all here. Hopefully we can get to a point where you can see my ugly face again without this mask and we can all have a great time like we used to.”

The World of Outlaws NOS Energy Drink Sprint Car Series returns to Beaver Dam Raceway in Beaver Dam, WI on Fri., June 5 and Sat., June 6 for another thrilling doubleheader weekend with $16,000-to-win on the line between the two days. Tickets are sold out for Saturday’s event, but you can still get tickets for Friday’s event by clicking here.