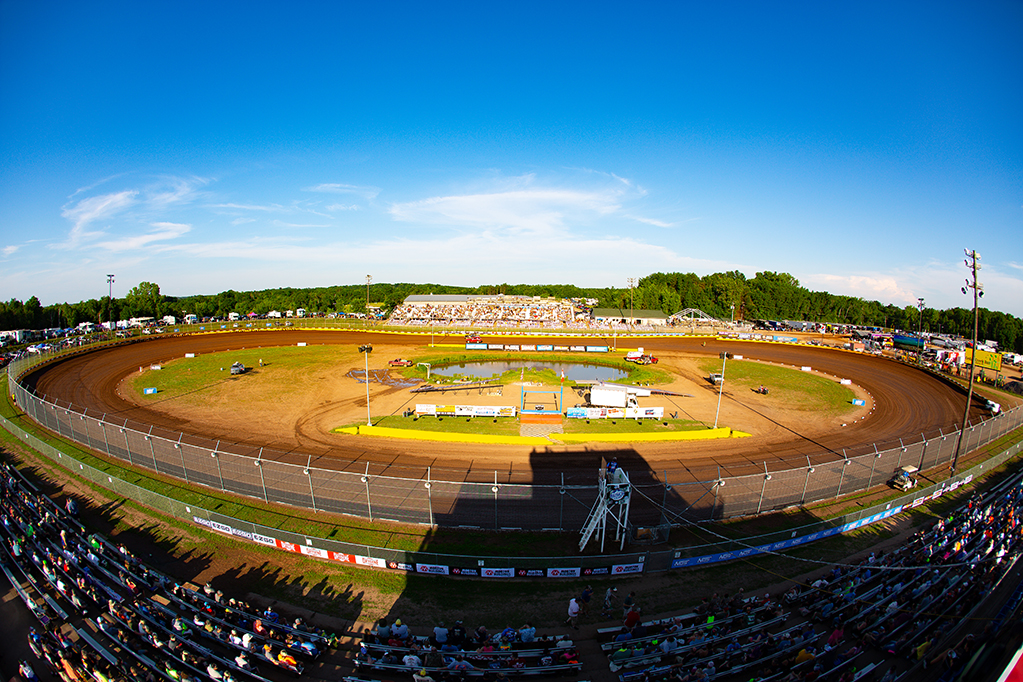 There’s no better way to celebrate America’s birthday than with The Greatest Show on Dirt.

Next month, the annual tradition of the Independence Day Spectacular rolls on with July 2-3 dates at Wisconsin’s Cedar Lake Speedway for the World of Outlaws NOS Energy Drink Sprint Car Series.

Marking the 41st event of a grueling 82-race schedule, the stop at the Cedar Lake 3/8-mile will officially bring the Series to the halfway mark on the 2021 season.

The second of three Wisconsin tracks on the schedule this year, Cedar Lake’s Fourth of July showcase will follow a trip to Beaver Dam Raceway on June 19 and precede a night at Wilmot Raceway on July 10.

Through 45 previous appearances at the New Richmond, WI facility, 19 different winners have made their way to victory lane with nine drivers claiming multiple wins. Slammin’ Sammy Swindell leads all drivers with seven scores to his credit, but 10-time Series champion Donny Schatz (5 wins) could equal him with a weekend sweep next month.

Schatz went five years between a pair of wins in 2009 and 2014 at the oval, and now it’s been another five years since his most recent win at Cedar Lake in 2016. His recent consistency, albeit winless, has helped propel the Tony Stewart Racing, Carquest, Ford Performance #15 back to fourth in the championship standings through 27/82 events.

Another active driver with plenty of winning experience at Cedar Lake is Brad Sweet. The two-time and defending World of Outlaws champion has dominated the track lately, winning four of the last six events all within the last three years. In 2020, The Big Cat swept the weekend which aired live on CBS Sports Network and paid him a cool $40,000.

The Grass Valley, CA native currently leads the championship chase in pursuit of his third-straight World of Outlaws title. His Kasey Kahne Racing, NAPA Auto Parts #49 has been stout this season, collecting nine wins in the first 21 races. They’ll have another 12 events in the month of June to build some more momentum ahead of Cedar Lake’s July opener.

“I don’t know what exactly it is, but something has clicked for us at that place,” Sweet spoke on his Cedar Lake prowess. “We’ve always run really well there even before we started winning, but it’s like we found that little edge and it’s put us over the top since. It’s a great place to celebrate the Fourth of July, especially with a win.”

Other full-time drivers with wins at Cedar Lake include Sheldon Haudenschild (2019) and Logan Schuchart (2016). Both are already multi-time winners this season and hopeful to extend those numbers in the

David Gravel leads the way among notables looking to breakthrough for their first triumph at the track. The Watertown, CT native has finished second on six occasions, a streak he hopes to snap next month with his Big Game Motorsports #2. They currently sit second int he championship chase with four victories behind Sweet.

Carson Macedo, who is currently positioned third in points, led more than half of last year’s Cedar Lake event before falling to finish a track-best of third. We’ll see if his move to the Jason Johnson Racing #41 can ultimately guide him to Cedar Lake glory.