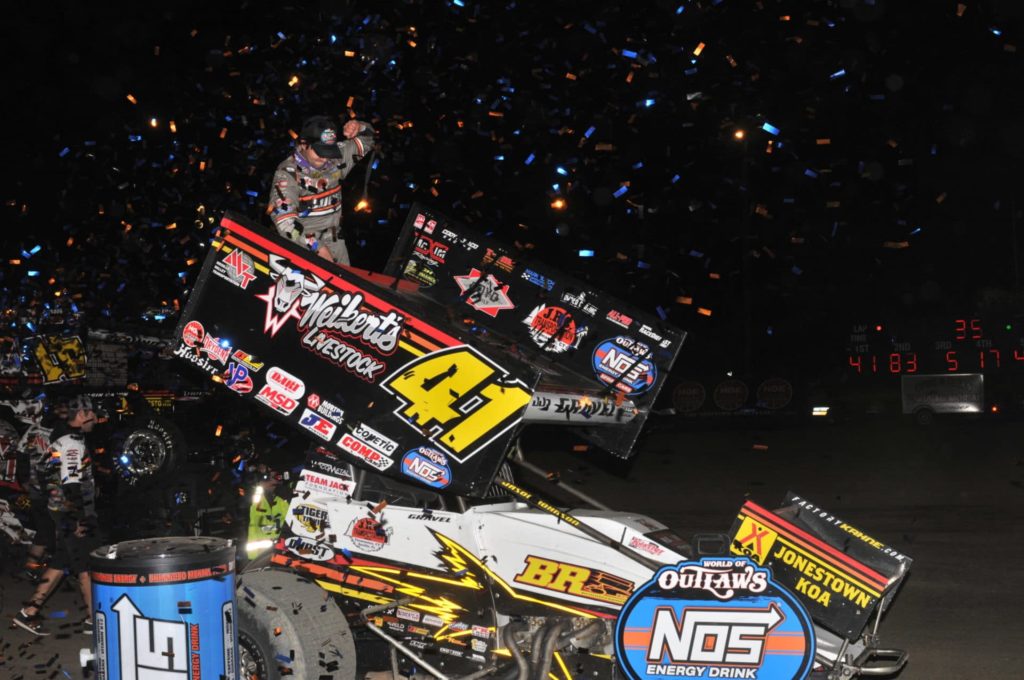 HANFORD, CA — Nothing was going to stop David Gravel from jumping out of his car.

Out of breath with a wide grin on his face, he high-fived and hugged his crew members while en route to a bath of confetti when he stood on the back of his car and pointed to the sky.

Not only was he celebrating his first win of the season at Keller Auto Speedway, his 40th World of Outlaws NOS Energy Drink Sprint Car Series win and his first win with his new Jason Johnson Racing team, he honored the man whose car he drives.

This is the first win for the Jason Johnson Racing team since co-owner and driver Jason Johnson died in a crash last June at Beaver Dam Raceway in Wisconsin.

The start of his night did not signal a potential victory, with the luck of the draw sending him out last for qualifying. He managed a 15th-place qualifying effort on a track several drivers called “tricky” due to its slick condition.

It didn’t take long for Gravel to figure out the trick, winning his Heat race.

“It really set us up for the rest of the night,” Gravel said. “I knew the bottom was going to be a factor.”

Gravel’s crew chief, Philip Dietz, said Gravel called his shot before the Feature. He was going to stick to the bottom until he figured it out. And he did.

Starting from the pole, Sheldon Haudenschild shot to the early lead of the Feature, riding the high side of the slick track. While he led, the hoard of drivers behind him were rarely in the same lane or position lap after lap. They tried high. They tried low. Wherever there was grip, they made sure to use up every inch of it.

Closing in on halfway through the 35-lap Feature, the bottom proved to be the preferred line of choice. Shane Stewart, who faced heart-break last race at the Stockton Dirt Track after blowing a tire while leading with five laps to go, looked to have his sight set on redemption, reeling in the 2017 Rookie of the Year.

Stewart took the lead on lap 20, but his hope for redemption was short lived as Gravel had been working the bottom of the track to perfection and was not far behind. He took the lead from Stewart – driving for Gravel’s former team, CJB Motorsports – two laps later.

“Honestly, I just didn’t have the patients to run the bottom in turns 1 and 2,” said Stewart, who ended up third. “Driver instincts, you just don’t know what to do at times. Once David went by me, I tried to run the bottom again, and missed it a couple of times. I thought I should get back up to the top and then (Daryn) Pittman got me.”

Pittman, who extended his points lead over second-place Donny Schatz to 12 points by finishing second, was still all smiles after his third runner-up finish of the year.

“I would have never guessed from the beginning of that race that we would be just putting around the bottom,” Pittman said. “We were not set up for that at all. I honestly thought the top would stay dominate. It never crossed my mind that we would be running the bottom.”

Like he planned it himself, Gravel said he knew other drivers would burn off the top of the track and the bottom would be the dominate line. He just had to stay patient enough to remain there throughout the race.

Although he did go to the top one lap, but he said that was only because the bottom was crowded. He ran his race.

“I was just trying to run my line,” Gravel said. “I knew if I missed up one corner and was still in the lead, I knew I wouldn’t have gotten passed if I just hit my marks after that. Luckily we were able to hang on and win.”

It was a special win to him and his crew.

After three races in-a-row without a top-10 finish, Elliot said the win is well needed.

Dietz added its “definitely an emotional night” for the team.

“This is one track we’ve struggled at over the years,” he said. “We knew we had to up our game when we came in tonight. To go out and pick up a win for JJR and all of our sponsors, you know, we couldn’t ask for a better night.”

Nothing was going to stop Dietz and the Jason Johnson team from celebrating in Victory Lane with an out of breath and wide grinning Gravel.

The Series will wrap up its Spring Break tour through California Saturday night at Perris Auto Speedway in Perris, Calif.

As always, you can catch all the World of Outlaws NOS Energy Drink Sprint Car Series action on DIRTVision.com.
For tickets and more information, go to www.WorldofOutlaws.com.