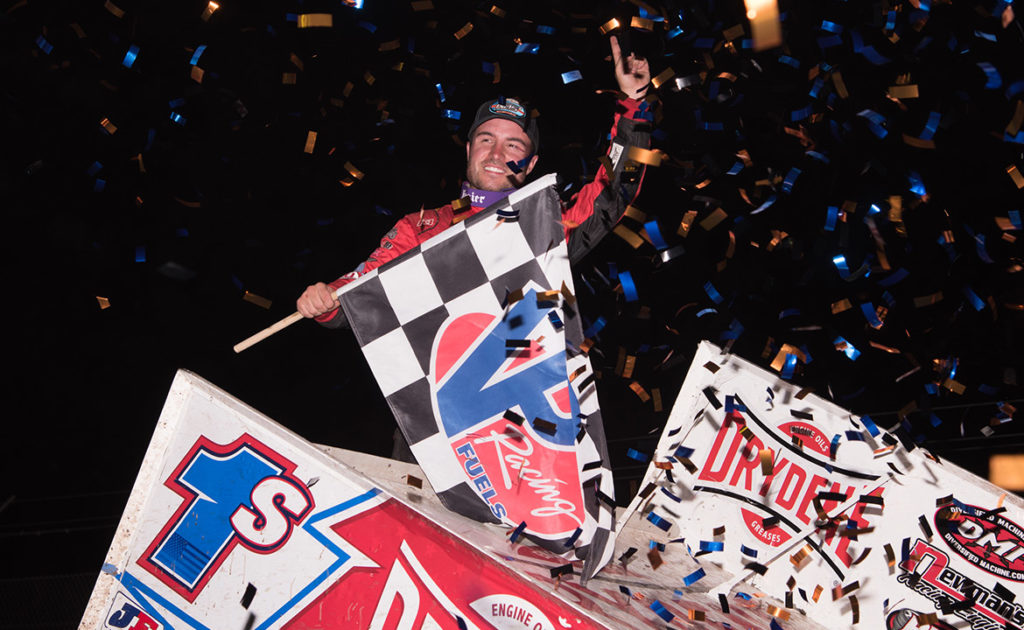 However, he could also see his Shark Racing teammate Jacob Allen leading, searching for his first World of Outlaws win. He couldn’t catch him. A runner-up finish looked like his calling, and he was OK with that.

Cruising down the backstretch, he saw Allen’s Drydene No. 1a car power into turn three, heading for two laps to go. When Schuchart exited turn four, he no longer saw Allen in front of him. The white and blue No. 1a slowed and pulled into the infield.

The lead was Schuchart’s. And after two clean laps, so was the win.

“It’s a tough deal,” Schuchart said of Allen’s affliction. “I’m happy to get the win. It’s awesome to have these cars up front. Whatever happened, this team works really hard to keep these cars on the racetrack.”

The victory was Schuchart’s seventh of the year – further breaking his record of winning at most four wins in a season – and 15th career World of Outlaws win overall.

While he celebrated in Victory Lane with his Drydene cladded Shark Racing team, Allen was back at the trailer diagnosing an ignition box failure with his crew under a full moon Friday the 13th night.

“Pretty much a heart break,” said a deflated Allen, trying to find the words to describe the loss. “It’s kind of tough.”

Schuchart and Allen went on to both finished second in their Drydene Heat races. Then finish third and second, respectively, in the DIRTVision Fast Pass Dash – won by Austen Wheatley.

Wheatley and Allen made up the front row of the 30-lap Feature – both attempting to win their first World of Outlaws race. On the initial start, Wheatley hit the throttle and wheeled onto the front stretch, allowing Allen to get the jump on him and pull away with the lead into the first turn.

His comfortable lead was eliminated in two laps when the first caution came out for Shane Stewart going off track in turn two. On the restart Allen launched back to the lead, but Wheatley stayed close and got side by side with Allen through the first corner. Allen had the better grip on the high groove and drove away from Wheatley down the backstretch.

While Allen ran away with the lead, David Gravel worked his way around Schuchart for third and after dueling with Wheatley for eight laps moved into second. By that time, Allen had found himself in heavy lap traffic. Gravel was able to gain yards on him every lap.

However, once Allen found clean air again, he left Gravel searching for speed by pulling away to about a straightaway lead.

With nine laps to go Allen caught more traffic, including Brad Sweet, and got loose exiting turn two. He lost traction exiting turn four, too, unable to hold his line. That allowed Gravel to go from being a straightaway back to being at Allen’s tail tank.

Allen continued to run the low line into turn one and Gravel darted high to try and get a run around him. However, the move cost Gravel a chance at a win. Going high opened the door for Schuchart to dive underneath. The two almost made contact at the apex of the corner, hurting Gravel most. Schuchart accelerated away from the Mesilla Valley Transportation No. 41 car down the backstretch.

“I kind of punched myself in the head there after that,” Gravel said. “I tried to pass Jacob on the top going into one and two, ended up giving the spot to Logan.”

Now, the only car Schuchart saw in front of him was his teammate. With seven laps to go inches separated the Shark Racing drivers due to a caution for Tim Kaeding going off track in turn two.

On the final restart of the night Allen rocketed ahead of Schuchart. He made it look like a race between a great white shark and a carp. Schuchart couldn’t keep pace with his teammate and in the closing laps found himself having to hold off a hard charging Schatz, who got around Gravel for third.

With three laps to go Allen wore the appearance of a first-time winner. Clean laps. No mistakes. And fields of clean air between the cars behind him and in front of him. Appearances meant nothing, though. While driving through turns three and four his fairy tale turned into a horror movie. His ignition box failed. Speed lost. Win lost.

“After that last restart it felt like it was kind of starting to lose power a pinch,” Allen said. “But it’s hard to say. You know, you’ve got a lot on your mind. There’re only a few laps left. You’re just trying to finish it and win the race. It’s a pretty shitty deal really. I don’t know. It sucks. I guess it’s just part of it.”

Allen’s misfortune became Schuchart’s gain as he inherited the lead and drove to his second straight win at the Stockton Dirt Track.

“He was way faster than I was,” Schuchart said about Allen. “It showed after the restart. It’s tough. Once Jacob got to the lead, he was gone. I couldn’t really hit my marks there for a few laps. I was just trying to make myself wide. I was happy to run second in this race. But I’m a competitor at the same time. I was going to try and pass him if I got the spot.

“Jacob, he’s been working really hard at this deal. It’s tough. It takes a lot out of you. Especially when you get beat all of the time. But he’s right there. We’ve seen it in the past. I hope he can get his spirit up and win one of these things. I’ve never been so big as a fan as I was running second tonight.”

While Allen’s slumped body posture and hanging head expressed his disappointment in his 17th place finish, he was still able to find the light in a gloomy situation.

“It gives you confidence for sure, just being that close and just leading laps,” Allen said. “Definitely a confidence booster. Probably the biggest thing, besides me getting my first win, is just knowing Logan was running second and we had a shot at getting our first one-two finish. Yeah, it’s not easy to be up front on any of these Outlaw races. I guess it just made me more hungry for the next time.”

Schatz finished second and Gravel had to settle for third. With Schatz’s runner-up finish he was able to retake the points lead over Grass Valley, Calif.-native Brad Sweet – who finished 10th – one race after Sweet took it from him. The reigning champion is now 14 points ahead of Sweet heading into the final California race of the year.

Schuchart is in a close points battle of his own. Sitting fifth in points, he is 38 points behind fourth-place Daryn Pittman after winning the NOS Energy Drink Showdown.

The Pennsylvania-native now has his sights set on a win at Calistoga Speedway.

The World of Outlaws NOS Energy Drink Sprint Car Series on Saturday, Sept. 14, will be at Calistoga Speedway in Calistoga, Calif. for the Wine Country Outlaw Showdown. Get tickets and more information.