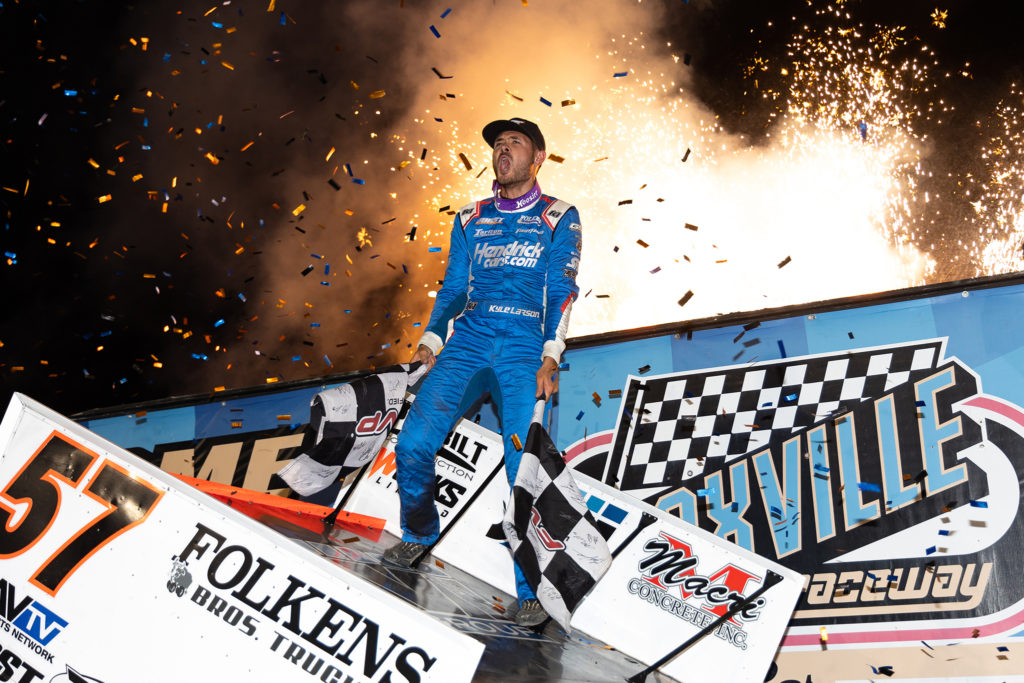 Kyle Larson first attended the Knoxville Nationals in 2005 when he was 13-years-old. He instantly fell in love with the auora of the place.

For 16 years since, the Elk Grove, CA kid has dreamed of standing on the stage at the race they call The Granddaddy of ‘Em All. On Saturday night, that childhood dream became a reality, and Larson won the biggest race of his life.

What made it even sweeter for the 29-year-old sensation is that he had to beat Donny Schatz to do it. The Sprint Car superstar turned NASCAR Cup ace has made it clear in years past that he wanted to beat the 10x Knoxville Nationals champion at his own game while the Tony Stewart Racing #15 legend was still in his prime.

In front of a sold-out crowd of more than 20,000+ spectators, Larson did exactly what he dreamed of. He beat Schatz heads up on the Knoxville 1/2-mile, but Donny gave him everything he could handle.

A near last-lap, last-corner pass resulted in a margin of victory of 0.478-seconds, which ultimately netted Larson a cool $176,000, the highest-payday in the history of the World of Outlaws NOS Energy Drink Sprint Car Series.

His breakthrough makes him the 27th different champion in 60 runnings of the NOS Energy Drink Knoxville Nationals pres. by Casey’s General Stores.

“I’ve always dreamed of winning this race,” Larson shouted in victory lane. “The atmosphere this week was unbelievable. I felt the energy all week long from you fans. It kept me excited and pumped up. I hadn’t been this nervous leading up to a race in a couple of years. I had butterflies all day and during [NASCAR] Cup practice all I could think about is what I needed to do here at the Knoxville Nationals.”

Before Larson stood on stage and soaked in the glamour, a 50-lap war had to be run first. He started the race from third while 19-year-old Giovanni Scelzi and his brother-in-law Brad Sweet occupied the front row.

From the jump, Scelzi took his KCP Racing #18 to the lead and paced the opening 10 laps, which was worth an extra $10,000 thanks to Knoxville’s lucrative lap bonus money.

On Lap 11, fifth-starter Donny Schatz roared to life and rocketed from third-to-first in almost one full swing. He stormed by Larson and promplty passed the teenager prodigy down the backstretch to lead Lap 11. The Tony Stewart/Curb-Agajanian Racing #15 proceeded to control the next 14 laps, until Larson went by on the 25th circuit.

Watching as Schatz slipped off the bottom, Larson railed the high side and drove his Paul Silva owned Finley Farms, Hendrick Automotive Group #57 to the lead off turn two as the crowd erupted. The halfway #OpenRed made it interesting when Silva elected to only change the right rear tire, while the TSR squad threw two new rear tires on the #15.

Larson ran the second half of the the race unchallenged, until the five-to-go signal was given and Schatz kicked it into high gear. The 10-time Knoxville Nationals champion erased a 3+ second lead and cut Larson’s advantage down to a single-car length as the white flag waved on Lap 49.

Schatz gave it his all and pulled alongside Larson out of turn four, but fell short by a mere 0.478-seconds.

“I was thinking about how to beat Donny all day,” Larson mentioned. “We’re just a little California team. Paul Silva is the best there is. I’m so fortunate to be with him.”

Schatz settled for a second-place result worth a record $89,000. The Ford Performance, Carquest #15 driver extended his miraculous stresk to 18 top-two finishes in 23 A-Main starts at the Knoxville Nationals.

Brad Sweet ended up third with a $37,500 check in hand. The Kasey Kahne Racing, NAPA Auto Parts #49 now turns attention to finishing the chase for a third-straight World of Outlaws championship next weekend.

Rounding out the top-five at Knoxville Raceway was Giovanni Scelzi in fourth and Logan Schuchart in fifth.

UP NEXT – The World of Outlaws NOS Energy Drink Sprint Car Series will run three races through the Dakota’s next weekend. The Greatest Show on Dirt will visit River Cities Speedway on Friday, August 20, then Red River Valley Speedway on Saturday, August 21, and Huset’s Speedway on Sunday, August 22.