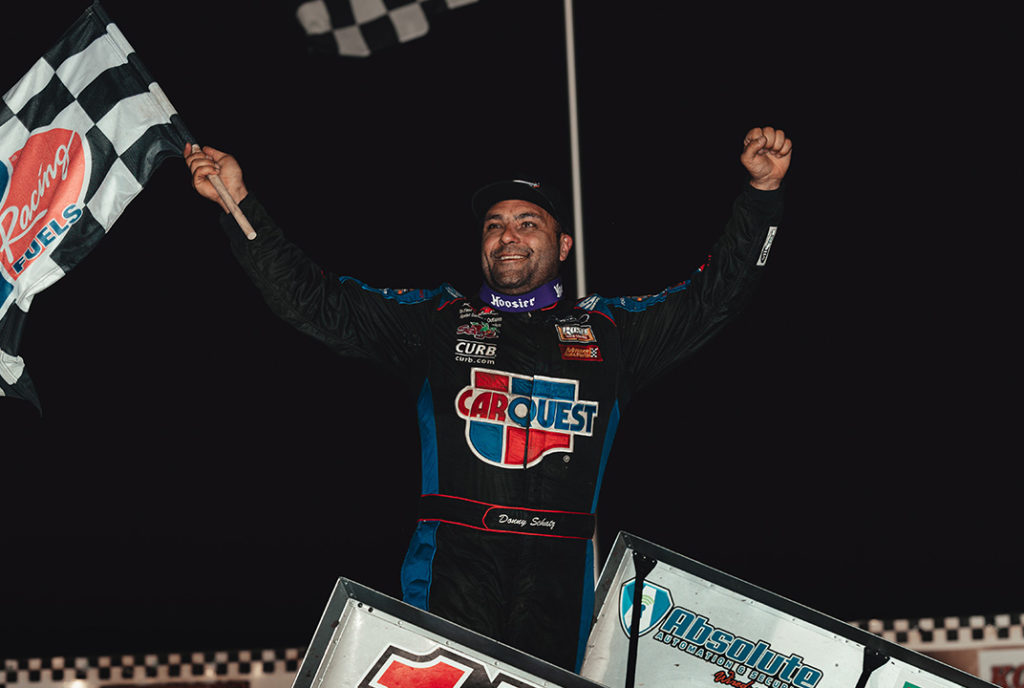 Whispers mirrored each other in Victory Lane. “That looked like the Donny Schatz of old.”

The sentence was said with wonder by some and fear by others. They’ve seen what happens when the 10-time World of Outlaws NOS Energy Drink Sprint Car Series champion puts on a performance like he did Friday night at I-80 Speedway for the FVP Platinum Battery Showdown.

Schatz, of Fargo, ND, started fourth in the 30-lap Feature and marched his way forward with an iron right foot, taking every position with the force of a determined winner. He had the lead at the conclusion of the first third of the race and then ran away with it. When the checkered was presented to the field, Schatz reached it first with a more than three-second lead at the 4/10-mile track.

It was the 302nd Series win of Schatz’s career and his first ever at I-80 Speedway – a feat even he was surprised by.

“First win here? Well, that’s always good,” Schatz said in Victory Lane. “I know we’ve been fast here in the past. I try to forget about what is behind me. It feels good to win. We didn’t really feel that great in the (DIRTVision FAST PASS) Dash. The guys took a huge swing with the race car and tried to make it better. And it obviously worked.

“That’s what’s fun about it when you can make those huge swings and make something happen.”

David Gravel presented himself as the driver to beat throughout the early stages of the night, setting Slick Woody’s Quick Time, winning his Drydene Heat Race and finishing second in the Dash. However, once the Feature commenced, the chance at a win slipped through his fingers during its progression.

Carson Macedo, who finished second at I-80 Speedway last year, started from the pole – due to his Dash win – and held command out front for the first 10 laps. His Jason Johnson Racing #41 looked smooth and in control in clean air, pulling ahead of the field by more than a second. Once lap traffic came into play around Lap 10, his rocket ship run hit debris and slowed. The timing couldn’t have been worse for the California native as Schatz was like a programmed bullet destined for the lead.

Cruising around the low line, Schatz officially took the top spot from Macedo on Lap 11 and was never seen from the other podium contenders again.

“Starting fourth, just tried to make the bottom work from the word go,” Schatz said. “I didn’t really know if that was going to work or not, but I stayed there and stayed there to figure out how to get it going. It worked.”

After Macedo lost the lead to Schatz, early predictions would’ve had him finishing in the runner-up spot as Gravel, in third, had his hands full with Sheldon Haudenschild. They’d be wrong. The NOS Energy Drink #17 of Haudenschild started third but fell back early before making his climb. He passed Gravel with 10 laps to go and was able to track down Macedo for second five laps later.

By that point, there was no catching Schatz. Haudenschild had to settle for his second runner-up finish in a row.

“He [Schatz] got a good gap on us,” Haudenschild said. “He started working the bottom early and got around me and the 2 and the 41. He was really good and got a gap. He was able to get to the lappers first and get a good gap. It is what it is. Ran second. Felt good. The car was really good all night.”

Macedo rounded out the podium in third. Behind him was a Roman colosseum-gladiator-flight-to-the-death war for the fourth and fifth spots. Gravel held fourth in the closing laps, but Brock Zearfoss, James McFadden and Gio Scelzi swung slide jobs and threw dive bombs at each other for the final five laps.

McFadden exited the victor, securing fourth-place at the line. He also earned the KSE Hard Charger award, having started 10th.

“We struggled early (in the night), I just couldn’t get comfortable for some reason,” McFadden said. “We threw a big setup at it. Something that has worked for us before. We thought we’d give it a crack. We had nothing to lose and it worked a lot. I wish we had a caution there with 10 or 15 laps to go. The car was really truckin’.”

Gravel finished fifth with Zearfoss in sixth and Scelzi seventh. However, for Zearfoss, it was still a win as the finish was his fourth top-10 in a row – a new career-best for the Jonestown, PA driver.

“We were really good early, just needed to be probably a little bit tighter there at the end,” Zearfoss said. “I got a little free. All in all, a really good night. I kind of messed ourselves up there in the Heat Race and got beat, plain as day.  Knocked ourselves out of the (DIRTVision FAST PASS) Dash draw there and potentially a position to win the race. Just shows how important it is to make the Dash.”

Glistening in the glow of his new light-up FVP Platinum Battery Showdown trophy, yet another milestone shined upon Schatz in 2021. Hard to believe he’s only visited Victory Lane three time, so far. First for his 300th win and now for his first at I-80 Speedway. However, if the whispers… “That looked like the Donny Schatz of old.” are true, we’ll leave the record books close by.

UP NEXT
The World of Outlaws NOS Energy Drink Sprint Car Series will make its final trip of the year to South Dakota, on Sunday, Aug. 29, for the Rushmore Outlaw Showdown at Black Hills Speedway. CLICK HERE for tickets.