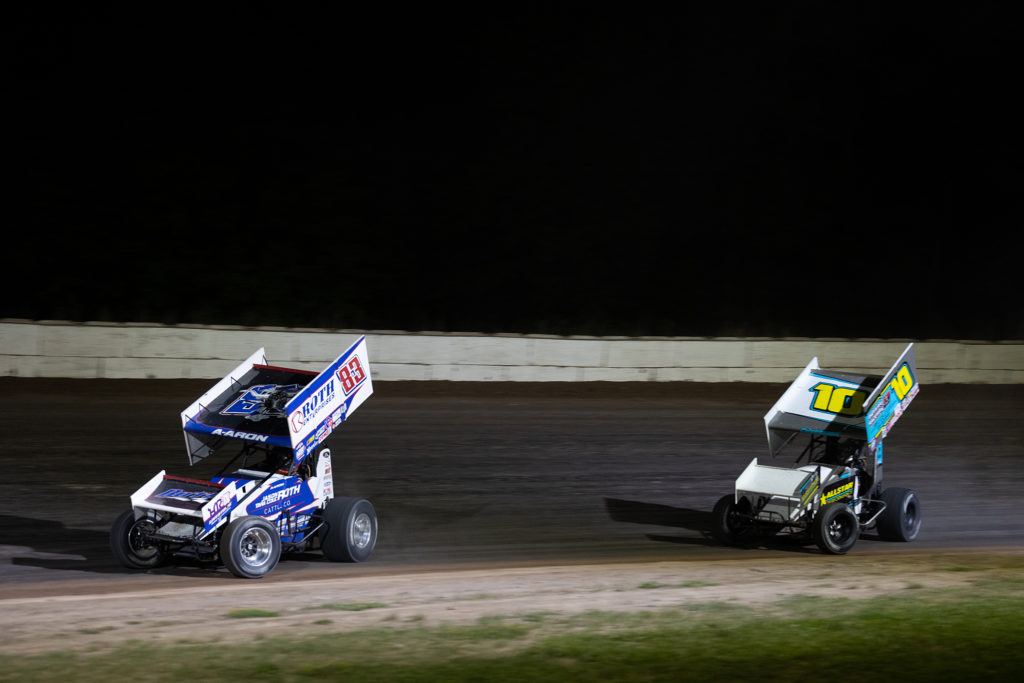 Ted Johnson’s ideology, which he unveiled to the world back in 1978, was on full display on Friday night.

At its core, the World of Outlaws NOS Energy Drink Sprint Car Series is all about the best group of racers in the world traveling from track to track to face the toughest local competition available; and that was exactly what New York fans witnessed at Ransomville Speedway.

Paulie Colagiovanni, a 20-year-old native of Cicero, NY, nearly did the unthinkable and beat the goliath that is The Greatest Show on Dirt. It was only his fourth career World of Outlaws Feature, but the kid was driving as if he possessed the veteran prowess of Donny Schatz, the calm mindset of Brad Sweet, and the fiery on-track attitude of Sheldon Haudenschild.

On the other end of Colagiovanni’s challenge was Aaron Reutzel, who admitted he was nervous when “the guy he had never heard of” was restarting on his tail with a green-white-checkered finish in play.

In the end, Reutzel led all 30 laps and secured his fourth win of the 2021 season aboard the Roth Motorsports #83. A victory that only builds his mighty resume as the Clute, TX native chases the distinguished Kevin Gobrecht Rookie of the Year Award.

However, watch the tape, read the tweets, or listen to the fans, there is no denying that Colagiovanni left his mark on this group of Outlaws.

“I really didn’t want to see that yellow,” Reutzel noted. “I’ve got a guy that I honestly have no clue who he is moving on up and passing Sweet, so I have no prediction at all of what he’s going to do. I was a little afraid of that, and those last two laps were nerve-racking.”

Starting from the outside pole of the 30-lapper, Reutzel rode under a barrage of fireworks as he battled by World of Outlaws championship leader Brad Sweet to take the initial command. A restart on Lap 2 opened the door for Sweet to fight back, but the Roth #83 was too strong and prevailed on the high line as he ran away from the field.

On Lap 12, fourth-starting Colagiovanni made his boldest move of the race, throttling around the outside of Sweet and threading the needle to put his PJC Motorsports #10 into the second spot. Beyond halfway and into the closing stages, Colagiovanni kept Reutzel at a reasonable distance but struggled to put himself in a position to make a bid for the lead.

With two-to-go, the caution flew for fourth-running Haudenschild with a flat right rear tire. A stoppage that brought the standing-room-only crowd to life in support of their home state hero.

The green-white-checkered finish fired off and Reutzel ducked low while Colagiovanni committed to the top. The local kid built a run with his momentum and was all over the #83 as the white flag waved and fans rose to their feet.

However, Reutzel was not to be denied, perfecting the bottom with the pressure mounting. Colagiovanni gave it one last shot through turns three and four, but A-Aron survived and beat him to the line by 0.325-seconds at the checkered flag.

“The track changed a lot,” Reutzel said. “It was technical and you really had to move around. I tried to keep my wing speed up and roll with momentum early, but once everyone on the bottom got the top dirty I knew I needed to move down for good. Hopefully, all of this bad luck is out of the way and we can get to winning as Dennis and Theresa Roth deserve.”

Not for a lack of effort, Paulie Colagiovanni officially crossed the stripe with a career-best second-place finish. In only four previous appearances, the 2019 Empire Super Sprints champion had recorded a best of 16th, and now he’s got silver around his neck.

“I was thinking I’d be thrilled with a top-10 hopefully, so to finish second against these guys is unreal,” Colagiovanni offered. “The track was good all night and I love ripping the top here. I think it faded over there in turns three and four, so I had to migrate to the bottom there at the end. I’m just thankful to be here. Wow.”

Sneaking on the podium during the final restart was Kraig Kinser, who earned his first Slick Woody’s QuickTime since May 2019 to start the night at Ransomville. It’s his second top-three finish of the 2021 season.

“We really missed in the Heat Race, but the car came around good for the Feature,” Kinser said. “You know you’re in the right spot when you’re up there racing with guys like Sheldon, David, and Brad.”

Rounding out the top-five was polesitter Brad Sweet in fourth aboard the Kasey Kahne Racing, NAPA Auto Parts #49, and Connecticut’s David Gravel in fifth with the Big Game Motorsports, Huset’s Speedway #2.

Closing out the top-10 at Ransomville was Carson Macedo with his 15th consecutive top-seven finish, Logan Schuchart with KSE Hard Charger honors in seventh-from-15th, Donny Schatz aboard the Tony Stewart/Curb-Agajanian Racing #15, James McFadden in his Kasey Kahne Racing #9, and Pennsylvania’s Brock Zearfoss in the tenth position.

UP NEXT: The World of Outlaws NOS Energy Drink Sprint Car Series continues its New York doubleheader tomorrow, Saturday, July 30 with the Empire State Challenge at Weedsport Speedway. Next weekend, the 14th Ironman 55

THE BANK IS OPEN: $100,000/Win Huset’s High Bank Nationals Only Three Weeks Away