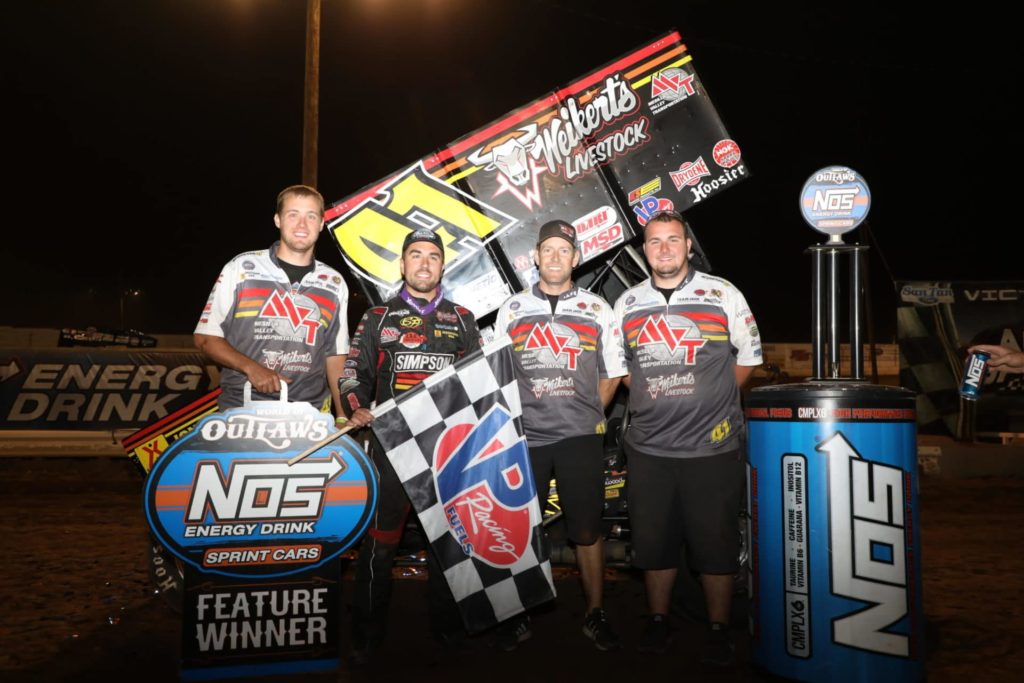 Not only did he win on his sister Victoria’s birthday, he claimed his 41st career World of Outlaws NOS® Energy Drink Sprint Car Series win in the #41 car – the number chosen by the late Jason Johnson to run.

“I’ve kind of forgot about it, because if you try too hard to win a race, you know, it’s not going to come,” Gravel said about looking for win number 41. “I knew the next one was going to be 41, but it didn’t really all click. I’m glad to win on my sister’s birthday and it’s cool to be my 41st win. All of those things coming together, I guess it was meant to be.”

Starting fourth in the 30-Lap Arizona Desert Shootout Feature, Gravel had his work cut out for him. He made his way by third-place Jacob Allen in a lap, but then had to contend with 2017 Rookie of the Year, Sheldon Haudenschild, and Friday night’s Feature winner Brad Sweet – the two fastest cars of the night.

Sweet was a tenth of a second off setting a new track record in Qualifying, and then went on to win his Drydene Heat race. He took the early lead in the DIRTVision Fast Pass Dash, but Haudenschild showed his muscle in the closing laps, powering by Sweet on the high side for the win.

Haudenschild then continued where he left off in the Dash, cruising to the lead in the Feature and pulling away from the field. His blistering pace put him in lap traffic a third of the way through the caution-free Feature, allowing Sweet and Gravel to get close enough to taste the lead.

Sweet used lap traffic to his advantage the night prior, besting Ian Madsen in the game of maneuverability through slower cars. That looked to be his fortune once again, until Gravel continued to make ground on him. While Sweet reeled in Haudenschild, Gravel had Sweet locked in his visor.

The two battled side by side for about four laps, swapping lanes every corner. By Lap 13, Gravel mastered the bottom of the tacky track through turns three and four, clearing Sweet down the front stretch and maintaining the position with a run on the high side of turns one and two.

That run not only cleared him of the blue Kasey Kahne Racing car, it put him in striking distance of Haudenschild’s car. While Haudenschild tried to maneuver around a lap car in turns three and four, Gravel pulled the same move on him that he pulled on Sweet, claiming the lead on Lap 14 and never relinquishing it.

“He (Haudenschild) didn’t hit his exit, and that just opened the door for me,” Gravel said. “Luckily, it all worked out. Whatever lane I went, I seemed to be faster.”

Haudenschild concurred with Gravel’s assessment of the race, acknowledging he made a mistake.

“I figured if I could just rip the cushion and make consistent laps, I’d be alright,” said Haudeschild, who ended up third. “Once I got to lappers and the guy was running the top, I really didn’t make a good move. Like David said, I lost my run off the exit.”

After starting the season with four finishes in-a-row outside the top-12, the Wooster, Ohio native has found consistency. He’s finished in the top-10 in his last five races – two of which have been top-five finishes.

“It’s been kind of a rocky start, but we’ve been building momentum here in these last few races,” Haudenschild said.

On a more consistent run is second-place finisher, Sweet. He’s finished in the top-five in six of his last seven races – four of which have been podium finishes, and one a victory. That’s placed him as the current Series points leader – four points ahead of reigning champion Donny Schatz.

“It’s always cool to lead the points, but I don’t even think we’re a tenth of the way through the season,” Grass Valley, Calif. native, Sweet said. “It’s going to be a long summer. As long as we keep getting better and standing on the podium, the points will shake out how they will at the end.”

Gravel, of Watertown, Conn., became only the second driver this year to claim more than one victory – Daryn Pittman was the first winning both races at Volusia Speedway Park.

With win number two out of the way, Gravel looks for more consistency with his Jason Johnson Racing team.

“That first win, we struggled, got a win, the next day ran 12th,” Gravel said. “Now, this weekend (in Arizona) we went third and first. As a team, that’s what you’re looking for, is having podiums and top-fives. That’s what makes a good season.”

The Greatest Show on Dirt will make its next stop Friday, April 12, and Saturday, April 13, at the historic Devil’s Bowl Speedway in Mesquite, Texas.