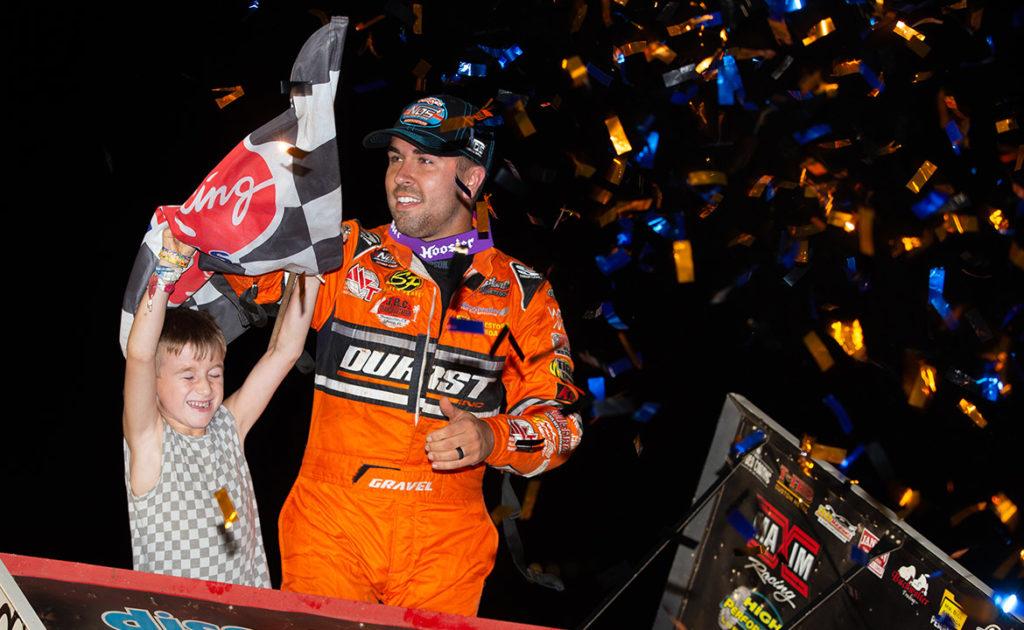 He had six laps and two cars to pass to achieve that goal in the DIRTVision Fast Pass Dash – which lineups the first four rows of the Feature by the finishing order.

However, once the Dash commenced, he made quick work of the task. He blew by local PA Posse members Brock Zearfoss and Lance Dewease on the first lap to take the runner-up spot and hold it until the finish.

With his goal achieved, he knew the race could be his. His main obstacle was to steal the lead away from polesitter and 10-time World of Outlaws NOS Energy Drink Sprint Car Series champion Donny Schatz.

When the Feature went green, he made it so.

Gravel led from green to checkers at the historic half-mile Pennsylvania track, earning his seventh win at the speedway, his third win of the season and the $20,000 top prize.

“Clean air in winged (Sprint Car) racing is so important,” said Gravel, of Watertown, CT. “We’ve been struggling with the pill draw in the Dash and we finally got a good one. You wanted to start on the outside row there (for the Feature). My goal was to finish second. I knew if I could do that, I could get the jump on the start and control the race.”

The top lane was dominate all night with those starting on the outside pole always getting the jump on starts to take the lead. The Feature was no different with Gravel pulling ahead of Schatz for the lead before they entered Turn 1 on the initial start. With the advantage of clean air, Gravel could pull ahead of the field by a second in one lap.

Schatz was the first to try and contend with the Jason Johnson #41 car, but his fight lasted two laps. With a pop heard among the roar of the 25 410 c.i. engines, Schatz’s car appeared to be the source of the sound as he slowed to a stop on the backstretch during the second lap of the Feature. The undiagnosed mechanical issue was enough to take the Tony Stewart/Curb-Agajanian Racing #15 car out of the race – Schatz’s first DNF since September.

With Schatz out of the race, that moved Lance Dewease into second and reigning champion Brad Sweet into third. Four cautions – including an open red – gave Dewease four opportunities to try and challenge Gravel but each time Gravel was too strong. Dewease couldn’t stay with the Mesilla Valley Transportation #41 car on the restarts and eventually feel to the clutches of Sweet.

“I knew Lance is known to slide himself in (turns) three and four and carry a lot of entrance speed, so I was just trying to protect on the restarts,” Gravel said. “I knew running the top I was getting a lot of momentum on exit. I just hoped I had a big enough gap and luckily it worked out.”

Sweet got by Dewease for second in the early stage of the race, but only held the position for a lap before the famed Hess Iron #69K drove its way back by Sweet’s NAPA Auto Parts #49 car. From then on Sweet became a pong ball between Dewease and fourth-place Logan Schuchart. Some laps he’d close on Dewease and others he’d fad and have to fend off Schuchart.

By the end of the 30 laps, Gravel crossed the finish line with a 4.1 second lead over Dewease. Sweet held on to third to round out the podium.

“With the way the race track was tonight, we weren’t very good,” Dewease said. “I was happy with the single file starts. I got real tight after that red (flag). Brad kept getting runs at me and runs at me. We had a pretty good race there sliding each other and I run back by him. I was just happy to finish second with the way the track was tonight.”

Schatz’s misfortune handed the points lead back to Sweet, who now has an 18-point lead over second-place Logan Schuchart – who finished fourth in the Feature. Schatz fell to third – now 26 points behind Sweet.

“I saw Donny have his issues but (points) didn’t even cross my mind,” Sweet said. “I just kind of thought, it moved me up a spot. We just want to win.”

Sheldon Haudenschild’s hot streak of top-10s came to an end Saturday night due to a broken rear end. Before the night, he had 18 top-10s in a row, including his win at Lincoln Speedway. He is still fifth in points, but now 100 points behind Sweet.

Carson Macedo, who struggled at Williams Grove Speedway last year, had a solid weekend, finishing ninth and eighth, respectively. He maintains the fourth rank in points – 70 points behind Sweet.

While Gravel is out of the hunt for the points championship this year after missing a race during the DIRTcar Nationals, Jason Johnson Racing is still in the hunt for the team championship. JJR is tied with TSR for third in points – 26 points behind Kasey Kahne Racing with three months of racing to go in 2020.

The World of Outlaws NOS Energy Drink Sprint Car Series returns to Wayne County Speedway in Orrville, OH for the first time since 1985 on Sat., Aug. 1. Get tickets by clicking here.