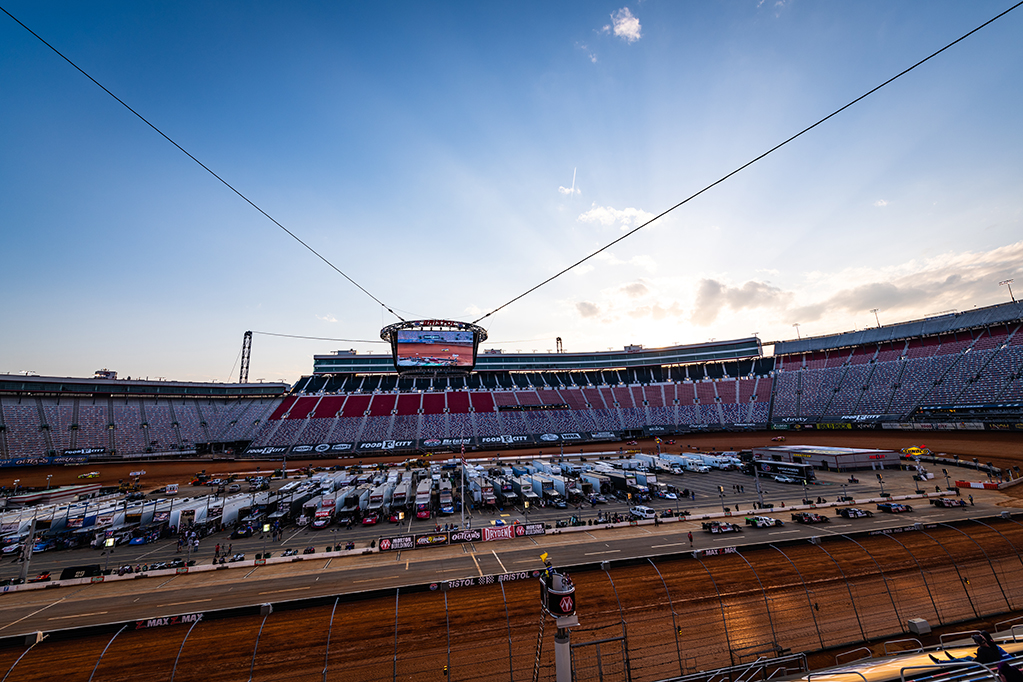 There’s Eldora, Knoxville, Williams Grove, Port Royal, Bulls Gap, and many more, but nothing is quite like Bristol Motor Speedway.

For the first time in 20 years, the World of Outlaws NOS Energy Drink Sprint Car Series is returning to race at The Last Great Colosseum, and it all goes down this weekend with the Bristol Throwdown on Thursday to Saturday, April 22-24. Fan can BUY TICKETS HERE.

Before the highly-anticipated show kicks off on Thursday night with an evening of practice, we heard from two World of Outlaws champions on what they’re expecting. Here’s what Donny Schatz and Brad Sweet had to say…

“I was a lot younger back then,” Schatz said. “I remember the atmosphere was just incredible. Being inside a stadium like that, the colosseum is an accurate name. I had never seen so many people at a dirt race in my life. It’s hard to put into words what the banking and the speed looks like until you see it with your own two eyes; the camera does it no justice.”

While Schatz is a World of Outlaws winner on the Bristol half-mile, Sweet will be making his first laps in a Sprint Car.

“It’s exciting from a standpoint that we never get to race in venues quite that large,” Sweet mentioned. “You also feel like you’re going to see a huge crowd due to the anticipation of waiting 20 years. On the drivers side, it’s a bigger, more banked half-mile so you’re a little nervous. Once we get there and practice, we’ll feel good about it hopefully.”

When asked for comparisons to the Tennessee speed plant, both focused on Eldora, but offered up another analogy as well.

“Eldora is probably the closest comparison, or Bulls Gap in Tennessee has some massive banking as well,” Schatz offered. Sweet concurred: “Eldora has pretty good banking and it’s obviously fast, but Port Royal up in Pennsylvania has similar type length of straightaway. But as far as length, banking, and unknowns of red dirt, this will be a different animal.”

One of the most talked about subjects of Sprint Cars at Bristol is the raw speed. Schatz weighed in on that.

“Sprint Cars are a lot more notorious for the overall average speed,” Schatz noted. “I think the average was like 151 MPH, but that was 20 years ago and now we have better motors, better shocks, and everything is better in today’s age. I don’t think there’s any question that the speeds are gonna be up there. If I remember right the top speed on straightaways was like 168 MPH last time.”

For Sweet, he’s had the benefit of leaning on his brother-in-law Kyle Larson. He’s raced both Late Models and NASCAR on the dirt half-mile, and will make his season-debut with the World of Outlaws this weekend.

“I’ve been talking to Kyle [Larson] a good bit,” Sweet said. “He kind of made us all feel a little bit better going into it. He said once the track slicks up, it feels a lot more like a normal race track. That was reassuring.”

Practice is something the World of Outlaws don’t see often, so they’re taking advantage of Thursday’s session.

“Obviously we’ll use Thursday as an important practice day,” Schatz agreed. “We’ll have plenty of things to change be it aero, durability, engine, and a lot of other things to fine tune. The tire situation is also going to be crucial. All we can do is make a determination from there. We can’t speculate how it’s going to race until we actually hit the track.”

Sweet agreed the practice day is something new, but something appreciated.

“This is what we do for a living,” Sweet insisted. “We do this night-in and night-out. We don’t know the speeds we’re up against, though, and how the parts, tires, etc. will withstand it. Normally, we’ve got hot laps, qualifying, and we’re racing. The practice day will hopefully give us more time to process everything. We’re bringing our strongest, most durable stuff.”

With last week’s rain out, Bristol Motor Speedway could be the site of Schatz’s 300th career World of Outlaws win.

“The bigger tracks do seem to be more suiting to our situation and where we’re at right now,” Schatz  mentioned on the half-miles. “I just want to get over that hump. I know a lot of our partners at Sage Fruit, Ford Performance, Carquest, Advanced Auto Parts, and more are going to be there. I would love to get it done with them in attendance.”

For Sweet, a five-time winner in 2021, he knows the competition will be as stout as ever at Bristol.

“I know he’s having a down year, but I always regard Donny as my toughest competition,” Sweet said. “We’ve got a lot of young guys that are getting better like Logan Schuchart, he’s been unreal on the half-miles the past few years. Sheldon Haudenschild has been much more consistent and developed a lot as a driver. You’ve got David Gravel, Carson Macedo, Aaron Reutzel, and so many more. Plus Kyle Larson will be with us this weekend, and all of the other outsiders. I feel like this Series is as strong as ever.

This week’s festivals at Bristol include practice night on Thursday, a $10,000-to-win program on Friday, and a $25,000-to-win finale on Saturday. Fans can BUY TICKETS HERE to this can’t miss event.