Macedo brings Kyle Larson Racing its fourth World of Outlaws win of the season
By Nick Graziano September 26, 2019 at 6:31 am |

Rookie Carson Macedo knows if he wants to be an established World of Outlaws NOS Energy Drink Sprint Car Series driver and stick around the Series for a while, he needs to win races.

That mentality was ingrained in the young Lemoore, Calif.-native Wednesday night at Jacksonville Speedway when he out dueled Sheldon Haudenschild and Brad Sweet in an elbows up brawl to earn his fourth victory of the year.

“I can’t say enough about this (Kyle Larson Racing) team,” Macedo said. “Fourth win this year. I’m super stoked. Happy for them. Happy to get wins. That’s what it takes out here.”

The two young guns of the Series – in their first Feature race at the quarter-mile Jacksonville Speedway ­­– were set to duel. And they did.

Neither was willing to sacrifice an inch on the initial start, staying wheel to wheel as they crept toward the white start line. When it came time to hammer the throttle Haudenschild gave his more love than needed, showing the complete under belly of his NOS Energy Drink No. 17 as he powered to the flag stand. That allowed Macedo to get a run on the Wooster, Ohio-native into the first corner and take the lead.

Haudenschild dove underneath Macedo into turn three and nosed in front of him through turn four. However, he did another wheelie on the exit of the turn, allowing Macedo to charged back out front. Haudenschild would not let the Californian get away, though. He stayed on his bumper down the straightaways and could power to his inside every corner. 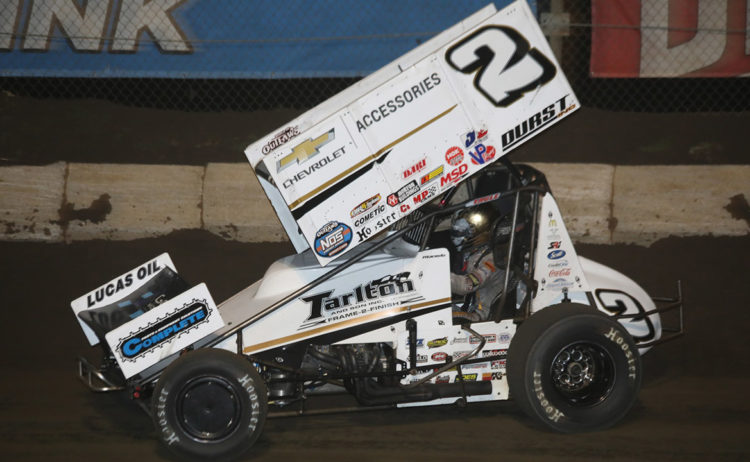 The quarter-mile track was proving to be fun for some and tricky for others, as several cars bounced off the cushion in turn four or over throttled their way into the corner causing them spin – or nearly do so. The fastest line was around the top, against the cushion – a line most comfortable for Macedo and Haudenschild.

Two cautions came out in the first 12 laps of the 40-lap Feature. Macedo was able to launch ahead of Haudenschild on both restarts, but the Ohio driver continued to pester Macedo each lap. The Kyle Larson Racing car was rarely out of reach.

On Lap 14, Macedo did a quick wheel stand off turn four, allowing Haudenschild, with a full steam of momentum, to throw a slide job into turn one and exit turn two with the lead.

Three more cautions came out between Lap 18 and 21 for drivers either spinning or coming to a stop on the track. On the restart with 19 laps to go, Haudenschild rocketed out front. Macedo spun his tires and got passed by Shane Stewart for second.

Macedo wasn’t willing to let the win slip away. To continue to establish himself, he needed it.

Finding grip on the bottom of the speedway, Macedo charged his way back by Stewart and looked to find his rhythm to catch Haudenschild. He didn’t have to put too much effort into it though. Another caution came out a few laps later for several cars colliding in turn four and blocking the track.

He slid his car too far up the track in turn four, hammering the cushion with his right rear tire and lifting the front of his car off the ground. With a clean run around the bottom, Macedo raced by the upset NOS Energy Drink car and reclaimed the lead.

“You get through there (turn four) really nice if you hit it right, but a couple of times you get tight on the right rear and get into it too much and throw your front end into, so you just had to be really careful,” Macedo said. “Get your entry right. Make sure you had the car turned enough and enough throttle to get through there on the cushion. My car was really good. Especially late in the race. I felt like I kept gaining momentum and gaining speed. That’s what you want.”

While Macedo and Haudenschild continued their close battle for the lead, Sweet, Aaron Reutzel and Donny Schatz were slowly making their way to the front. After Stewart spun, with 10 laps to go, Sweet moved into the position with Reutzel also moving up to fourth and Schatz to fifth. Four laps later, heartbreak for Haudenschild. He too spun, bringing out the caution.

It proved to be a task he was up to. He pulled away from the field on the restart and comfortably cruised his way to his first win Jacksonville Speedway victory – in his first official start at the track. Sweet remained second and Reutzel rounded out the podium. Haudenschild ended the night 15th.

Macedo credits some of his success to having grown up in California where there are several small bullring sized tracks like Jacksonville Speedway.

“Growing up there, you either get good on small tracks or you get beat because that’s a lot of what we have,” said Macedo, who won on the quarter-mile Silver Dollar Speedway in March. “I guess it just helps to be from California when you go to places like these.”

Sweet, of Grass Valley, Calif., also benefited by picking up another podium finish and continuing to chip away at Schatz’s points lead. The 10-time Series champion now leads Sweet by 18 points.

“It was a bit of a marathon, but we’ll take a second-place run,” Sweet said. “We had a lot of battling to get where we got to. A lot of missing wrecks. Missing some spinning cars. And avoiding contact. It was nice to get the finish.”

Coming into the season Macedo’s goal was to win a few races. Now, having exceeded that goal, his latest win helps he and his team realize their ultimate goal.

“We’re building,” Macedo said. “This is a five-year, six, seven, eight-year plan to try and be at the top at some point. That’s what we’re trying to do. To be out here winning races and build toward next year… it’s all building blocks. We couldn’t be happier.” 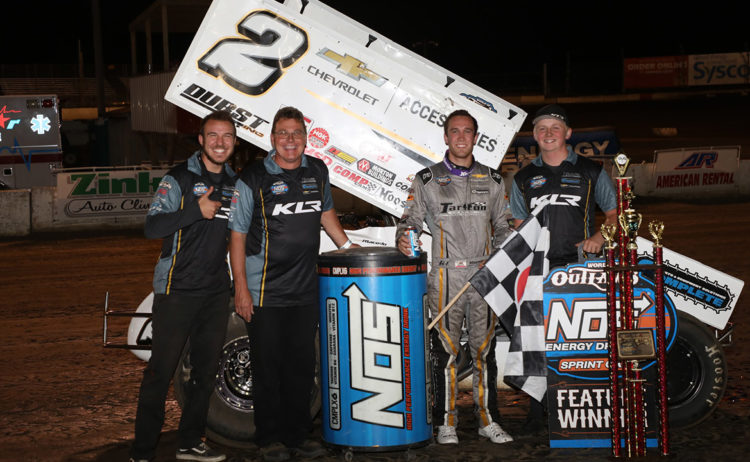 The World of Outlaws NOS Energy Drink Sprint Car Series on Friday, Sept. 27, will return to Eldora Speedway for the BeFour the Crowns Showdown. Get tickets and more information.

As always, if you can’t be at the race, you can watch all of the action LIVE on DIRTVision.com.