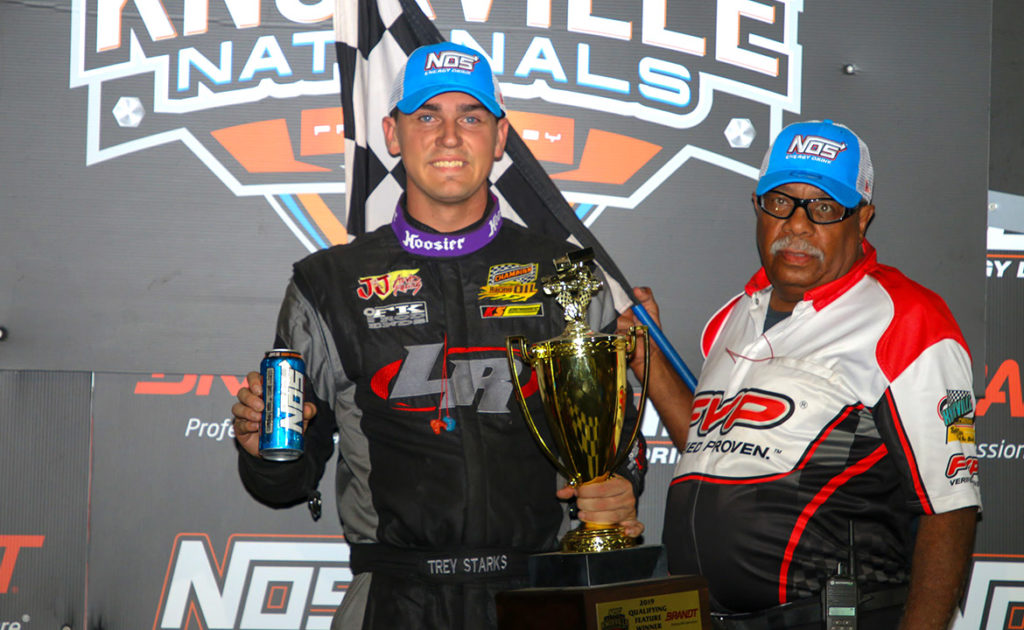 Dozens of people surrounded him. Four women dawning silver crowns and white sashes stood directly behind him like statues. To his right, the 2019 360 Knoxville Nationals winner James McFadden. To his left, the 2017 World of Outlaws NOS Energy Drink Sprint Car Series Rookie of the Year Sheldon Haudenschild.

With the microphone up to his mouth Trey Starks admitted with a chuckle, “I don’t even know what’s going on right now.”

The Puyallup, Wash.-native had won his first race at the iconic Knoxville Raceway. Not just any race at the Iowa raceway, either. The Wednesday night event was the opening Qualifying race for the 59th annual NOS Energy Drink Knoxville Nationals presented by Casey’s General Stores.

The victory was not only a celebration, but a relief. He and his team have been dealing with bad luck the past couple of weeks, he said. Recently, he failed to transfer to the Feature for Sunday’s Capitani Classic at the raceway, ran out of fuel before the end of Monday’s race at Southern Iowa Speedway and then blew the motor in his 360 Sprint Car on Tuesday at the same track.

Wednesday night was a different story.

He started the night qualifying 15th, which put him in the sixth starting position in the Heat race. He raced his way to fourth-place, grabbing the final transfer spot into the Feature – placing him fourth for the starting line-up.

When the green flag was presented in the Feature, polesitter Mark Dobmeier pulled away with the lead and extended it through turns one and two riding the low line. Behind him, hugging the cushion, Starks powered around the outside of Haudenschild and McFadden to go from fourth to second in the first corner.

Starks and Dobmeier then traded lines. Dobmeier began running high and Starks down low – a line he said he never runs at Knoxville. However, he was making it work. The black and yellow Buffalo Wild Wings No. 13 was growing bigger in his visor every lap.

Nine laps in to the 25-lap Feature Starks dove underneath Dobmeier into turn three and slid up in front of him by the exit of turn four. The lead was then officially his on Lap 10.

“I knew Mark was going to like the top,” Starks said. “I myself like the top. I hardly ever go to the bottom here. Frankly, I’m awful at it. I did OK tonight I guess.”

Starks built a gap between he and Dobmeier, each lap, continuing to run the bottom. And while he pulled away, Dobmeier was had pressure from McFadden for second.

McFadden had a run brewing to drive to the inside of Dobmeier exiting turn four with 13 laps to go, but a caution came out for Scotty Thiel, who spun in turn three.

A few laps after the restart, Dobmeier found himself back on Starks’ bumper. Finding more grip on the high side, Dobemeier went side-by-side with Starks down the front stretch with 10 laps to go.

However, Starks still found enough grip on the bottom to hold off Dobmeier’s attack. He changed his line in turns three and four, sliding up to the high side in front of Dobmeier, killing his run, and driving away.

Four laps later McFadden was able to build up a run again to challenge Dobmeier for second and this time complete the pass. The Australian was then on the hunt for Starks.

While Starks kept his E-Z-GO No. 44 up top, McFadden was slowly gaining on him by placing his Wicked Energy Gum No. 9 on the bottom of the track. However, he hit the inside berm with his left front wheel a couple of times, upsetting the car and hindering his charge for the win.

“We were there if Trey made a mistake, but he didn’t,” McFadden said. “I feel like if the race was longer we would have had a little bit more of a shot. But could’ve would’ve should’ve.”

McFadden ran out of time and had to settle for second. Haudenschild, after having to make a couple of big saves with his car during the race, snuck by Dobmeier in the closing laps to round out the podium. Starks went mistake free and saw the checkered flag for the first time at Knoxville Raceway

“We were solid in Qualifying, put ourselves in a decent spot,” Starks said. “We picked up the positions that we needed to in the Heat and I think we made the right adjustments and I made a couple of key decisions in the Feature that put us here where we are. It’s not miraculous what happened, it’s just not necessarily expected. We were just hoping for a solid night and build some good points.”

He did that, too.

His performance in qualifying, the Heat race and Feature earned him enough points – 463 – to be ranked fifth out of the 53 cars entered in Wednesday’s race.

Fifty-two more cars will compete Thursday night to also collect points. The top 16 in points, combined from the two nights, will lock themselves into the Knoxville Nationals Feature on Saturday. Aaron Reutzel is the current points leader – 487 points – with a second-place qualifying effort, runner-up finish in his Heat race and fifth-place finish in the Feature.

While points were important to Starks, his emotions were too focused on getting his first Knoxville win.

The World of Outlaws NOS Energy Drink Sprint Car Series on Thursday, Aug. 8, will return to Knoxville Raceway for the second Knoxville Nationals Qualifying race. If you can’t be there, make sure to catch all of the action LIVE on DIRTVision.com.

Get tickets and more information.