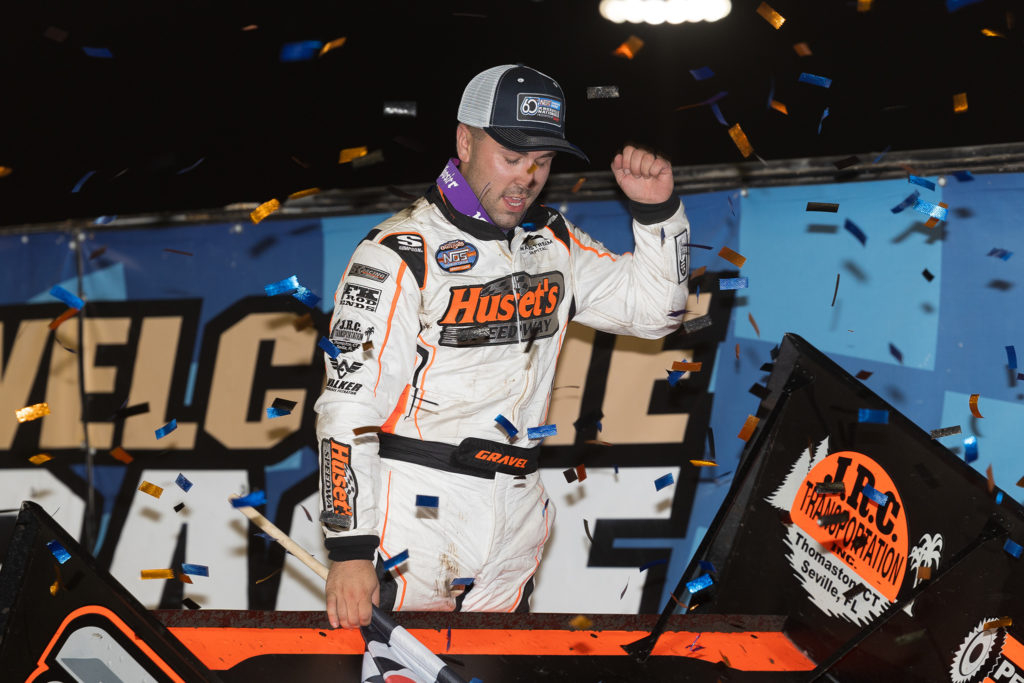 The 60th NOS Energy Drink Knoxville Nationals pres. by Casey’s is beginning to look a lot like the 59th edition.

In 2019, when The Granddaddy of ‘Em All was last held, the week started with a Capitani Classic victory and a preliminary win for David Gravel. He ultimately drove the Jason Johnson Racing #41 to his first Nationals title worth $150,000 on a day that came exactly two years ago yesterday.

In 2021, Gravel’s Nationals has started exactly the same way, except this time he’s piloting the Big Game Motorsports, Huset’s Speedway #2 owned by Tod Quiring. An equally potent machine that the Watertown, CT native is shining aboard.

Conquering Wednesday’s prelim at the Iowa 1/2-mile, Gravel’s victory was far from a surefire thing as Tea, SD native, and weekly Knoxville racer Justin Henderson led 21 of 25 laps in the A-Main before fading to 4th. Gravel’s saving grace was a car set up for the late stages, the timing of lap traffic, and a pitch-perfect slide job in turn one with four to go.

When it was all said and done, though, 19-year-old Giovanni Scelzi of Fresno, CA is who walked away as the Knoxville Nationals high point man following the first of two preliminary shows. The kid they call “Hot Sauce,” who just aced the 360 Nationals last week, was outstanding with a 410 under the hood of the KCP Racing #18. He racked up 487 points by qualifying second, finishing fourth-from-eighth in his Heat Race, and charging from eighth-to-second in the A-Main.

However, the talk of town remains 29-year-old Gravel and his ever-growing prowess on Knoxville’s black zook clay. He walked away from the night sitting third in the point standings, signs of a Saturday starting spot in rows two, three, or four.

“Knoxville has always been good to me,” Gravel noted in the post-race press conference. “I’ve always felt comfortable here. Obviously winning on Sunday gives you that bit of extra confidence and that is huge at a place like this. My car felt great everywhere I went, so that’s a good sign for Saturday.”

For the locals, the story of the night was Justin Henderson, who ultimately finished fourth. He started outside pole aboard the Morton Buildings #7 and paced the opening 21 circuits before Gravel cleared him with a turn one slidejob in lap traffic. He leaves Wednesday night sitting seventh in the points with a strong chance to make his fifth Knoxville Nationals A-Main.

“I just needed to be smarter, or maybe more aggressive,” Henderson admitted. “David drove by us really because he was just better,  but I gave those spots away to Gio and Donny by searching around when I didn’t need to. I’ve got to make better decisions in that aspect next time.”

Capitalizing on Henderson’s mistake to claim podium positions was Scelzi in second and Donny Schatz in third.

For Giovanni, who is hot off a 360 Nationals title on Saturday and currently holds high point honors, it’s only more momentum for him heading into the biggest race of his life on Saturday.

“I feel like I’m ten times the racer that I used to be,” Scelzi said. “Knoxville is a huge confidence track and I have all the faith in the world in my car and my team right now when we unload here. I just love this place. I can’t wait for Saturday.”

Closing out the podium was ten-time Knoxville Nationals champion Donny Schatz aboard the Tony Stewart/Curb-Agajanian Racing, Ford Performance, Carquest #15. He leaves Wednesday second in the points with his 23rd consecutive A-Main appearance waiting for him on Saturday.

“This was a rewarding night,” Schatz noted. “We have speed again. We’re in a better spot than we’ve been all season long, I think. I’m looking forward to Saturday and hopefully competing for another title.”

Closing out the top five on Wednesday night was Justin Henderson in fourth and Justin Peck in fifth, who pilots “The Pink Panther” Kramer Williamson throwback design for Buch Motorsports.

Rounding out the top-ten at Knoxville was Sheldon Haudenschild in sixth aboard the Krypto-NOS throwback, Logan Schuchart in seventh driving the Bobby Allen Shark throwback, James McFadden in eighth with his Kasey Kahne Racing #9, Cory Eliason with a new look Rudeen Racing #26 in ninth, and Spencer Bayston in tenth for Sam McGhee Motorsports.

Another headline on Wednesday was the story of 18-year-old Zeb Wise, who hadn’t even planned on racing this week. A last-minute call from CJB Motorsports landed him in the #5XX and the rookie put it on the pole position. He led the opening lap of the A-Main and was running a solid fourth before the rear end broke on Lap 9 and shattered a dream run.

The World of Outlaws NOS Energy Drink Sprint Car Series will be back at Knoxville Raceway on Thursday night for the second preliminary show of the 60th NOS Energy Drink Knoxville Nationals pres. by Casey’s. If you can’t be here, you can watch Every Lap LIVE on DIRTVision.