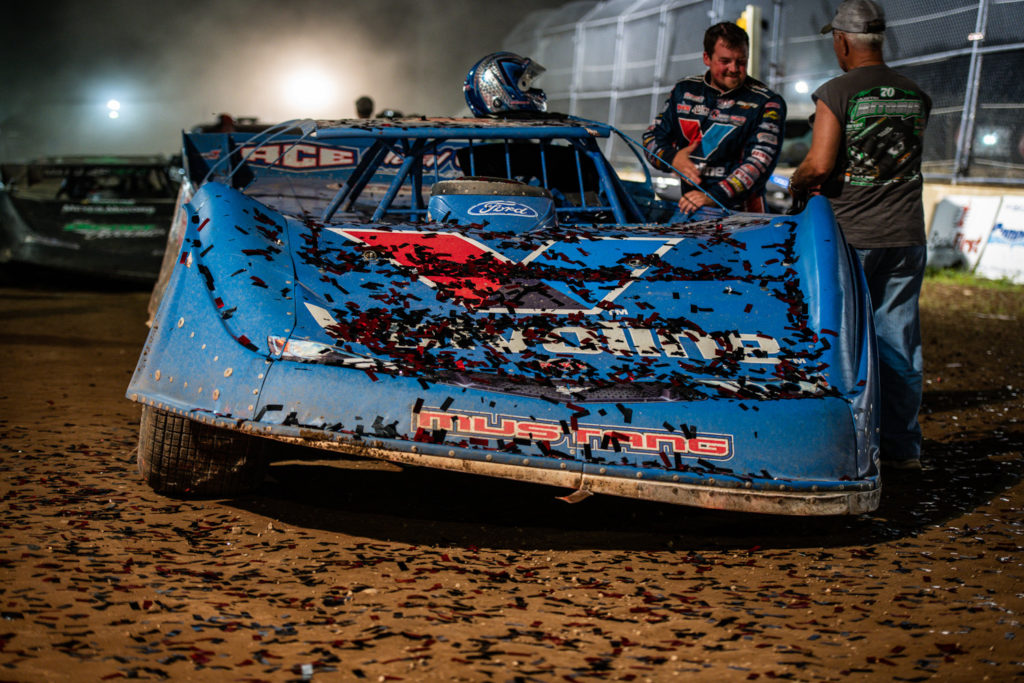 Brandon Sheppard and Rocket1 Racing always seem to find a way to rewrite the record books. On Saturday night, they did it yet again.

Controlling the final 39 laps at Plymouth Dirt Track, the New Berlin, Ill. native extended his record at the Sheboygan County Fairgrounds to three-for-three, winning in each of his appearances in 2018, 2019 and 2020. It was his eighth victory of the year (third-straight) and 63rd of his World of Outlaws Morton Buildings Late Model Series career. Most significantly, the 27-year old Sheppard became the winningest World of Outlaws driver in the state of Wisconsin, as he nabbed his tenth triumph in the Badger State to surpass Billy Moyer’s nine wins.

“I’ve got a little theory: Wherever corn grows good, we’re gonna have a good race,” Sheppard joked on his Wisconsin’s success. “But seriously, we all really look forward to coming up here. This trip north to Wisconsin and then our Western swing, that’s my favorite part of the whole year. We usually get around these tracks really good and they aren’t scared to work on them and give us a good racey place.”

Completing a clean sweep of the night, Sheppard’s conquest for the record books began with his 35th career Fast Time Award at 14.412 seconds, which marked his second-straight year as the fastest qualifier at Plymouth. He continued the onslaught with a dominant heat race win aboard the Valvoline sponsored No. 1 entry, then hit his biggest roadblock in the Morton Buildings Redraw when he pulled the #4 pill.

Lining up on the outside of row two, Sheppard quickly marched forward and slid into the second spot on the opening circuit, but it was Cade Dillard of Robeline, La. who gained early command. Jumping to the lead from the outside pole, Dillard bested fellow MB Customs runner, Jimmy Mars, into turn one and set his sights on a third career World of Outlaws Late Model win.

Quickly attacking Dillard for control of the lead, Sheppard offered a series of challenges that “Thriller” was able to swat away. Heading into lap traffic with back markers hogging every lane imaginable, the frontrunners had their work cut out for them facing traffic, a situation that would ultimately decide the race. Coming together with Brent Larson while trying to swoop around the outside, Dillard cut a left front tire on lap 11 and was forced to the work area during the feature’s first caution.

“I was pressuring him pretty hard there and he knew he had to go,” Sheppard said of challenging Dillard. “There was a lane for a minute, but then Larson went all the way out to the wall when Cade was trying to stick it in there and he got that flat left front. I hated to see that. Cade and I race so well together; he’s a clean racer and we had a good race going there. I was hanging right with him on the bottom over in turns one and two, I think we could’ve had a great race together.”

From there, it was smooth sailing over the remaining 39 laps for Sheppard, who went unchallenged en route to Plymouth victory lane for the third straight year. Contending with lap traffic all throughout the 50-lap, $10,000-to-win feature, “The Rocket Shepp” noted the challenges of working around back markers on the tight Wisconsin oval.

“I’m kind of planning in my head before I get to lap traffic, like three laps before when I see them I’m thinking about what line they’re running, what I think they might do, what I need to do when I get to them,” Sheppard noted on his strategy with traffic. “When you have a decent lead it’s not that bad, but rolling into traffic with pressure on you is how you start making those bad decisions. It’s hard to make the right decisions every corner, especially while leading. It got a little sketchy tonight because the bottom in turns three and four wasn’t as good as I thought and it got really black slick, then the top came in. It got pretty treacherous at times, but our car was super manueverable and I could put it wherever I wanted.”

While Sheppard ran off into the Wisconsin night, the battle behind him kept the crowd at attention with some heated moments. Over the final stages, fans saw a relentless Chase Junghans drive the wheels off his No. 18 machine with a pair of daring moves to first pass Scott Bloomquist around the outside and then Ricky Weiss with a monster slide job in turn three. While Junghans was attending to Jimmy Mars of Menomonie, Wisc. for the second spot with five to go, he received new company in the form of Justin Ritchie, a New London, Wisc. native on the prowl from tenth and charging for a career-best run with the World of Outlaws.

Ultimately, Mars survived the challenges and held on for a season-best second-place effort in his MB Customs No. 28M. Behind him in the third position was Ritchie, who sent the Plymouth crowd wild in his post-race interview, after becoming the second-straight Dirt Kings Late Model Tour competitor to put it on the podium against the World of Outlaws. However, in post-race inspection, Ritchie’s No. 70 failed to meet the quarter panel height check requirements and was docked three positions to a sixth-place finish, still a career-best for him.

Junghans of Manhattan, Kans. was credited with that third podium slot, while Weiss’ Drydene Performance Products No. 7 finished fourth, and Scott Bloomquist’s own Drydene No. 0 rounded out the top five on Saturday night.

Closing out the top ten at Plymouth Dirt Track was Ritchie in that sixth spot, Taylor Scheffler with his own career-best finish in seventh, Ashton Winger in eighth-from-16th, Darrell Lanigan in ninth aboard the No. 29V, and Rodney Sanders in the tenth spot after running fifth in Friday’s program.

The World of Outlaws Morton Buildings Late Model Series will take two nights off before resuming the Northern Swing on Tuesday night with an appearance at Gondik Law Speedway in Superior, Wisconsin. The mid-week show still pays $10,000-to-win with a 50-lap feature capping the program. Tickets are available for purchase HERE, but act fast because seats are limited.

REAPING THE BENEFITS: Gustin taking first year with World of Outlaws in stride