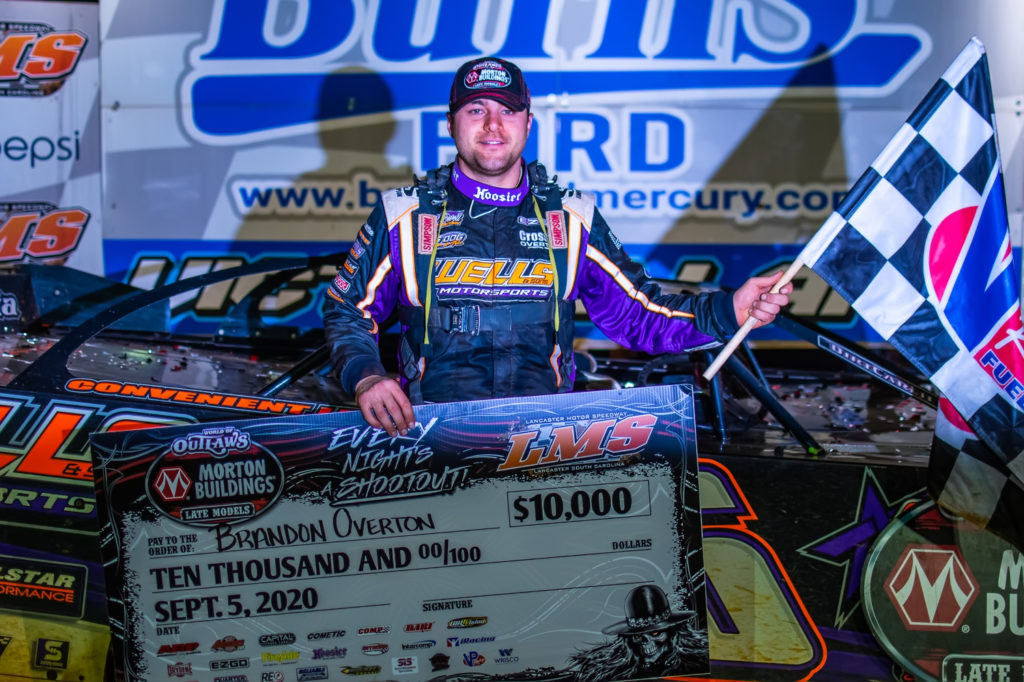 With the national touring stars of the World of Outlaws Morton Buildings Late Model Series in his own backyard this weekend, Brandon Overton of Evans, Ga. stepped up to the plate and continued to show the nation why he’s in contention for Driver of the Year in 2020.

Following his home state triumph at Georgia’s Lavonia Speedway on Friday night, “Big Sexy” kept the momentum rolling with a 50-lap beat down in Saturday’s stop at South Carolina’s Lancaster Motor Speedway. Going second-quick in qualifying and winning his Team Drydene heat race, Overton redraw the inside of row two for the feature; behind the front row of local Johnny Pursley from Clover, S.C. and Outlaw Ricky Weiss from Canada.

Immediately going to second on the start, Overton bided his time aboard the Wells Motorsports No. 76 before striking to take the lead from Pursley on lap 12. From there, it was game over. A few cautions tried to slow down his Clements Racing Engines powered Longhorn Chassis, but nothing could deter the 29-year old from another trip to victory lane. He commanded the final 38 laps with ease and cruised to a 3.012-second victory at the checkered flag.

Continuing his magical 2020 campaign, Saturday’s score gives Overton 11 career World of Outlaws Late Model wins with the last four victories all coming consecutively over the past month. He’s also up the 19 overall wins on the year, approaching World of Outlaws championship leader, Brandon Sheppard, who sits at 25 victories this season.

Giving chase in the early running, the Lancaster, S.C. crowd watched intensely as Johnny Pursley’s No. 9 commanded the field in puruit of his first career World of Outlaws Morton Buildings Late Model Series win. After leading the opening 11 laps, Pursley faltered to second after valiantly fighting for Overton for the top spot. While Overton set sail on the field, Pursley still had his hands full with a charging Ricky Weiss stripping the runner-up spot away on lap 17.

A caution near halfway offered up a thrilling restart with North Carolina’s Ross Bailes, who earned his third career World of Outlaws Fast Time Award in qualifying, capitalizing and passing The Bluegrass Bandit Darrell Lanigan to take third. The position jockeying continued throughout the 50-lapper, but really shuffled in the late stages when frontrunners runners Lanigan and Pursley succumbed to the infield with problems.

A lap 46 caution erased a monstrous 4.983-second lead for Overton and set the stage for a potentially wild final restart. However, Overton would have none of that. Firing on all cylinders, the Wells No. 76 immediately drove away from Weiss and the field to seal the deal on a dominating win at Lancaster Motor Speedway and complete the weekend sweep against the World of Outlaws Morton Buildings Late Model Series.

“We’ve got one hell of a hot rod right now; this thing is a joy to drive,” Overton said in victory lane. “Everything is just going so perfect for us right now. We’re really spoiled winning like this, because then you run bad and feel so horrible. These last couple of months have been amazing though, and I hope it doesn’t end anytime soon.”

Hanging on to his second-place finish, Ricky Weiss snapped a 22-race streak of finishing outside the top two, securing his first runner-up bid with the World of Outlaws since May 23 at Jackson (Minn.) Motorplex. Not only did his strong performance break a cold spell, but it also allowed him plenty of breathing room in the noteworthy battle for second in the championship standings between himself and Cade Dillard (-78), who ended with a DNF at Lancaster.

“This isn’t really my forte, so to run second and gain the points we did tonight is huge for us,” Weiss noted on racing the half-mile. “I like big tracks, but when it gets dirty like that, we start to struggle. We’ve been working so hard on this thing. It’s rewarding to get back up front. Hopefully it only grows from here.”

Rounding out the podium at Lancaster in third-place was Ross Bailes in the Big Frog Motorsports No. 58. Scoring his third career podium finish with the World of Outlaws Late Models, Bailes extended his success in the state of South Carolina. Each of his three top-three efforts have come at Cherokee in Gaffney, S.C. and LMS in Lancaster, S.C.

“We were really good at the start, and I thought we would be able to contend more throughout the race,” thought Bailes afterwards. “We had that long green flag run and I could feel my car starting to come in, but that caution killed us. I don’t know if my tires cooled down or what, but I just couldn’t fire the same after that. It took me 5-10 laps to get going and that cost us too much. I was hoping I could get up there and really give these Carolina fans something to cheer about.”

Following a rare mistake that sent him spinning from third on Friday at Lavonia, Brandon Sheppard of New Berlin, Ill. rallied nicely on Saturday with a fourth-place bid for the Rocket1 Racing No. 1 at Lancaster. Chasing him to the checkered flag and rounding out the top five was Dennis Erb Jr. of Carpentersville, Ill. with his third consecutive top five finish.

“Smokey” Chris Madden of nearby Gray Court, S.C. rebounded from his forgetful Friday at Lavonia with a sixth-place effort  at Lancaster in the Rum Runner Racing No. 44. Collecting his 26th top ten of the year in seventh-place was Chase Junghans of Manhattan, Kans. in the Shop Quik No. 18. Rookie Ashton Winger found his own vengeance by rallying from Friday’s crash to an eighth-place result on Saturday in the Rocket Chassis No. 12. Boom Briggs of Bear Lake, Pa. found his way back inside the top ten aboard the Rocket No. 1J, while “Downtown” Michael Brown closed out the top ten.

The World of Outlaws Morton Buildings Late Model Series will have the next two weeks away from the track before reconvening on Friday and Saturday, September 25-26 for a doubleheader in Knox Dale, Pa. at Thunder Mountain Speedway. As always, you can catch Every Lap LIVE on DIRTVision if you can’t make it yourself.