Inside Line Promotions – ANTIOCH, Calif. (Sept. 14, 2015) – Jason Sides can’t get back to the Midwest quickly enough.

Sides has a long drive to make this weekend’s World of Outlaws Sprint Car Series events – Friday at Clay County Fair Speedway in Spencer, Iowa, for the Arnold Motor Supply Shootout and Saturday at Deer Creek Speedway in Spring Valley, Minn., for the Clash at the Creek – after leaving California on Monday morning following a rough West Coast swing.

“Hopefully we can get on some smooth tracks this weekend,” he said. “When the car is good, I am good. When the car isn’t, I just ride it out. That’s exactly what happened the last few races.”

This qualifying position placed him in the third starting position in the second heat. When the track went green, Logan Schuchart assumed the lead followed by Tyler Walker and Saldana.  Near the end of the race, Walker four-wheeled over the cushion to pass Schuchart for the lead.  Walker won the heat, Schuchart was second and Saldana was third.  The Brownsburg Bullet’s finish position earned the Motter team a spot in the dash. 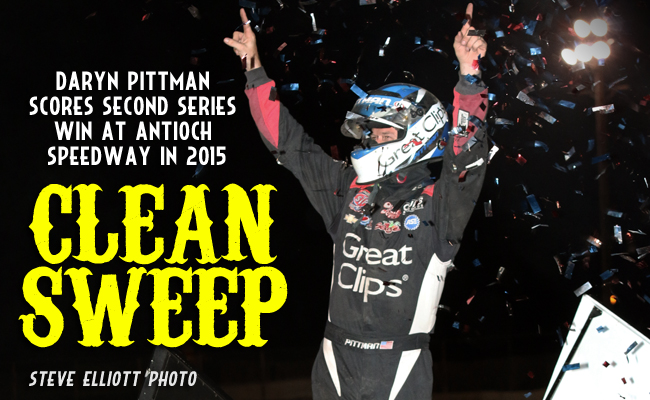 ANTIOCH, Calif. – Sept. 13, 2015 – Daryn Pittman picked up the 2015 Antioch Speedway sweep Sunday night after winning his second World of Outlaws Sprint Car Series feature of the season at the track.

Pittman fought a hard battle past Joey Saldana and then held off him and Tyler Walker through the remaining laps of the feature. It was the fifth series win of the season for Pittman and his Kasey Kahne Racing with Mike Curb team.

“Hats off to this whole Great Clips team,” Pittman said. “They do a great job. This was a different track than what we’re used to. Really dried up and we were free all night. I haven’t yelled much at (my crew chief Kale Kahne) all year that I was loose and all night we were pretty free. He got it pretty good there for the end. Obviously, we had some breaks go our way but man these guys just keep working their tails off.”

ANTIOCH, Calif. – Sept. 13, 2015 – Daryn Pittman held off hardcharging Joey Saldana and Tyler Walker at Antioch Speedway Sunday night to claim his fifth World of Outlaws Sprint Car Series victory of the season and a sweep of the Antioch events this season. Saldana battled past Walker in the final two laps to score his third straight second place finish. Walker closed out the night with a podium finish in third.

With 41 cars in the pits, the two-flight format was in play again tonight.  It was more ‘Cowboy up’ as the drivers tried to find the quickest way around a track that was faster than last night, but still tricky to negotiate.

CHICO, Calif. (Sept. 11, 2015) – Before we go racing tonight we pause to remember lives lost on one of America’s darkest days, 14 years ago. Today a resilient nation remembers the past, but looks to the future.

Tonight was the opening night of World of Outlaws Gold Cup Race of Champions competition at Silver Dollar Raceway. With 44 cars signed in, qualifying was divided into two flights. Motter Motorsports’ driver Joey Saldana was in the second flight and blistered the quarter-mile high bank oval in 11.958 seconds. The driver of the Motter Equipment HE&M Saw Beltline Body Shop 71M Sprint Car was quickest in the second flight and quickest overall, racking up his 16th quick time of the season. He also held the distinction of being the only pilot in the 11-second category. Saldana, the current track record holder (10.918 seconds set in 2009), did a masterful job negotiating the rough, choppy race track terrain.

COTTAGE GROVE, Oregon (Sept. 9, 2015) – It was a ‘hump day’ stop for the World of Outlaws tonight at Cottage Grove Speedway as they worked their way through the West Coast swing.

Joey Saldana set the track record at this track in 2007 and he left continuing to hold that record. Once again tonight, Saldana and the Motter Equipment HE&M Saw Beltline Body Shop 71M were dialed in for time trials. The Brownsburg Bullet chalked up the No. 2 qualifying spot with a 10.065-second lap around the quarter-mile high banked oval.

INDIANAPOLIS (Sept. 9, 2015) – Eighteen years ago, Donny Schatz was a 21-year-old second-year World of Outlaws (WoO) Sprint Car Series racer chasing legends Steve Kinser and Sammy Swindell around a quarter-mile dirt oval in western central Oregon. It was a night he will always remember because racing with the Outlaws was his dream and, on that particular August night back in 1998, he drove past them to win his first career WoO A-Feature. Monday night at Grays Harbor Raceway in Elma, Washington, Schatz accomplished something he never dreamed of. Schatz was first to the checkers again and joined the two legends as the only drivers in the series’ 38-year history to win 200 WoO A-Feature events.

“I never thought I could dream big enough to be part of this sport’s history,” Schatz said following his 200th career WoO A-Feature victory. “This is unbelievable. I’ve been blessed to be around great people my whole life. My family has supported me wholeheartedly to this point and these guys I get to race with are awesome. Without their hard work, and all the guys who ever worked for me, there’s no way I would have ever gotten this far.”

“Qualifying is everything,” he said. “We were just barely out of the inversion both nights. That puts you behind every time.”

Sides then finished where he started – fifth – in a heat race both nights to lock into the main event. However, both tracks were extremely rough and Sides decided not to push the issue.

The remarkable results for Tony Stewart/Curb-Agajanian Racing (TSR) driver Donny Schatz and the TSR Bad Boy Buggies/Chevrolet Performance team continued north of the border this weekend during the ninth annual Oil City Cup at Castrol Raceway in Edmonton, Alberta. Schatz, the six-time and reigning World of Outlaws (WoO) Sprint Car Series champion, displayed both patience and perseverance in winning Friday’s 30-lap A-Feature and charging from the back of the pack to finish second in Saturday’s 30-lap A-Feature. The finishes increased his streak of finishes inside the top-three in WoO points races to 25.