LAWRENCEBURG, Ind. (Oct. 13, 2015) –With the final weeks of the World of Outlaws Sprint Car season winding down there is one event on the calendar this week at Lawrenceburg Speedway, Friday, Oct. 16. Originally scheduled for May 25, rain forced postponement of the event to this Friday.

The ‘burg is pure Americana, pure bullring steeped in history. Back in the 1960s when USAC midgets raced at Lawrenceburg, legendary drivers like A.J. Foyt and Johnny Rutherford were standing on the gas and pitching them sideways. 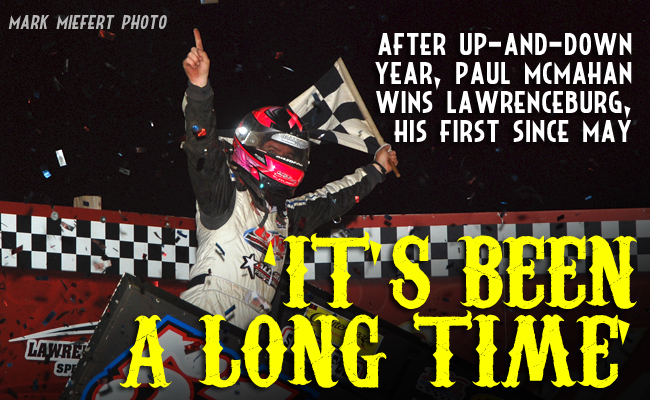 LAWRENCEBURG, Ind. – Oct. 16, 2015 – From the peak of spring where things seemed to be coming together to the desolation of a frustrating summer, Paul McMahan was a driver relieved Friday night at Lawrenceburg Speedway after he scored his first World of Outlaws Sprint Car Series victory in more than five months.

“It’s been a long time,” an emotional McMahan said as he walked to his victory lane interview. “Man, this has been a hell of an up-and-down year for me all year long. We’re not accustomed to be running where we’ve been running. This is where we’re accustomed to running.”

With his father and son in attendance, the CJB Motorsports driver took the quick time earlier in the night, his second in a row and sixth on the season.

Christopher Bell and Shane Stewart led the field to the green flag in the 35-lap feature which had been postponed to tonight following a rain out in May. Stewart jumped to an early lead in his No. 2 GoPro/Eneos/KickIt car as McMahan quickly moved into fourth from a fifth-place starting position.

LAWRENCEBURG, Ind. – Oct. 16, 2015 – Paul McMahan powered past Shane Stewart Friday night at Lawrenceburg Speedway to score his third World of Outlaws Sprint Car Series victory of the season. A late-charging Donny Schatz battled from 12th place to finish in the final spot on the podium in third. 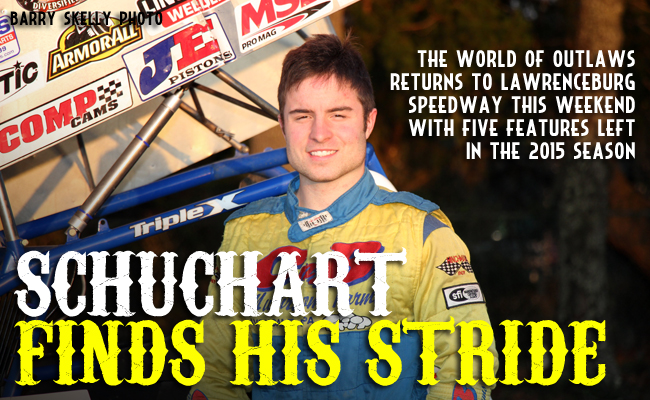 At A Glance: Logan Schuchart Finishing Up 2015 On A Roll

The 22-year-old, Hanover, Pennsylvania native, now in his sophomore year with the series, said he has learned a lot in the last year, building confidence as a driver and progressing along with his Shark Racing team.

Schatz and TSR’s Bad Boy Buggies/Chevrolet Performance team are in the midst of an incredible season and Saturday night’s triumph tied the team with Steve Kinser’s 1992 campaign for third-most single-season wins in series history. The victory also continued his mastery of the state of New York this season. Schatz has been victorious in each of the Outlaws’ three stops in New York this season – Weedsport Speedway in May, Lebanon Valley Raceway in July and Saturday’s annual stop at Rolling Wheels.

“We’ve had a great season and I’m really proud to be part of such an incredible team,” said Schatz, who clinched his seventh WoO championship last week. “Tony Stewart, Bad Boy Buggies, Chevrolet Performance – they are the ones who make it possible for us to come out here and race. I’m surrounded by great people – Rick Warner, Steve Swenson, and Eric Prutzman – doing an awesome job with the car. They make the decisions. They’re learning things right now and that’s really encouraging for the guy driving it, that’s for sure.”

ELBRIDGE, N.Y. (Oct. 10, 2015) – The race at Rolling Wheels Raceway Park was the lone event on the World of Outlaws schedule this week.

Joey Saldana was the first in a succession of drivers to break the 14-year track record at Rolling Wheels tonight during qualifying. Ultimately Saldana and the Motter Equipment HE&M Saw Beltline Body Shop 71M settled in the No. 7 qualifying spot with a lap of 15.805 seconds. The driver who was credited ultimately with the track record was Paul McMahan logging a 15.461-second lap at 145.527 miles per hour, officially making Rolling Wheels the fastest dirt track in the world and that speed the fastest ever turned by a sprint car at any dirt track. The previous record for the fastest track was 143.209 mph at Volusia Speedway.

INDIANAPOLIS (Oct. 9, 2015) – The numbers say it’s official, but the only certainty for Tony Stewart-Curb Agajanian Racing (TSR) driver Donny Schatz is that there are still six opportunities remaining in the 2015 World of Outlaws (WoO) Sprint Car Series season. Mathematically, Schatz, the driver of the TSR No. 15 Bad Boy Buggies/Chevrolet Performance J&J, has clinched his seventh WoO championship on the strength of the monster season he and his TSR team are having that has included 30 victories in the season’s first 70 races. But the six-time and reigning WoO champion admits that there is still plenty to accomplish before the season celebration can commence.

This weekend, Schatz leads the Outlaw brigade back to Central New York for its annual race at Rolling Wheels Raceway Park in Elbridge, New York. The October stop has become a Saturday staple during Super DIRT Week festivities the last six years and Schatz has enjoyed the Outlaws being added to the card. For the first 12 of his 19 seasons with “The Greatest Show on Dirt,” Schatz ventured to the sprawling 5/8-mile dirt oval early in the summer and picked up wins in 2004 and 2006. Since the event has been moved to later in the year, Schatz has finished in the top-two four times, including wins the last two Octobers.

The sole focus heading into the weekend for Tony Stewart/Curb-Agajanian Racing (TSR) driver Donny Schatz and the Bad Boy Buggies/Chevrolet Performance team was winning the 53rd annual Champion Oil National Open at Williams Grove Speedway in Mechanicsburg, Pennsylvania. Schatz was looking to add to his incredible 2015 World of Outlaws (WoO) Sprint Car Series campaign stats in what was originally scheduled to be three nights of racing at the famed half-mile dirt oval. Mother Nature forced the program to be reduced to a single night of action Sunday evening, which mathematically locked up a seventh WoO championship for Schatz.

The driver of the TSR No. 15 Bad Boy Buggies/Chevrolet Performance J&J was informed that he and his team had clinched the championship, contingent upon them signing in prior to qualifying at each of the final six races, but the 19-year WoO veteran was only concerned with the opportunity of capturing a sixth National Open victory. After waiting almost four days to hit the track, Schatz did everything he could in his quest for victory number 31 on the season, but he wasn’t able to catch Stevie Smith during the final laps and finished second for the 16th time this season. 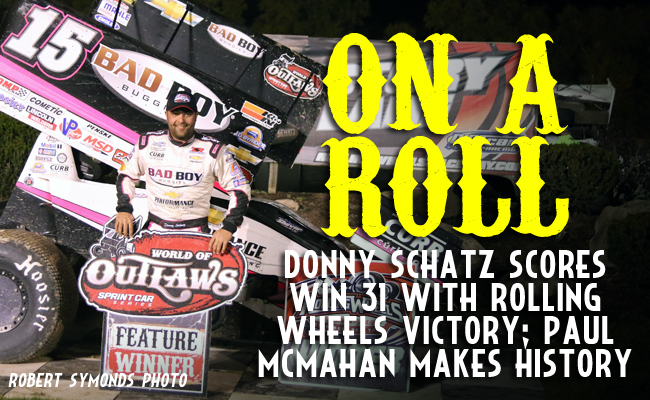 ELBRIDGE, N.Y. – Oct. 10, 2015 – Donny Schatz cruised to his 31st World of Outlaws Sprint Car Series victory of the season Saturday night as he battled through cautions and past David Gravel at Rolling Wheels Raceway Park.

“On the start there, David set a really good pace,” Schatz said. “Once we got to traffic, my car would move around, you could change your line a little bit. And then the track definitely changed a bunch. That’s what it needed for us to win and we were just glad to get the win tonight.”

The win ties Schatz with Steve Kinser for the third-most single season wins in series history. Kinser achieved the feat in 1992 – that was also the last time any driver won 30 or more races in a single season. Kinser won 36 series features in 1991 and 46, the most ever won in a single season, in 1987.