MECHANICSBURG, Pa. (July 23, 2015) – The World of Outlaws Sprint Car Series schedule heats up with four races in five days beginning with the two-day Summer Nationals July 24-25 that pits the Pennsylvania Posse against the Outlaws drivers.

Read moreFour Races in Five Days for World of Outlaws

SARVER, Pa. (July 21, 2015) – Up next in the continuing month of money was the Don Martin Memorial Silver Cup at Lernerville Speedway, a uniquely formatted doubleheader in which the first 30 lap event was run in traditional World of Outlaws fashion and then the field was inverted for a final 30-lap event in which no points were at stake. No one in the history of the event has won both in the same night.

To add another degree of difficulty to tonight’s event, the Outlaws were back in Pennsylvania Posse territory facing tough competition. 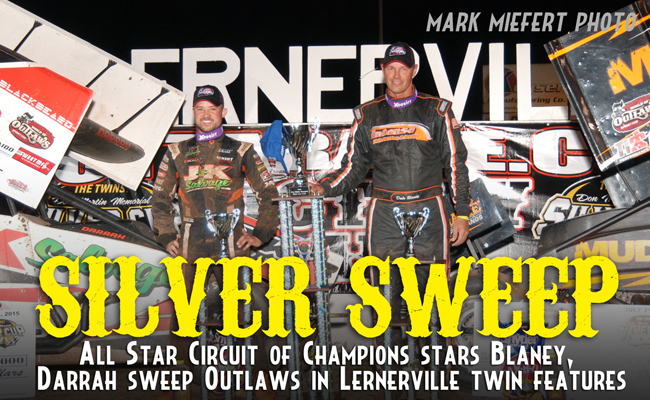 SARVER, Pa. – July 21, 2015 – Dale Blaney and Cody Darrah both represent the face of overcoming adversity, finding success after a year that began with uncertainty about the future.

If they had not done so already though, the All Star Circuit of Champions stars proved Tuesday night that all of that is old news as they swept the Don Martin Memorial Silver Cup Twins at Lernerville Speedway and beat the stars of the World of Outlaws Sprint Car Series.

Blaney picked up both the first feature win of the night and ultimately the coveted Silver Cup trophy and $5,000 bonus – his first career Silver Cup win.

SARVER, Pa. – July 21, 2015 – It was an All Star sweep of the Don Martion Memorial Silver Cup Twins at Lernerville Speedway on Tuesday night as Dale Blaney and Cody Darrah stood in victory lane. Blaney charged from mid-pack and won the first feature after holding off Donny Schatz. Darrah won the second feature holding off a late charging Greg Hodnett. Blaney took the overall Silver Cup win, claiming the $5,000 bonus.

At A Glance: Brent Marks Heads Back to Pennsylvania with the Outlaws

The World of Outlaws Sprint Car Series heads to Lernerville Speedway, Williams Grove Speedway and then on to New York’s Lebanon Valley Speedway

CONCORD, N.C. – July 20, 2015 – The World of Outlaws Sprint Car Series returns to Pennsylvania this week to take on the Don Martin Memorial Silver Cup Twins at Lernerville Speedway and the Summer Nationals at Williams Grove Speedway.

For 24-year-old Brent Marks, a Myerstown, Pennsylvania native, the opportunity to run a select schedule with the series has been a valuable learning experience for him and his No. 19M BAPS Auto Paint & Supplies team.

Read moreAt A Glance: The Outlaws Back To PA

ROSSBURG, Ohio – July 18, 2015 – Neither rain nor Donny Schatz could keep Shane Stewart down on Saturday night as the Larson Marks Racing driver scored the biggest win of his career and was crowned ‘King Shane’ in a Kings Royal no one will soon forget.

“This is an awesome, awesome weekend,” Stewart said in victory lane. “I don’t even know what to say, it’s an unbelievable feeling.”

Mother Nature wreaked havoc early on as the skies opened up on Eldora Speedway just after the first Heat race of the night got underway. The rain persisted off and on for the next two hours and with track work, pushed the rain delay past four hours. By the time the track was back in racing condition, it was just past 1 a.m. Sunday morning.

ROSSBURG, Ohio – July 18, 2015 – The 32nd Annual Kings Royal at Eldora Speedway kicked off after a more than four hour delay for rain and Donny Schatz looked poised to become the first repeat winner of the event in seven seasons but it was not to be. With Shane Stewart charging forward, Schatz’s car sputtered with five to go and he lost the lead to Stewart. It was Stewart who claimed the title of King Shane the 32nd. Jason Johnson finished the night in second with Rico Abreu in third. 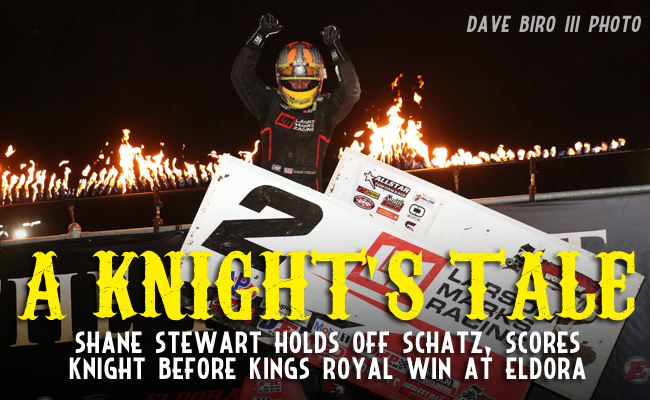 Shane Stewart Gets His Knight’s Tale at Eldora Speedway

ROSSBURG, Ohio – July 17, 2015 – In spite a qualifying draw that sent him out last, there was little doubt Shane Stewart was the driver to beat at Friday night’s Knight Before the Kings Royal at Eldora Speedway.

After qualifying third, Stewart won the Dash and started on the feature pole. Through two attempts to get the race started, Stewart built healthy leads on his nearest competitor. Sammy Swindell worked to catch the Larson Marks Racing driver as they fought their way through traffic but was never able to get much closer than a couple of car lengths.

ROSSBURG, Ohio – July 17, 2015 – Shane Stewart dominated the Knight Before the Kings Royal, jumping to the lead early and then outpacing Sammy Swindell and Donny Schatz down the stretch. It was the fifth World of Outlaws Sprint Car Series victory of the season for Stewart. Schatz and Pittman finished on the podium in second and third. 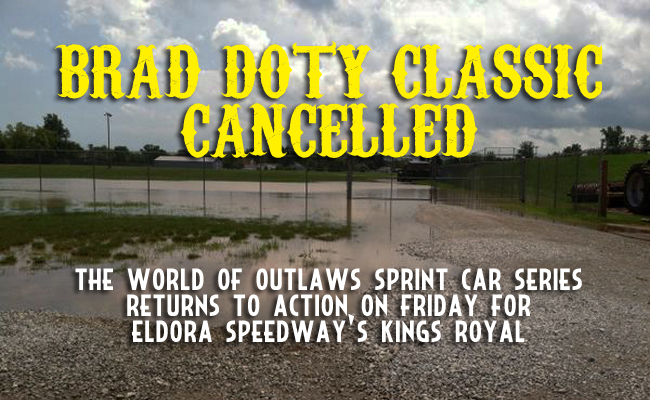 With the property already saturated from over four inches of rain though Monday and another inch on Tuesday afternoon and evening, there is not enough time for the facility to dry out and be prepared.