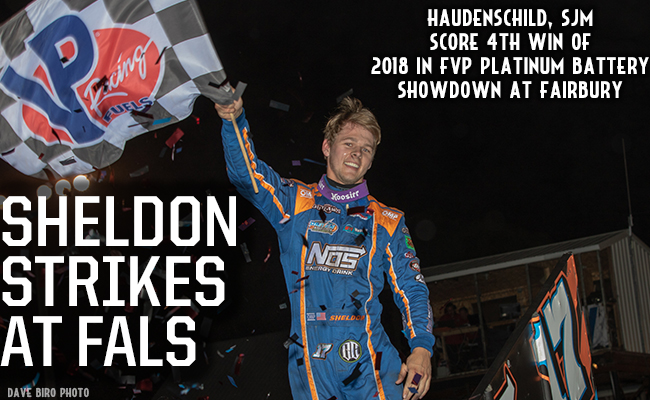 FAIRBURY, IL – June 5, 2018 – Sheldon Haudenschild took the lead on a Lap 3 restart and never looked back, scoring his fourth World of Outlaws Craftsman Sprint Car Series victory of the season in the Series inaugural visit to Fairbury American Legion Speedway in the FVP Platinum Battery Showdown. Jacob Allen matched his career-best with a runner-up finish with Kyle Larson completing the podium.

The night didn’t start off as planned for Haudenschild, as Sheldon was just 21st quick in Qualifying and started seventh in his Heat. Haudenschild, in true Haudenschild fashion, charged from seventh to second in his Heat to secure a spot in the Sears Craftsman Dash.

Sheldon Haudenschild went on to win the Dash, earning the pole for the 40-lap Feature but it was fellow front row starter Hunter Schuerenburg getting the jump at the drop of the Green. Schuerenburg, in search of his first career Outlaw triumph, paced the field, pounding the cushion before a caution on Lap 3 for a backwards Shane Stewart halted action.

Schuerenburg elected the top on the double-file restart, but his No.20 machine stumbled on the restart as Haudenschild, who restarted alongside him, powered to the lead. Schuerenburg drastically fell to the back of the field with a flat tire. Things went from bad to worse as Tanner Thorson jumped Schuerenburg’s rear tire and went for a tumble. Thorson was uninjured in the accident and the Red Flag allowed Schuerenburg to change his tire and restart at the rear of the field.

When action resumed, Haudenschild motored away from the field and reached lapped traffic quickly around the bullring. Jacob Allen, who shattered the FALS track record in Qualifying, moved into second with his Shark Racing teammate, Logan Schuchart in tow running third. Haudenschild put on a lapped traffic clinic, slicing and dicing his way through the field.

A hellacious battle between Kyle Larson and Brent Marks for fifth was momentarily halted when a lapped car got loose and forced both Larson and Marks to take evasive action with 17 laps remaining. The duo did synchronized 360’s, but kept going, in turn two, forcing the rest of the field to check up. Greg Wilson had nowhere to go and got upside down. Gio Scelzi and Paul Nienhiser’s top-ten runs also came to an end in the accident. Wilson was uninjured but done for the evening while both Scelzi and Nienhiser tagged the rear.

With rubber prominent on the high line, World of Outlaws officials ruled single-file restarts for the remainder of the evening. Haudenschild continued to show the way as he reached traffic with the rest of the field directly on his tail.

With eight laps remaining, Schuchart pulled a slider on his teammate Allen to secure second and set his sights on Haudenschild. Haudenschild remained locked down in the rubber as Schuchart looked for a way to steal the lead. Schuchart peeked a car-length higher than Haudenschild in turn two with three laps remaining, but that was the end of Schuchart’s night as a flat tire on the No.1S brought out the final caution of the evening.

Haudenschild distanced himself from Allen, who was in search of his first career Outlaw win, on the late restart while Larson and Cory Eliason waged war for third. The pair of Californian’s exchanged sliders back and forth with Larson grabbing the final podium spot.

Sheldon Haudenschild went on to win his fourth Feature of the year aboard the NOS Energy Drink sponsored Stenhouse Jr.-Marshall No.17.

“My car was really good early and really good in the rubber,” Haudenschild said with a smile in Victory Lane. “I was able to get good drive on the early restart, grab the lead and get to the top. Other than a couple of times where I tagged the wall, I felt really good and felt like I was making good laps in traffic,” the Wooster, OH native added.

Allen’s second-place finish tied a career-best and was his first top-ten finish of 2018. “My team has worked really hard. Sheldon’s been one of my best friends for a long time, obviously I would have liked to get my first Outlaw win, but I’m extremely happy with second,” Allen said. When asked about racing with his teammate and relative Schuchart, Allen explained, “We’ll race each other hard, but clean. We both want to win, it’s unfortunate he got a flat tire ending his night. It’s always fun running up front with Logan.”

Kyle Larson, who slipped out of the top ten early, was pleased to get back to the podium. “I was pretty good as the race went on. I’m really loose until the fuel burns off, I was happy to get back to third after our start,” Larson said. Cory Eliason settled for fourth with Saturday’s winner in Wisconsin Brent Marks coming from 14th to fifth. The finish was Marks’ third consecutive top-five finish. KSE Hard Charger honors went to David Gravel and CJB Motorsports, as they came from 22nd to complete the top ten.

The World of Outlaws Craftsman Sprint Car Series continues its 40th Anniversary Season this weekend with the 40th Annual AGCO Jackson Nationals. Saturday’s Feature at Jackson will pay a whopping $40,000 to win. If you can’t make it out to Jackson, MN be sure to watch every lap LIVE on DIRTVision.com!