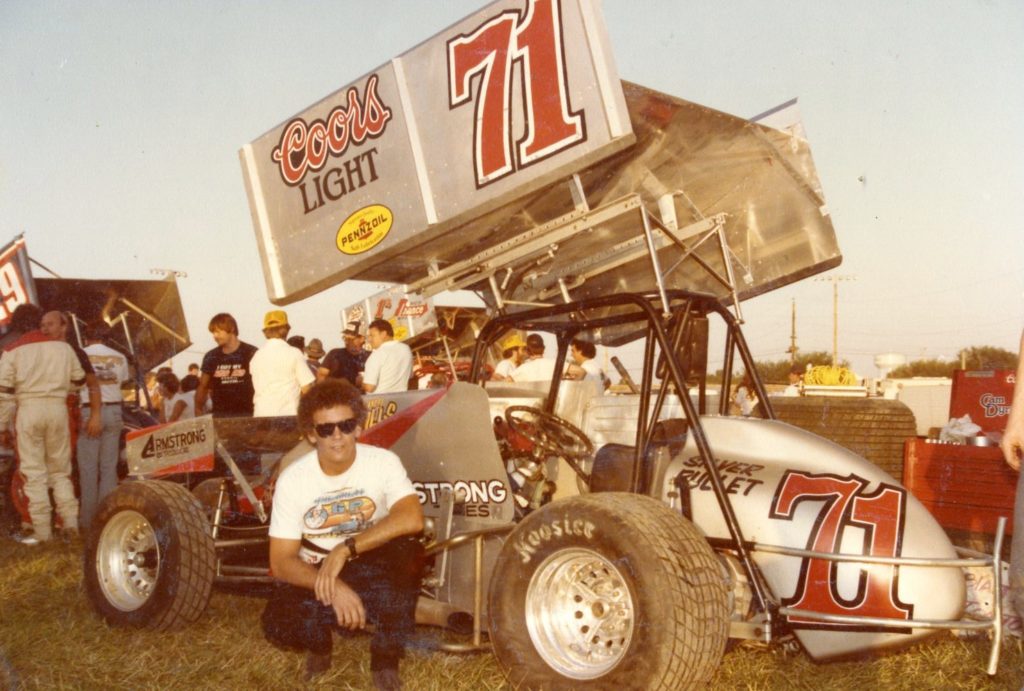 Auto racing has never seen a career quite like that authored by Jimmy Sills, co-author of the new autobiography “Life With Luke” with Dave Argabright. Sills was an outlaw before the World of Outlaws. He first diced among the Pennsylvania Posse in 1975. His first Knoxville Nationals was 1976. He did four Dirt Cups before The Outlaws annexed it. He won the biggest race in Australia when the World of Outlaws was mere concept then competed in the club’s second and third events ever.

Sills won 200 times in sprints, midgets and champ cars in 15 of our United States and three continents with and without wings on dirt and asphalt. Baylands Raceway Park existed for eight years (1981-88) when he routed sprints and midgets with alacrity. When that Fremont facility was flattened, 43 feature wins by Sills became its eternal standard.

Beating the World of Outlaws proved most elusive. Sills topped preliminaries to Gold Cup 1979 (when bushy hair earned his “Buckwheat” tag), Devil’s Bowl 1981, Baylands ‘81, Knoxville Nationals 1982, Gold Cup 1982 and Baylands ‘84. Jimmy did not officially whip The Outlaws until July 5, 1986 driving Cahill Challenger for Lenard McCarl in the Black Hills of South Dakota. That was when Jim ran 66 of 71 World of Outlaws races that tallied more points than all but three. In 1987, Sills and McCarl swapped Cahill 7x to Chuck Merrill 5m and matched that lone win on the Indy Mile on Indy 500 Pole Night.

Sills is a survivor. He came of age in an era when fathers did not fund their son’s motorsport dreams because, “You didn’t know if your driver was coming home.” He winced in the pay line at Belleville in 1976 when Doug Hjermstead’s widow cried aloud about what she should do next. Sills won the 1987 Dirt Cup that killed Dave Bradway Jr. In less than a year, he assumed Bradway’s ride: Tri-C Machine Shop Special of Clyde Lamar. Somebody had to. Law of the jungle. Three-C netted Jimmy’s third World of Outlaws win in the 1988 Mini Gold Cup.

Doug Wolfgang set the Weikert Livestock bar ridiculously high yet Sills signed on as successor at Doug’s behest. Those five months of 1988 encompassed the full spectrum from Selinsgrove profanity to Beer Hill plaudits when the Outlaws visited. Jimmy and Weikert hired Sonny Kratzer (he later toured with Selma Shell and Beef Packers) when they whipped the World of Outlaws at Rolling Wheels and All Stars across seven nights of Ohio Speed Week. Danell/DeHart Farms of Fresno fielded the last two wins on Jim’s World of Outlaws resume at Santa Maria and the 1989 Gold Cup prelim.

Gold Cup 1989 was Jimmy’s first after he “retired.” Sills seemed sincere. He had seen Brad Doty crippled by the 1988 Kings Royal when only a twist of fate kept Sills from that carnage. Marriage and fatherhood were failing. Maybe he needed to push Carrera shocks and Design 500 uniforms. John Bickford knew better. Jeff Gordon’s stepdad wagered Jim that he could not stay away and Svengali was right. Five months into 1989, BCRA Midgets at Chico were humbled by someone masquerading as “Luke Warmwater from Hot Springs, Arkansas.” When he won twice more in Chico Sprint Cars, Luke was unmasked as Jimmy Sills.

Premature retirement rejuvenated his career. Rather than 100 sprint starts per season, unencumbered Sills augmented three USAC Silver Crown championships with sprints, midgets and three Phoenix Copper Classics in Bryan Shafer’s supermodified. If he wanted a week to ride his Harley, he could do that too. Four times on his local Sacramento mile, Sills won the Golden State 100. Dirt Cup trophies swelled to five.

When the World of Outlaws began in 1978, Sills missed its Devil’s Bowl inaugural when Jerry Smith’s car was driven by Steve Kinser. Before the new club’s first two Eldora events, Steve was hired by Karl Kinser to replace Dick Gaines so Smith filled Steve’s vacancy with Sills. They remained a team through Knoxville Nationals when Jim jumped to Fred Aden to score second in Denver. Jan Flammer was his car owner for the 1979 Knoxville Nationals. McCray Plastering brought Sills to Texas in 1980 before he joined Ace Trucking of Des Moines for sixth at Nationals. Sills was also sixth at Gold Cup for John Lawson.

Ace was the place for Sills in 1981 beginning fourth at East Bay, first in Mesquite, third at Tulsa Fairgrounds, second at Hartford, and fourth in Winnipeg, Manitoba. Back home with the Bailey Brothers of Vallejo, he finished first at Baylands and second at Santa Maria. They opened 1982 third in Mesquite and second at Oklahoma City, scored sixth at Knoxville Nationals and fourth at Gold Cup. Sills finished fifth at the 1983 Knoxville Nationals for Missouri’s Merle Thomason then returned to Bailey Brothers for third at Baylands and seventh at Gold Cup. Two other brothers from Yuba City fielded the Coors Light Silver Bullet that Sills brought to the first Kings Royal and eighth at the 1984 Knoxville Nationals. One month later, Richard and Ron Lovell landed second with Sills at Gold Cup.

May 3, 1985 was significant. Hanford had granted Bickford’s request to allow 13-year old Jeff Gordon to hot lap the family Sprint Car partly because Jimmy Sills said they should. Jim followed Jeff until satisfied, broke the track record, then flipped. As he hung upside-down, Les Kepler inquired if Sills might like to drive for him since Lovell’s car resembled a crushed can of Coors Light. They clicked instantly.

Fred Marks and Les Kepler came to Sprint Cars with a big splash. They had made money building homes around Pismo Beach, survived a plane crash in Mexico, and decided to go racing. It seemed so easy when Sills won at Chico, Baylands, Dirt Cup (10.5k) and first trip to Knoxville. Against the World of Outlaws, they were second in Chicago and Placerville. Fred and Les wanted to do the whole World of Outlaws tour and so did Sills, who placed Marks and Kepler fifth at Granite City and fourth at Weedsport before joining Lenard McCarl. Jim and Lenard peaked first in Rapid City and second at Lincoln but backed into the first turn fence at Knoxville Nationals and knocked Sills cold. They rebounded third at Baylands, Santa Maria and Gold Cup then closed the 1986 WoO season fifth at Ascot Park.

Merrill Contracting was the owner of record in 1987 when Sills and McCarl scorched the Indy Mile. But they never saw Top Five again and disbanded by summer. Jimmy was reluctant to seize his brother-in-law Tim Green’s ride while Tim healed third-degree burns but at Green’s insistence, Sills joined Virgil Owen. They finished fifth at Knoxville Nationals, fourth at Hanford and San Jose, second at Gold Cup and third at Western World in Phoenix.

Sills started the 1988 World of Outlaws campaign for Lamar, landing the Mini Gold Cup. Clyde’s car remained home so Jim did two weeks with Daryl Saucier then phoned Weikert. They won immediately at Williams Grove then met The Outlaws fourth at Eldora, third at Lernerville, second at Hagerstown and first at Rolling Wheels. Red Lambeth Construction hired Jim for second at Baylands. Sills steered Dan Danell’s car to World of Outlaws wins at Santa Maria and Chico then opened the 1990 World of Outlaws campaign fourth for Danell at Mini Gold Cup.

David Calderwood of Bakersfield and Bob Consani of Santa Rosa became special car owners to Sills because they could field sprints (410 or 360), midgets and champ cars for asphalt or dirt. Both raced with Sills as often as possible. Dave and Jim claimed seventh in the 1991 World of Outlaws opener at Yuma. Sills and Consani captured eighth at Mini Gold Cup. In an encore performance for Weikert Livestock, Sills took third at Granite City and made his last final to the ‘91 Knoxville Nationals.

Bob Hampshire and Sills opened the 1992 World of Outlaws season in Suncoast Dome and on Charlotte County pavement but were woefully slow. Best that Jimmy could do against Outlaws in ‘92 was tenth at Placerville for Rod Tiner and eleventh at Hales Corners for Roger Henderson. Don Berry took Sills to the 1993 Knoxville Nationals. Labor Day at Calistoga reunited Sills and Kratzer on Dave Helm’s car that reached second-place. Berry was boss for 1994-95 World of Outlaws races that finished fifth at San Jose and seventh in Bakersfield.

“Life With Luke: And Other Exciting Racing Adventures” is as riveting as any Argabright book. And this I would state even if Page Three did not thank me for the map of Jimmy’s chaotic career. Of all Argabright subjects, Sills may have the sharpest sense of humor. “Ninety percent of fights involve a woman” was just one great line. Jimmy Sills did it all. The book proves it.