Skip to content
World of Outlaws to Return to BMP Speedway in Billings in 2018 on August 25
Tags: Big Sky Speedway 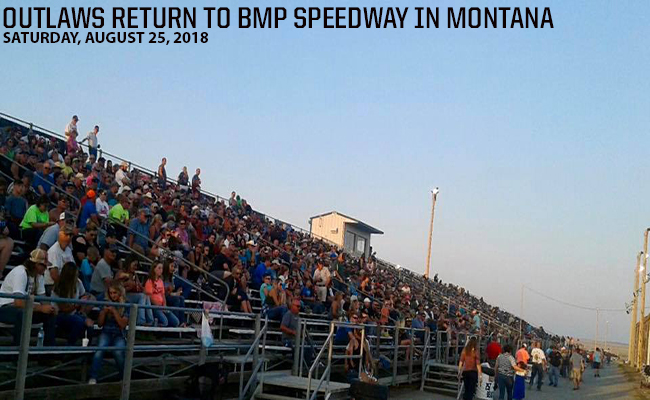 BILLINGS, MT. — November 30, 2017 —The Big Sky Brawl for the World of Outlaws Craftsman Sprint Car Series will hit the track for the second consecutive year at BMP Speedway in Billings, Mont., on Saturday, August 25, 2018.

Last season, the Outlaws returned to the three-eighths-mile for the first time since 2008, with Daryn Pittman picking up the win. Making the victory even more special was the fact that his team owner, NASCAR driver Kasey Kahne was in attendance, watching the pair of World of Outlaws Craftsman Sprint Car Series teams he owns compete. For Pittman it was his second win at BMP Speedway to go along with a victory in 2005.

The 2017 campaign was another historic one for the World of Outlaws Craftsman Sprint Car Series as 20 drivers picked up wins. Leading the way was Donny Schatz, who scored his ninth series championship and became the first driver in series history to win 20 or more A-Feature events in five consecutive seasons. David Gravel had a career-year, earning 18 A-Feature wins, second only to Schatz. Gravel finished third in points for the second consecutive year.

Brad Sweet was nearly as consistent as Schatz, picking up 72 top-10 finishes just two less than the champion, with 56 of those being top-fives. Sweet visited victory lane five times in 2017 en route to finishing a career-best second in points. Pittman ended up fourth in the standings, while picking up three wins, with Shane Stewart, who reached victory lane eight times, rounding out the top-five in points.

Jason Johnson, who won four races finished sixth in points, followed by Kevin Gobrecht Rookie of the Year Award winner Sheldon Haudenschild in seventh. Kraig Kinser, who had a win was eighth, with Logan Schuchart who earned a career-high four victories, in ninth and rookie Brent Marks rounded out the top-10.

Information on tickets for the Big Sky Brawl, featuring the World of Outlaws Craftsman Sprint Car Series at BMP Speedway in Billings, Montana on Saturday, August 25, 2018 will be available soon at www.slspromotions.com.