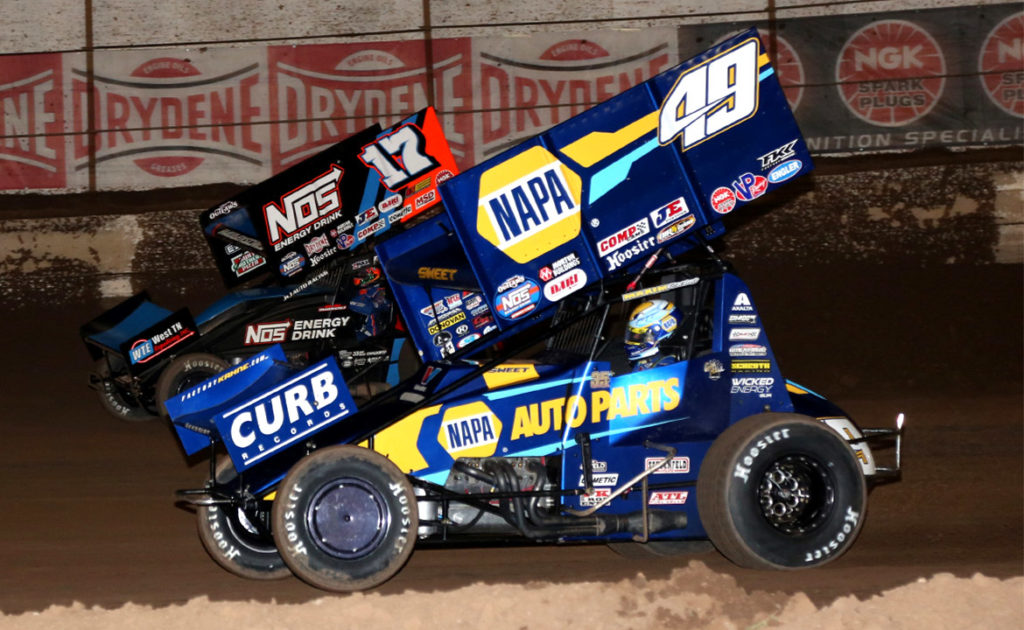 The World of Outlaws NOS Energy Drink Sprint Car Series will make history Memorial Day weekend, hosting the inaugural doubleheader Patriot Nationals at The Dirt Track at Charlotte on Friday, May 24, and Saturday, May 25.

The event will be one of the most prestigious two-days of racing on the World of Outlaws’ schedule with the Feature paying $15,000-to-win and $1,000 to start both nights.

This is the first year since 2002 that there have been two May races at the 4/10-mile speedway and drivers are excited about the doubleheader opportunity.

“Charlotte has been a great race track,” Kasey Kahne Racing driver, Brad Sweet said. “It’s a great facility. It’s been longing to turn into a two-day race. We’ve had great crowds in May for the one-day show. Really looking forward to that turning into more on an event.”

The Charlotte track has always but on a thrilling show, showing why the Series is The Greatest Show on Dirt.

Shane Stewart led most of the way during the single May race last year, but hot on his tail were 10-time Series champion Donny Schatz and Sweet. The No. 49 car of Sweet put on a show for fans, racing hard with Schatz, Sheldon Haudenschild and Logan Schuchart throughout the night.

Schatz went on to claim the win, with Stewart second and Sweet settling for third, but they made it a riveting show for the fans to the finish.

Sweet and Schatz have been evenly matched, so far, this season. Both have two wins and have been trading the points lead night after night. Neither are letting the other driver run away with the championship this year.

But close behind them are David Gravel and Daryn Pittman. The two drivers have started to put together consistent top-five finishes, propelling them into the championship battle.

There will be several races and storylines to follow throughout the two nights.

Racing will begin around 8 p.m. Friday and Saturday with grandstand gates opening at 5 p.m.

Following the Series’ return to The Dirt Track at Charlotte, the World of Outlaws on Monday, May 27, will venture next to Lawrenceburg Speedway in Lawrenceburg, Ind. for the Memorial Day Spectacular presented by KOI Auto Parts.