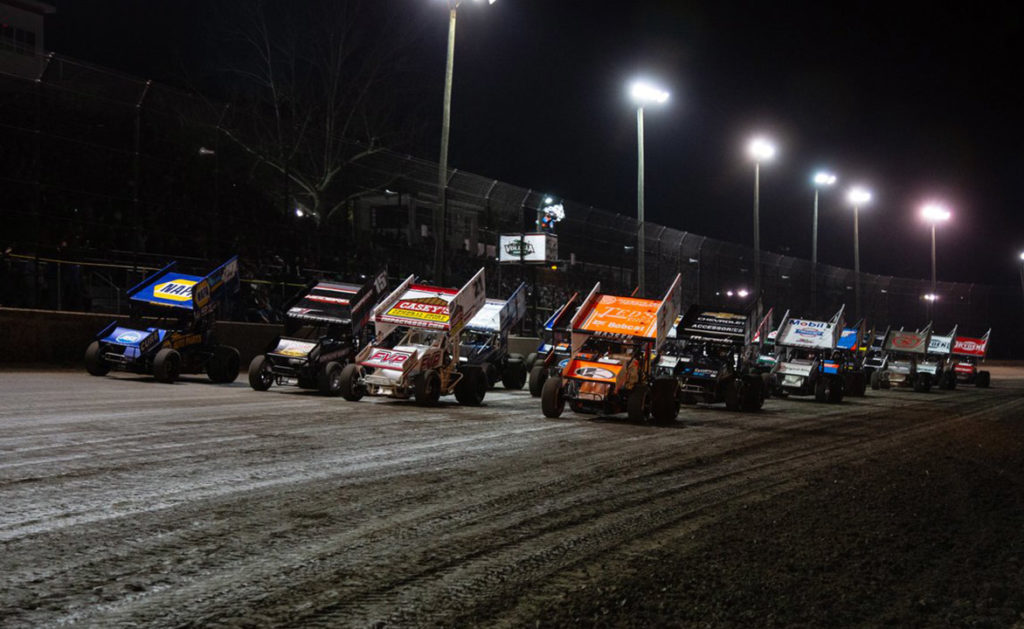 While Sprint Cars didn’t grace Volusia Speedway Park until 1981, they had a key role in the growth of the Florida track and a strong presence during the 50 years of the DIRTcar Nationals.

The speedway started life as a sandy quarter-mile track in Barberville, FL, before Benny Corbin, a Sprint Car driver with a love for dirt racing, saw the potential for something greater.

Corbin, a Korean War veteran who became known as “the father of short-track racing in Volusia County,” purchased the property in 1968 and birthed Barberville Speedway. The track went through multiple transformations under his ownership from 1968 to 1982, including the track’s expansion to its current half-mile configuration. And over time its name went from Barberville Speedway to Volusia County Speedway and then to its current title Volusia Speedway Park.

His passion for the sport led to the creation of big events like the DIRTcar Nationals and his love for Sprint Cars made it inevitable the open-wheel machines would eventually turn laps around his track.

That became a reality for the first time on Feb. 9, 1981, when the World of Outlaws became the first series to bring Sprint Cars to Volusia. Doug Wolfgang conquered the event, holding off “The King” Steve Kinser for the win.

The Series didn’t return to Volusia until 2005 after that, but Sprint Car racing stayed vibrant with the All Star Circuit of Champions making its debut in 1983. The regional touring Series ran at the speedway from 1983 to 1991 before taking a three-year break.

In the All Star’s first decade, Kenny Jacobs won the first event at the track on Feb. 15, 1983, and claimed another in 1989. Steve Kinser won his first race at the speedway in 1984 and Wolfgang became the first repeat winner at the track in 1987.

Jacobs, Bobby Davis, Jr. and 2001 World of Outlaws champion Danny Lasoski won twice at the track during that period – the start to Lasoski’s Florida dominance.

The All Stars returned to the track in 1995 and ran there until 2003 before taking another year off. Dave Blaney, who won the World of Outlaws championship in 1995, won the first race back. Lasoski continued his winning ways, claiming two victories there with the All Stars that year, as well.

In the All Star’s 37 events at Volusia between 1995 and 2003, Lasoski won 12 of them. That time period also saw drivers such as Jac Haudenschild, Joey Saldana, Craig Dollansky, Lance Dewease, Kasey Kahne and Jason Johnson pick up their first win at the track.

Sprint Car racing returned to the track in full force in 2005 with the World of Outlaws and All Stars competing at the Florida venue during the same week, as they’ll continue to do so in February. The All Stars were absent in 2013, but the World of Outlaws have competed at Volusia Speedway Park every year since their return in 2005.

Lasoski won five races at the track in that 16-year period and racked up 19 wins in total – between the All Stars and World of Outlaws. In 2000, while driving for Tony Stewart, Lasoski won all four events at Volusia in a unique chassis designed by Jerry Russell, from Eagle Chassis, and himself, which was outlawed after that week due to its radical design.

“That place just fit me for some reason,” Lasoski said about Volusia Speedway Park. “Even when it was locked down it was really good and when it slicked off you had to be really technical. It’s probably one of my favorite three tracks in America.

“Just racing there, in general, was fun. From the ‘90s up until now, obviously, the track prep now is so superior than what it used to be because of the equipment, but even back in the day they would give us a top and a bottom and we’d put on a great show every year we went down there.”

For many years, DIRTcar Nationals winners were awarded a golden eagle, but the Florida event took on a new life when the trophy switch to a golden gator in 2012, and the DIRTcar Nationals champion was award the “Big Gator” trophy. Since then, the Sprint Car Big Gator champions have included:

“For whatever reason, it’s definitely one of my best tracks,” said Sweet, who has seven wins in total at Volusia. “We’ve definitely struggled there in the past here and there. I think it says a lot about our guys and our race team that they bring a really fast car there every year. It’s the first week of the season and you can see the teams that haven’t meshed yet or aren’t as well prepared and the teams that have been together are going to come out of the box a little stronger. That’s going to give us an advantage. And for whatever reason, it’s been a good racetrack for me.”

For the 50th DIRTcar Nationals in 2021, the All Star Circuit of Champions will run on Feb. 3-4 and the World of Outlaws NOS Energy Drink Sprint Car Series will run Feb. 5-7.

The half-mile track has produced thrilling races each year and set the stage for epic championship battles. Schatz, Sweet and Logan Schuchart won the three season-opening races for the World of Outlaws during the 2020 DIRTcar Nationals and ended the season as the top three drivers in points.

While the Sprint Cars didn’t grace Volusia Speedway Park until 1981, they’ve continued to be one of the most exciting parts of the DIRTcar Nationals every year since.