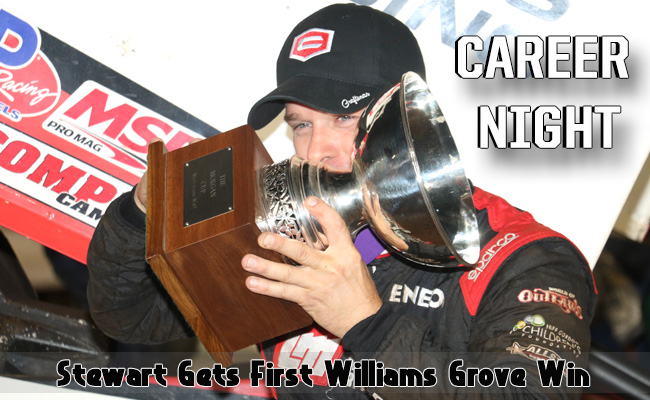 Shane Stewart started on the pole for the World of Outlaws Craftsman® Sprint Car Series Morgan Cup at Williams Grove Speedway, but didn’t lead the opening lap. Instead, he battled with PA Posse driver TJ Stutts of Liverpool, PA and used a slide job in turns one and two to take the lead on a lap 11 restart. From there, Stewart held off Stutts and then Daryn Pittman on a pair of restarts over the final 10 laps to earn his first career Williams Grove win and his first Outlaw victory of the 2017 season.

“You don’t even know what it means to me to finally get here in Victory Lane,” Stewart said in Victory Lane. “I know the East Coast isn’t always kind to me, but I am very happy and going to cherish this win.”

Stewart earned the pole after winning the Craftsman Club Dash and led the field to the green flag with Stutts on the outside of the front row. It was Stutts who grabbed the lead by the time the two drivers had raced turn three. The top two quickly broke away from a third-place battle between Outlaw rookie Sheldon Haudenschild and Tim Shaffer of Aliquippa, PA. Shaffer took the spot on lap seven when Haudenschild spun at the bottom of turn one, but kept his foot in the gas and continued without incident despite losing five positions.

The battle for the lead gained momentum as Stewart closed on Stutts and on lap 10 moved to the outside lane to setup a pass. A lap later, Stewart appeared to have enough steam in the outside lane to take the lead, but Stutts led by 0.002 seconds at the line, just as the first caution of the race waved when Haudenschild spun to a stop at the top of turn three.

On the restart, Stewart made the race-winning move when he dove to the bottom of the track and slid in front of Stutts to drive off turn two with the lead.

“I didn’t get a break on the initial start of the Feature and I told myself that if TJ took the bottom, I actually thought the top was going to be better,” Stewart said. “It just worked out really well for us. Man, clean air makes everything and makes a big difference.”

Stewart ran the rest of the race in clean air as the top pairing never had the chance to wade into lapped traffic. The second caution of the race waved at lap 15 when Brent Marks and Brian Montieth made contact and tangled together at the top of turn two, ending the night for both drivers.

Stewart kept the field at bay when the green waved and again on a lap 21 restart. Meanwhile, Pittman darted from eighth to fourth on the latter restart before jumping into second on the final restart with seven laps to go. He earned his second runner-up finish of the week, finishing 2.044 seconds behind Stewart’s Larson Marks Racing No.2.

“I had such a good car on restarts that every time we went green, my car had the right attitude,” Pittman said following the race. “Everybody seemed to be a little rolled up down there on the start in turns three and four and I could get by a couple guys every time.”

Stewart cruised over the final five laps on his way to the victory, which he celebrated in Victory Lane with his fiancée Jenn, daughter Nixon and the Larson Marks Racing crew.

“It means a lot to me,” Stewart said. “I know that the rivalry here is out of this world, which I appreciate. I love the enthusiasm and the Pennsylvania fans.”

The track was an interesting mix of tacky and dry slick throughout the night, conditions that were unusual for Williams Grove, Pittman said.

“I’ve seen this place about every which way that’s an option, but I don’t think I’ve ever seen it quite like it was tonight,” Pittman explained. “It was definitely different. I’ve never seen a wet strip a car length and a half off the bottom stay that long throughout the night. It was the dominant way around.”

During Pittman’s charge forward, Shaffer worked past Stutts to maintain the third spot and earn a third-place finish, equaling the best results of PA Posse drivers Danny Dietrich and Freddie Rahmer earlier in the week.

“Last night we missed it there at the beginning and it killed us,” Shaffer said, “but tonight we did the right things and put ourselves in position (to contend) and we’re on the front straightaway.”

Lance Dewease of Fayetteville, PA and Outlaw driver Logan Schuchart completed the top-five following a spirited battle for fourth in the closing laps.

Jason Johnson set quick time to start the night with a lap of 16.402 seconds, less than three-tenths of a second off the track record of 16.140 set by Brian Paulus on April 26, 2002. He was the 25th of 37 drivers to take time. Johnson followed with a heat race win. Dewease, Schuchart and Jason Sides were the other heat winners, while Marks won the Last Chance Showdown.

The Outlaws now travel north for the Empire State Challenge at Weedsport (NY) Speedway on Sunday, May 21. Fans who can’t make it to the track can watch live pay-per-view video coverage on DIRTvision.

For complete results from the Morgan Cup at Williams Grove Speedway, click here.