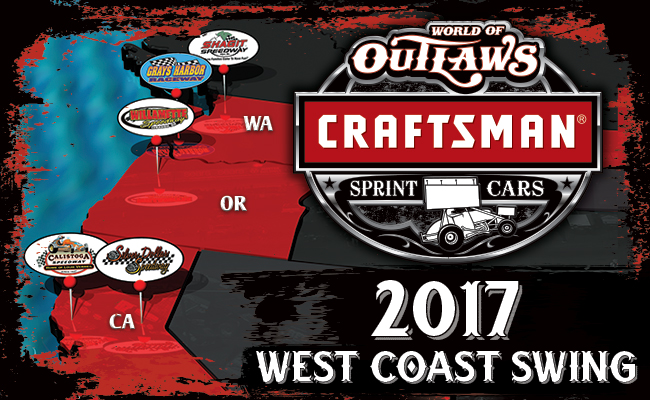 CONCORD, NC – August 17, 2017 –  After a grueling tour through the Midwest, the World of Outlaws Craftsman® Sprint Car Series returns to the West Coast for their annual fall swing, featuring races in Washington, Oregon and California.

The trip begins with the Outlaw Energy Showdown, a two-day event on the bullring at the Skagit Speedway. Last year, David Gravel and CJB Motorsports swept competition at the the high-banked3/8th mile that always provides elbows up racing. Other active World of Outlaws Craftsman Sprint Car Series drivers with wins at Skagit includes Shane Stewart (2015) and Donny Schatz, who has three wins to his credit.

From there, the Outlaws head to Grays Harbor Raceway in Elma, Washington. Eight-time and defending Series Champion Donny Schatz has won the last three races, although Mother Nature washed out competition last year.

The Series makes its lone appearance in the Beaver State on Wednesday, September 6, as the Outlaws stop at Willamette Speedway in Lebanon, Oregon for the fifth time ever. To purchase tickets for the race at Willamette please call 360-903-5785.

“The Greatest Show on Dirt” heads back to California for the second time this season for a battle with the tough locals at the Silver Dollar Speedway for the Gold Cup Race of Champions and the beautiful Calistoga Speedway for the Wine Country Outlaw Showdown.

Early this season, the Outlaws made their way to the West Coast for an extended road trip that consisted of stops in Nevada, California, and Arizona. During that time, Donny Schatz and David Gravel each picked up wins at Thunderbowl Raceway in Tulare, California. During the FVP Western Spring Shootout, California native and full-time Outlaw Brad Sweet picked up a win at Stockton Dirt Track. Gravel showed he was going to be a force to be reckon with in 2017 when he picked up his second and third wins of the season at Placerville and Perris Auto Speedway, respectively. Shark Racing’s Logan Schuchart was the last man standing at Keller Auto Speedway when he picked up his first win of the season with a last-lap pass.

After that first swing, the World of Outlaws Craftsman Sprint Car Series drivers will enter California a perfect 6-0 against the tough Golden State locals.

Carson Macedo, who scored an upset win over the World of Outlaws Craftsman Sprint Car Series at Silver Dollar Speedway in 2014, will be on hand to try to score a win for the local California drivers. “I won in 2014 with the Outlaws. It was one of the most incredible feelings I’ve ever had and by far my biggest win. I dreamed as a little kid to win an Outlaw race,” said the Lemoore, CA native.

When asked what it will take to pull off another victory Macedo said, “The Outlaws are the best in the World, so the only way to beat them is to be just as fast, without making any mistakes. I have a great team with Tarlton Racing and an awesome Crew Chief in Paul Baines. As a driver, I just have to minimize mistakes.”

Tickets for the Wine Country Outlaw Showdown at Calistoga Speedway can be purchased online or by calling 844-DIRT-TIX. See the schedule for information on other West Coast Swing events.

For those that can’t make it to the races out West, DIRTVision.com will have you covered with LIVE VIDEO from both Silver Dollar and Calistoga Speedway as Macedo and the rest of the California contingency try to steal a win from the World of Outlaws Craftsman Sprint Car Series drivers.