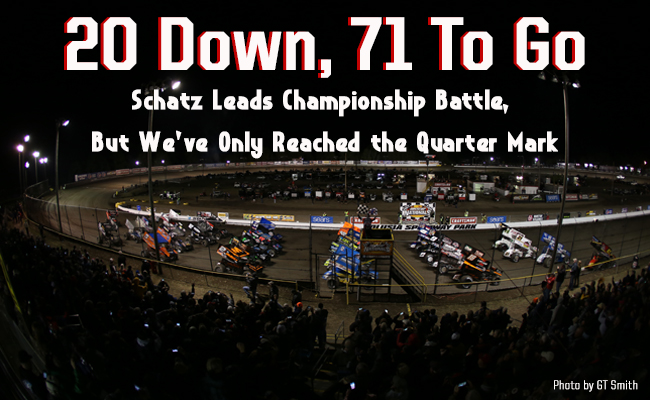 CONCORD, N.C. – May 11, 2017 – The World of Outlaws Craftsman® Sprint Car Series has reached the quarter-mark of its 2017 campaign following the completion of its 20th event last weekend at 81 Speedway in Park City, KS. The Series had scheduled 24 of its 93 nights of competition to this point on the calendar, but two were cancelled and another two postponed to later dates, all due to rain.

Through the first three months of competition, Donny Schatz is off to an impressive start in search of his ninth series title. After a pair of wins to start the month of May, the driver of the Tony Stewart/Curb-Agajanian Racing No.15 now has eight wins and a 60-point lead over the CJB Motorsports No.5 of David Gravel in the championship standings, a five-time winner himself this season. Both drivers have 17 top-10 finishes in 20 starts this season.

Kasey Kahne Racing teammates Brad Sweet and Daryn Pittman occupy the third- and fourth-place spots in the standings ahead of Jason Johnson’s No.41. Seven different drivers have earned wins so far this season, including Schatz, Gravel, Sweet and Johnson.

The Kevin Gobrecht Rookie-of-the-Year battle has already proved entertaining. Sheldon Haudenschild of Wooster, OH sits seventh overall in the Outlaw standings with an impressive five top-5s and 10 top-10s through 20 races. Haudenschild earned a World of Outlaws career-best finish of third at Lonestar Speedway in Texas on March 3 and equaled the mark at Perris Auto Speedway on April 1. Meanwhile, Brent Marks of Myerstown, PA is 12th in the Series standings with six top-5 results to date, including a season-best finish of sixth at Plymouth Speedway on April 28.

Here’s how we arrived at the quarter-mark.

After Johnson earned the season-opening win on February 17 during the DIRTcar Nationals at Volusia Speedway Park, Schatz replied with a pair of wins during a February 19 doubleheader. However, it was David Gravel who claimed the Big Gator as the week’s overall champion with a consistent effort all week long.

“It’s a long season, and you need to condition for it,” Johnson said following the opener to his third full-time season with the Outlaws. “[The win] is huge for our operation, for our team, for the people working on this team and for my self-confidence.”

From Florida, the Outlaws travelled west for a stop in Texas at Lonestar Speedway where Schatz extended his winning streak to three.

A week later, the Series was at the Las Vegas Dirt Track on March 9 and 10 for its only Nevada races of the season. Schatz topped the field on both nights for five straight wins. The pair of wins earned him a cool $10,000 bonus from Badlands Motor Speedway and make him eligible for another $5,000 bonus if he can win either race when the series visits the Brandon, SD track July 1-2, or $10,000 if he can win both.

“Ironically enough, we did win the last race there,” Schatz said of his 2016 Badlands victory following his second Vegas win. “I’ve always cut my teeth there back in the day. So, it’s fun to go there and get those victories. If we can get back there and do it again, it’ll be extra-special.”

The World of Outlaws annual spring trip through California is always one of the most trying parts of the season with teams spending nearly a month on the west coast, often with a week between races. But Cali was the coming out party for Gravel.

The Watertown, CT driver started the six-race California stretch with a win at Tulare Thunderbowl on March 17 to snap Schatz’ winning streak, although the reigning champ answered with his sixth win at the same track on the following night.

The ‘Big Cat’ Brad Sweet put himself in the win column a week later at Stockton Dirt Track on March 25 before Gravel earned his second triumph at Placerville Speedway on March 29. The final weekend in California yielded arguably the most popular win of the season when Logan Schuchart won at Keller Auto Speedway on March 31.

“It doesn’t matter if you start from the pole or wherever, if you can win an Outlaw race, these things are really tough [to win] no matter where you go,” Schuchart said following his victory.

Gravel scored his third win of the season the next night at Perris Auto Speedway to start the month of April on the right foot.

“[I’m] just happy to get another win, this is definitely huge,” Gravel said. “This the most wins I’ve had this early in the season. Not that it takes the pressure off, but you just want to keep it rolling.”

The Series began its return east with a trip through Arizona. Brian Brown became the first non-Series regular to score a victory at Cocopah Speedway on April 7. Rico Abreu joined him in that category the next night at Arizona Speedway on April 8.

A trio of races in the Lone Star State were up next for the Outlaws. Gravel went to victory lane for the fourth time during a rescheduled event at Gator Motorplex on April 13. The Outlaws returned to the site of their birth, Devil’s Bowl Speedway in Mesquite, TX for the Texas Outlaw Nationals on April 14 and 15. Johnson and Sweet each earned their second wins of the season on consecutive nights.

Moving to the Midwest

Following the pair of races at Devil’s Bowl, the Outlaws waited patiently for two weeks to play again after rain forced the Series to postpone its date at Riverside International Speedway in West Memphis, AR on April 21 to May 3 (and later to October 18). The Spring Classic at Federated Auto Parts Raceway at I-55 on April 22 was cancelled due to rain.

When the Series returned to action at Indiana’s Plymouth Speedway on April 28, it was the first race in the Eastern Time Zone since February 19 and David Gravel grabbed his fifth win of the season. Rain resulted in the postponement of the April 29 race at Tri-State Speedway in Haubstadt, IN to May 14.

Just when the Outlaw contingent felt they had wrangled Schatz under control by holding him winless in 10 starts, the Fargo, ND native swept the first weekend of May at Missouri State Fair Speedway in Sedalia, MO on May 5 and at 81 Speedway in Park City, KS on May 6.

“Sometimes you pay the price and April was that time, so May is going a lot better,” Schatz said at 81 Speedway following his eighth win of the season.

The World of Outlaws Craftsman Sprint Car Series 2017 season continues with several big events leading into the busy summer months. It begins with a tripleheader this weekend as the Series visits Eldora Speedway in Rossburg, OH on May 12 and 13 for the #LetsRaceTwo weekend before the rescheduled stop at Tri-State Speedway in Haubstadt, IN on May 14.

The Series’ first trip to Pennsylvania in 2017 takes place May 17-20 with visits to Lincoln Speedway and Williams Grove for the Morgan Cup. The Outlaws also visit Jackson Motorplex in Jackson, MN for the 39th annual ACGO Jackson Nationals June 1-3.

Outlaw drivers will have their only tune-up at Knoxville Raceway prior to the Knoxville Nationals when the Series visits the Iowa track on June 9-10. The month of June will also see the Outlaws race in Minnesota, Nebraska, North Dakota, Wisconsin and a trip to Illinois for the second annual Outlaw Clay Classic at The Dirt Oval at Route 66 on June 27. For a full schedule of upcoming events, visit www.woosprint.com/schedule.