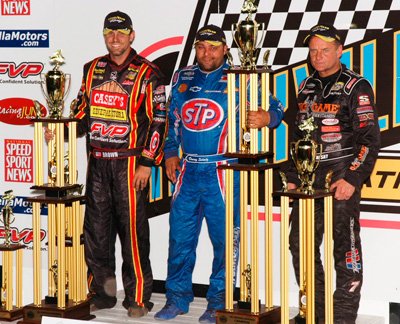 Kinser, Swindell both fail to advance to the feature for the first time since 1975

Simply put, the packed Knoxville Raceway grandstands were wowed before the 52nd annual Goodyear Knoxville Nationals feature hit the track on Saturday. Then, the near capacity crowd was on its feet at the checkered flag as Donny Schatz recorded his sixth Nationals victory in the last seven years after outlasting Brian Brown by 0.117 seconds to earn the $150,000 prize.

“There’s something about this place when we come here for the Nationals, it’s game on,” Schatz said. “It takes everything to be right. When you get on it and get it right, it’s something that you can keep bringing back here. That’s why we’ve been able to get this success because the baseline we have for coming here is an awesome baseline.”

History was made before the green flag waved as two of the sports’ biggest stars – Steve Kinser and Sammy Swindell – failed to advance to the feature. It was the first time since 1975 that neither driver earned a spot in the prestigious event. For Kinser, it snapped a Knoxville Nationals best 34-year streak in the main event.

“There’s a lot of disappointment to not see those guys,” Schatz said. “Those guys paved the way. To see those guys not in the show, it’s really disheartening. That just goes to show how tough this week really is.”

There wasn’t much time for disbelief as the 50-lap feature was pushed off several minutes after the B Main ended because of the threat of an incoming storm. Once the green flag was waved, the focus turned to the side-by-side action on the famed half mile.

Schatz drove from his fifth starting position to third place on the opening lap and passed Jonathan Allard for the runner-up position as the duo exited turn four on the sixth lap. Schatz then chased down polesitter Stevie Smith, who led the first 13 laps before Schatz took over the top spot as the drivers exited turn four in traffic on the 14th lap.

The scheduled red flag for a fuel stop came on lap 27, erasing a solid lead for Schatz. However, once the race resumed, it took only three laps for him to build nearly a three-second advantage. Once he entered traffic on lap 35, Schatz led by more than four seconds.

Before the lap was completed, Kyle Larson brought out the second-and-final caution when he stopped in turn four. With the field bunched together, Brown slid Craig Dollansky for second place in turn four on the restart and set his sights on Schatz.

With 13 laps remaining, Schatz led by a little more than one second. However, as both drivers ran the cushion around the track, Brown cut the deficit to .440 seconds with 10 laps to go before he jumped the cushion in turn two.

Traffic began to play a role in the final seven laps and Brown reeled Schatz to within a couple of car lengths before the cushion in turn two slowed him once again with a handful of laps remaining. Schatz had all but sealed the victory on the final lap before he was slowed exiting turn four while trying to lap two cars.

Brown’s momentum sucked him to the back of Schatz’s car and the duo drag raced to the checkered flag, which Schatz reached first by approximately half a car length.

“It’s real just surreal to be up her with Donny Schatz and all these champions,” Brown said after his career-best finish in the event. “I never figured I’d be in the Knoxville Nationals, let alone run second.

Dollansky tied his career-best result by rounding out the podium.

“My hat’s off to Donny,” he said. “Six of these things, that’s quite an accomplishment.”

Larson, who won a preliminary feature and finished 16th in Saturday’s main event, claimed the Knoxville Nationals Rookie of the Year.