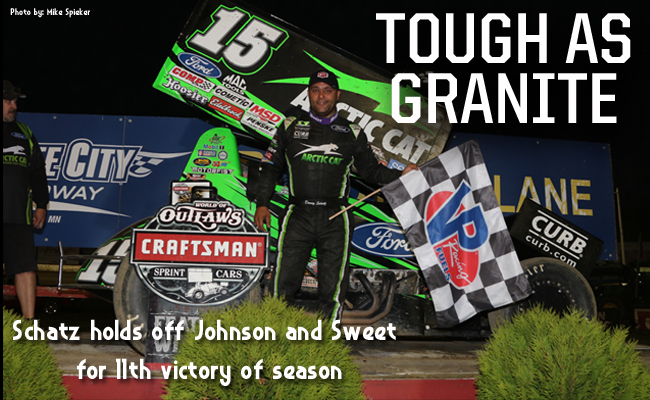 SAUX RAPIDS, M.N. —June 20, 2017 — In what looked like it was Jason Johnson’s night at Granite City Speedway, Donny Schatz capitalized on a mid-race restart. Schatz drove under Johnson exiting Turn 4 to get by for the lead. Schatz had to hold off a determined Johnson and the KSE Hard Charger Brad Sweet to pick up his 11th victory of the World of Outlaws Craftsman® Sprint Car season.

Looking for the clean sweep on the evening, Jason Johnson got the early jump on the 30-lap Feature at Granite City Speedway. Opening up a five-car length lead over the eight-time and defending World of Outlaws Craftsman Sprint Car Series champion, Donny Schatz. Just shy of the halfway point of the 30-lap race, a yellow flag was displayed for a slowed Ian Madsen who had a flat tire.

On the ensuing restart, Johnson looked like he was going to pick up where he left off, rocketing out to a quick lead over Schatz. As the field made their way down the backstretch, Johnson choose to enter Turn 3 on the top-side, leaving Schatz the bottom.

“[Schatz] just knew what he needed to do to get by me on that restart,” said Jason Johnson. “We had a car just as fast as his.”

“Races aren’t won on the start, a lot of people never figure that out,” said Donny Schatz. “We just wait for an opportunity. We got a run on [Jason] on the start and we went down the back and he decided to go up top into three and I went where he didn’t and we were able to get by.”

At the same time, Sweet wanted a piece of the action having got by Madsen on the restart for third place.

“The car was really good in the beginning,” said Brad Sweet.

With Schatz out front, Johnson and Sweet were nipping at his heels.

The top-three all within a half-second of each other had to contend with lap traffic the remain half of the race. That didn’t seem to slow them down as the three were trading positions looking to pick up their next win on the season.

“I threw everything I knew I had at [Schatz] to try to get by him,” added Johnson. “We like to win for sure. Anytime you can race with Donny and battle with [Donny], it’s a lot of fun. [Schatz] is one of the cleaner racers out here.”

The final five laps of the race it looked like it could have to gone to Schatz, Johnson or Sweet all trading positions back and forth. Schatz was just able to pick his line and get through heavy lap traffic first to power his way home for his 11th victory of the 2017 World of Outlaws Craftsman Sprint Car season.

“I think everything raises the heartrate,” said Donny Schatz in Victory Lane. “There’s a lot of great racers out here right now and they’ve got their game on. These Arctic Cat guys are in the same boat. They work their tails off to be good. We were a lot better earlier in the night – that’s kind of odd, usually we get better as the night goes on. We got the job done and that’s about it.”

Sweet who started on the outside of the fifth row of the Feature, charged his way forward and looked like he had something for both Schatz and Johnson picked up the KSE Hard Charger award.

“Lap cars just didn’t play out or if we got [Johnson], [Johnson] got us back. This NAPA Auto Parts car has been really fast, we put ourselves a little behind tonight but it was nice to drive up in there. If we keep having cars like this, we’ll be able to win some more of these.”